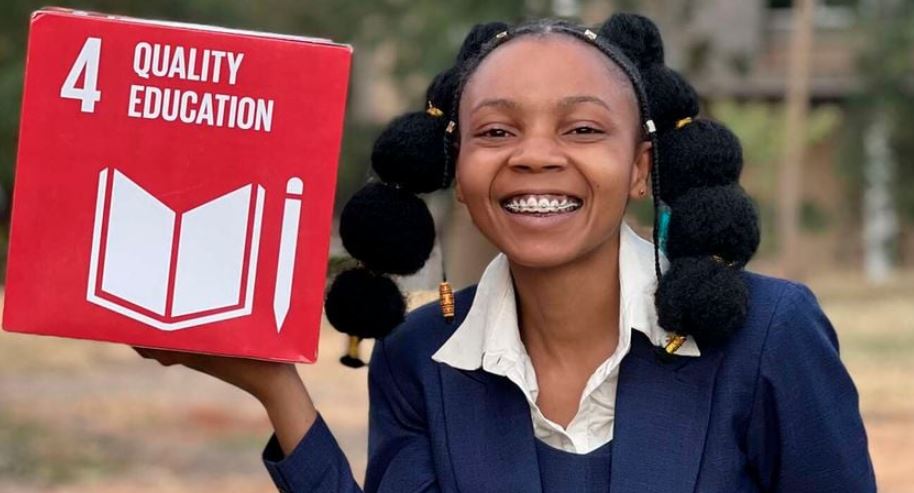 Cynthia Nyongesa, 27, founded the blog and brand ‘Cynthia Untamed’ to highlight the stories of young people who are positively impacting their communities.

An International Human Rights Lawyer, Nyongesa works with UNICEF Kenya as a Youth Advocate. She is also a youth leader ambassador of global partnership of education.

I have always wanted to ask, is your name ‘Oprah’ or does it have something to do with the other Oprah?

Hahaha, it’s about Oprah Winfrey. One of my lecturers back at the University of Nairobi thought that I smiled like Oprah and when I searched for her online, I decided to use that as my nickname.

I meet many people who describe you as aggressive. Where does it come from?

(Laughs). I am happy to hear some people say that because those are the exact words, I could use to describe myself. I was not doing very well in secondary school, and I think I had a problem fitting in at a national school. I discussed this with the deputy principal who gave me a book on incredible women in Kenya to read. It was a game-changer. I moved from an average to above average student. I ended up looking for some of those women after high school. They inspired me to be full of hope.

Let’s talk more about the Alliance girl factor. Are there other takeaways from the institution?

Ah, I like that. We were constantly reminded that we are the most incredible and smart women that Kenya needs in the different sectors. On our last night at school, we had a mentoring session, and we sang the song “Go light the world”.

We’re coming to the close of the year. How was your 2022—greatest wins and losses?

Like you’ve mentioned, 2022 has been two sides of a coin for me. Early in the year, I was disappointed because I couldn’t get a law firm to intern with and I had to go online to ask for help. I later got a job as a researcher with BBC. It was an exciting transition from Unicef but I think it was not the right moment. I had to quit but it luckily coincided with my pupillage. In between, I participated in the reality television programme— Ms president season 2 by Media Focus Africa.

I went in thinking that I am the best, but I met women from different counties who are exceptional leaders, brilliant and well-read. I was challenged to step up.

When I was eliminated from the competition, I was at a point in my life where I needed a win. I almost lost the momentum to apply for other opportunities.

On the flip side, there have been big wins. Like speaking and moderating a high-level meeting during this year’s UN general assembly transforming education summit because of my work on education advocacy. Also, I recently got a full scholarship from the Mandela Rhodes Foundation to study for a master’s degree in law at the university of Cape town. I am hoping to specialize in public international law. Another win is being selected as part of the first cohort of Mwalimu Nyerere Pan-African leaders fellowship.

Nowadays, I meet many young people who are doing exceptionally well. What is it about you guys?

I think we have discovered that we have so much potential and confidence in our abilities. We don’t care much about what other people think. In my experience, I have met incredible people who have mentored me to be the person that I am today. They have helped shape my worldview and encouraged me to keep pushing even amidst challenges.

You’re a youth leader ambassador of global partnership of education. Tell us more about this.

Kenya being one of the benefiting countries, hosted “Raise Your Hand” financing campaign with the collaboration of the United Kingdom and the target was to raise $5 billion.

As a young advocate identified in the community, my role was to engage policymakers, push for countries to invest in education and raise the visibility of education advocates in the various communities. I got to interview global champions for education, and engaged with decision-makers. In the end, they raised $ 4 billion.

What does education mean to you?

Education is an opportunity to be empowered, expand mindsets and think about the world more critically. There’s a recent report by the World Bank that shows one in 3 ten-year-olds globally cannot read.

At 27, you’ve stepped foot in places that many can only dream of. Is there a place that keeps its doors shut?

I think I am too young to conclude that there are doors that keep shutting because, over the last few years, I have had many firsts. I have travelled to many new places and instead of doors closing, I think they are opening. Some, albeit slowly.

What lessons do you draw from all these experiences?

I have learnt in pursuit of one’s dreams, many challenges will come along the way, but you need to be determined and resilient. I keep asking myself what I want and where I want to be in the next couple of years and work towards that. Also, embrace your uniqueness, learn from other people and put your dreams in God’s hands. He doesn’t disappoint.

Who inspires you a lot?

I am inspired by many people but if I have to give names, I’d go with Michelle Obama and Amal Clooney, who specialises in international law and human rights. I feel that there are a lot of similarities between these two women and myself. My parents also inspire me a lot.