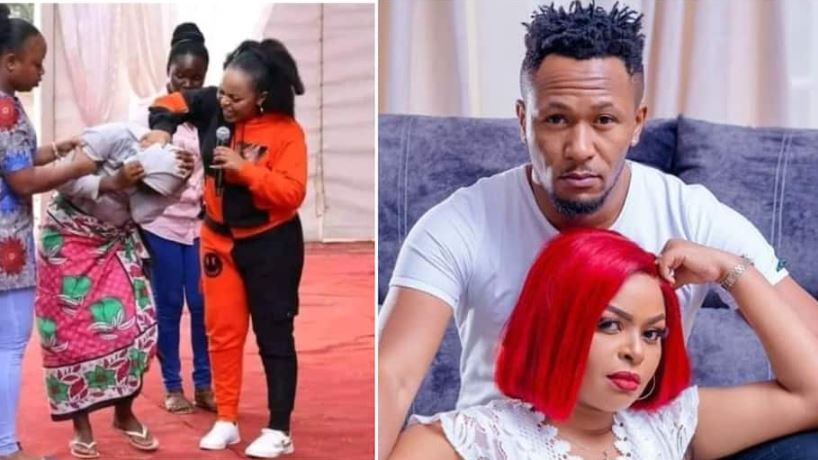 Celebrity DJ Sammy Muraya (DJ Mo) has lept to the defense of his wife Linet Munyali (Size 8) following backlash over her supposed ability to perform miracles.

Since she was ordained as a preacher in December 2021, the former secular-turned-gospel singer has on a number of occasions been accused of being a fake miracle worker.

The most recent criticism came after a video of Size 8 exorcising demons from people in her church was widely shared online.

In the clip, Size 8 was filmed casting out demons from a woman she claimed is a pastor but had been held by demons.

DJ Mo has now spoken insisting that his wife’s miracles are genuine. In an interview with Mungai Eve, the DJ said he would be more concerned if Size 8 was not getting criticized.

“I would be so worried if people didn’t criticise her. Otherwise, I would be like, ‘Eeh, you are doing something wrong.’ If the miracles are fake, then where are the genuine ones?” he posed.

“I have never seen a pastor whose miracles are believed,” he added.

DJ Mo said he knows for a fact that the miracles are genuine.

“I would be so worried if everyone clapped for her. I have been with her and I know the miracles are very genuine.

“I am happy because I am here to support her. I will support her to the end. So if you think it’s clout chasing, well and good, but on the other hand, people are being trustful.”

DJ Mo said Size 8 prayed for a sick woman during their Kibwezi crusade, and the woman was healed.

Size 8 on her part said she is not fazed by her doubters and naysayers.

“It is normal, Jesus said when you leave the world and follow me, you will be persecuted. So I’m not the first one. But there are people through my ministry, by the grace of God, who have been blessed. God has blessed them abundantly, He has changed their lives, and delivered them and they have testimonies. Tangible testimonies,” she told Mungai Eve.

Size 8 said her doubters only make her more popular.

“Vile nilikuwa Kibwezi, it is critics who made that meeting famous. It is them that made people watch the videos from the crowd. TB Joshua used to say my critics are my greatest advertisers. You are advertising me. You are putting me on your page for free,” she said.

Lewandowski in Search of the Coveted Golden Ball < Previous
Kelvin Kinuthia Loses 9 Kgs After Spending Ksh450,000 on Weight Loss Procedure Next >
Recommended stories you may like: