Ruto on CNN: Kenyans Wonder Why Arab Leaders are Not Asked About LGBTQ Rights 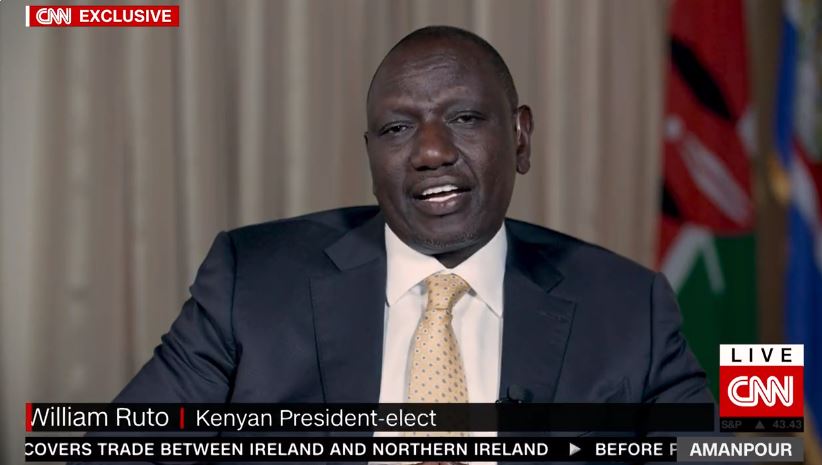 President-elect William Ruto on Wednesday night appeared on CNN in a pre-recorded interview.

The current Deputy President sat down with Christiane Amanpour to discuss among other things his election to the top seat in the country.

Asked whether President Uhuru Kenyatta has congratulated him, Ruto said that had not happened, but reiterated that his support for Uhuru in 2013 and 2017 was not on condition of reciprocal support in 2022.

“Unfortunately, President Kenyatta has not seen it fit to congratulate me,” he said. “Maybe he’s a bit disillusioned or maybe he’s unhappy that I defeated his candidate, but that is the nature of politics.”

As has become tradition with CNN and other Western media whenever they interview an African leader, the question of LGBT rights came up.

Like his boss before him, Ruto downplayed the issue, saying that Kenyans have more pertinent problems right now, and LGBTQ rights are not some of them.

The president-elect was first reminded of his past statement that Kenya has no room for homosexuality. He told Amanpour that Kenya has its own customs and traditions, and that they respect other people’s customs but also expect ours to be respected.

Gay sex is illegal in Kenya and President-elect @WilliamsRuto previously said “we have no room for gays.” Ruto tells me “we respect everybody,” but adds “this is not a big issue for the people of Kenya” and President Kenyatta was “spot on” to say homosexuality “is not agreeable.” pic.twitter.com/qLN3Ss0p2G

Following that interview, there were some legitimate queries by Kenyans and other Africans on why only leaders from this continent are asked about the LGBT rights issue, when the same is far much worse in Arab countries.

This has been such a bizarre talking point from western officials & press given the fact that they know that African populations are overwhelmingly hostile to this. So why keep at it? They don’t do this in the Middle East. Doing this puts a target on our LGBT citizens backs ☹️ https://t.co/hrn9CVINkt

I hate the way Americans keep on asking African leaders about the LGBT issues. They should know Africa isn’t interested with those kind of talks we’ve more issues to put our energy into and not concentrate on LGBT things 😡😡

If they love then they shouldn’t involve us

There are questions reserved for African Presidents by the Western media. Questions that have nothing to do with food security, access to clean water, education and healthcare. These are not critical in their view.

Why does the western media lay so much emphasis on this?

Does a man pressing another man's nyash add any economic value to the society?

Will it help bring about any development in Kenya ?

How dare she not ask about the price of Unga ? https://t.co/xv0b0nw2xF

The goal of this stupid question by @amanpour is to push and impose the Western culture on us. Kenya is a sovereign state with a CLEAR Constitution and we have our own culture that MUST be respected. https://t.co/7dxlkQyhp4

Qatar came out openly to declare that they’re anti-lgbtq, pls why haven’t you used your “investigative journalism” to find out why they’ve done so? Why haven’t you asked Vladimir Putin this question as well? Or Is it only when it comes to Africa that you remember “human rights”? https://t.co/a9SMgm8rci

Western countries clearly don't have enough problems that's why they always try to force LGBTQ down the throat of Africans. Can @amanpour ask this same question to the leaders of Islamic countries ? SMH https://t.co/nDlHqzcbp7

Dear @amanpour , why don’t you ever ask these LGBTQ+ questions to your buddies in Saudi, UAE and Qatar for instance? Mohammed bin Salman is quite eloquent enough, so language wouldn’t be a barrier. It is very disrespectful & a tad racist, that you ask these to African leaders. https://t.co/47nguh7DbM

Do you ask Islamic/Arab countries these type of questions or is it reserved for only African countries? https://t.co/kkaS1dKqWP

If western media keeps patronising African leaders this way, their influence will continue to erode. No Middle Eastern ruler will get this question. @amanpour will even wear a hijab just to be in their presence.

You dare not ask Putin this weird questions… He will throw you back to a box!
It is man and woman not man and man!
There are too many issues in the world than all this crap questions…
I think we should also ask them about polygamy! https://t.co/f5BQPfb423

This is when you're always trying to impose your will on other people. Homosexuality is not an issue in many parts of the world. The west should understand this. We have other more significant and pressing issues in Africa. https://t.co/R6FcafE0i6

Do they ever ask Islamic Nations Leader this question?🤔 https://t.co/MY9sqbsA2w

Out of curiosity, do they raise these lgbtq issues with Middle-Eastern countries too? Or is it just Africa? https://t.co/hkqiViY8pl

Very disappointing Questions @amanpour , we don’t see these questions when you interview Leaders from the Middle East . This desperate attempt to Force homophobic Rhetorics out of Africans on Air needs to Stop. https://t.co/rPbbVn26gq

I am not a religious person & probably not interested what consenting adults do in private. However I don't understand why African Presidents are targeted with #LGBTQ agenda after winning elections. I don't believe in a white society overestimating their importance to Africa 🧵 https://t.co/iJenqmBQZ6

Why is this such an urgent question for Western journalists to African heads of state, in particular?
Are they asking China or KSA this question? https://t.co/xyLH6KUtjv

Uhuru: I Will Be Smiling During Power Handover, But Raila is My President < Previous
The Top 5 Heart-Pounding Thrillers That Will Keep You On the Edge of Your Seat Next >
Recommended stories you may like: