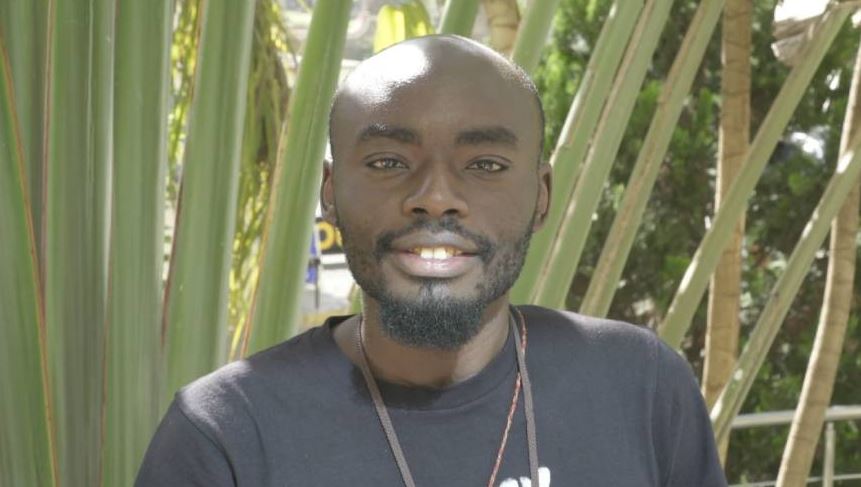 He shares his story, including how he turned to writing poetry to overcome grief.

My full name is Eric Onyango Otieno, a Kenyan poet, born and bred in Nairobi. I’m the firstborn in a family of three. I began writing poetry at the age of 16; it came as a result of undergoing depression. My father was quite harsh.

In 2004 when I was 16, I lost my sister who was about five months old. This was a blow to me. With the situation around my family, I was left alone to handle my pain.

I was expelled from school. So, most of the time I used to read magazines and listen to the radio.  In that process of mourning my sister who no one could explain to me what death was by then, I converted my grief into writing poems. This was my only way to ease my pain.

Tell us more about the poetry?

My first poem was ‘A letter to the grave’ it was dedicated to my late sister, whom I watched die. It was an imagination that had she been alive she’d be there as a shoulder to lean on during my tough times. This was the time depression was slowly creeping in, I had absorbed a lot, from experiencing the daily violence that was happening at home to losing my only sister whom I hoped would be there as a listening ear.

Why is it important for parents to involve their kids in their grief?

Most of the time whenever a calamity like death occurs, parents tend to mourn alone, and kids are pushed aside. No one explains to them what death means and why they are never going to see that person or why they being buried.

All this happens as the kids watch but lack answers to fill their worries. So I would urge parents to learn to share with their kids. Death hurts everyone not only older people alone.

Were there aspects of writing about your sister in which you discovered a power of writing?

Yes, during that period, I had a diary, which I wrote a lot, it was the only space that I could relieve my feelings and fear. In that loneliness and despair, I wrote three poems.

Take us through your journey of recovery. When did you discover that you were suffering from depression, and how did you survive it?

In that struggle of trying to show that I want to be heard, I ran away from home twice, once becoming a street child in Nairobi Central Business District for quite some time. As a street kid, I survived mob justice on June 20, 2004, after being caught shoplifting in a supermarket. I became suicidal and this sent an alarm that I needed some help. I remember being taken to a witch doctor in a dark, dingy place, and he performed on me, but a solution was not found. I finally ended up seeking a psychologist.

It’s evident that you are such a creative and powerful writer, how did you sharpen your literary skills?

I grew up speaking sheng, so becoming a writer was the last thing on my mind. But I loved languages, and I fell in love with Literature when I joined Form 1. I began writing music.

A year later, after being expelled from school and reading newspaper articles, I got inspired to be a journalist. After going back to school, I was made Editor-In-Chief of the Journalism Club. By the time I joined campus, I knew something great was brewing in me. But I didn’t finish campus due to family issues. I decided to use what I had to make something of my life and that’s how my poetry picked after a share on social media.

It keeps changing. When I began, writing was for catharsis. Then it grew to helping others express themselves, Then to speaking out on heavy issues of mind, body, and soul. I ventured into social justice and spirituality.

I never quite put a method into my process. When I was younger, I’d take a topic and force myself to write on it. It was good training because these days I can do that when it is for payment and still manage to create quality work.

Today, my process is a bit more complex. I have to be attentive to everything I can hear. I have to take things in as deeply as possible. I have to interrogate myself, question my beliefs, develop a language and a tone, ask the right and wrong questions, try something new, watch, digest, interact with material that opposes my world views, evaluate, then pen.

How much do your life experiences influence your work?

By virtue of writing out of personal experiences, I speak for another who went through similar things thinking they were alone. Then, we’re able to connect. That’s how I have grown my readership over the years. Writing material that people meet in their daily lives but have never thought of expressing or lacked ways to do it.