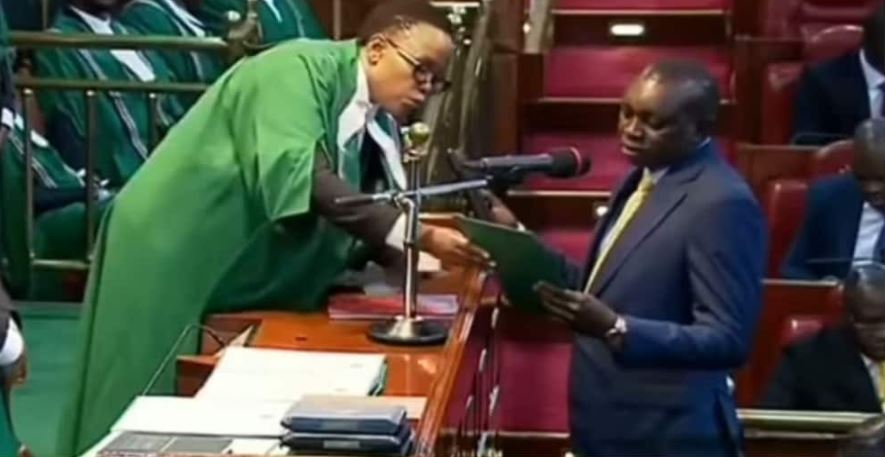 Remember when Kenyans online made fun of Oscar Sudi for marveling at the Dubai fountain when he accompanied Ruto to visit Moses Kuria in February of this year?

Well, the Kapseret MP is once again the butt of jokes on social media after he fumbled his Oath of Office as MPs and Senators were being sworn in on Thursday, September 8.

A video shared online shows Sudi mumbling through his Oath, with the Clerk of the National Assembly intervening at some point to help the lawmaker.

Among the many inaudible mumbles Oscar Sudi let out, one word that most netizens heard clearly was “marliament” instead of Parliament.

Notably, Sudi’s struggles with the Queen’s language came a day after he skipped the hearing of his fake academic certificates case at the Milimani Law Courts.

Sudi’s lawyers, among them Prof George Wajackoyah, told Chief Magistrate Felix Kombo that MP could not attend as he is part of President William Ruto’s Assumption of Office committee.

On Wednesday, the court also heard that Oscar Sudi might be a Class 7 dropout.

Sudi’s former mathematics teacher at Tulwopng’etuny Primary School in Uasin Gishu County said he was unsure where the MP went after class 7.

“Did you teach Sudi?” the prosecution asked Cherop, to which he responded: “Yes. I taught him Maths in classes 6 and 7.”

The teacher added: “The accused had enrolled in that school as a pupil from standard six to seven but did not clear his primary level in the said school.”

The case was adjourned to November 22.

Watch a video of Oscar Sudi taking his Oath below and some reactions from Kenyans on Twitter.

As member of merliament😂😂. Even when it’s written 😅

Did I hear member of maliamen

As a member of Maliament Iko tu sawa

Oscar Sudi reading his own things.

Thy had to confirm if they gave him the right script 😂😂😂😂 https://t.co/svlRrMjo5B

i am crying hahahahaha bro being sudi is not easy https://t.co/kKdUbuuoMt

All The Trending Memes and Tweets This Friday < Previous
Why Kalonzo Pulled Out of Senate Speaker Race: “It Was Not Impromptu” Next >
Recommended stories you may like: