Kenyans Agree With Reuben Kigame That Ruto is Overdoing Religion 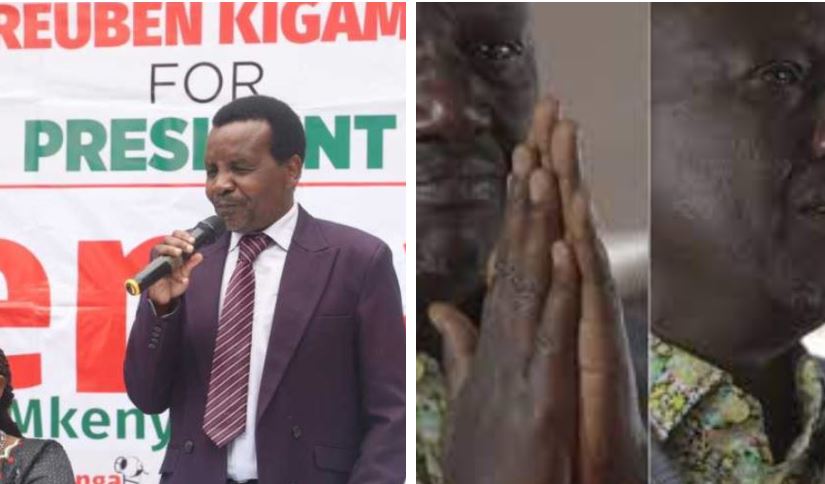 Evangelist Reuben Kigame on Thursday sparked an engaging debate among social media users after he called out President Ruto for overdoing religion.

In a well-articulated Twitter thread, the Presidential aspirant said the Executive officer should be guided by Article 27 of the constitution.

“I know I will be bashed but I need to be truthful and accountable to the nation. I think the Ruto administration is overdoing religion. While we acknowledge the hand of God in bringing us this far, presidency must observe Article 27 of the constitution,” the first tweet reads.

The veteran gospel musician took issue with the inauguration of President Ruto and his Deputy Rigathi Gachagua saying it was inundated with religion.

“During the inauguration, the evangelical wing of the church was overrepresented. this was unnecessary. I do not know what the transition committee intended to prove to Kenya and the watching world,” Kigame wondered.

Noting that he is a devout Christian himself, Kigame said the church should play a neutral, balanced and truthful role.

“I am a committed Christian who believes in prayer and believe God has helped us this far and Will continue to trust Him for the future of Kenya, but I hope that issues such as lowering food prices will not be met with State house saying, “let’s pray about it”.

“I strongly believe that the church should play A neutral, prophetic, balanced and truthful role in order to provide a true spiritual direction for the country. it should congratulate the king but also be prepared to tell the king that he is naked should he be,” he concluded.

Kigame’s statement evoked lots of mixed reactions, with the majority of Twitter users agreeing with him.

We have compiled some tweets below.

They will say you’re jealous of their God. Be careful.

I did not know that there is their God and another who is mine.

There is absolutely nothing wrong with anyone exercising their faith. I just think that it should not be overdone. The German Church missed the mark in Hitler’s day. some German Christians that time even supported his hatred for and extermination of the Jews. Terrible memory.

The church is a perfect cover for them. The church itself doesn’t allow it’s members to question them.

True, Kenya should separate religion from governance, it’s starting to look like Afghanistan

He is a pastor and he knows that. Reread what he said again. Religion is good but let’s not be hypocrites. It is a warning he was giving. As a pastor it is his duty.

I hypocrite is hiding behind God instead of owning up to the mistake. He never said overrepresentation. He is talking about overdoing. There is a difference. It is the same thing as committing sin because God’s grace is available. He just spoke the bitter truth that many won’t.

This is honest, constructive criticism. It is much welcome at least from where I sit and stand.

Thank you for pointing out the con pic.twitter.com/L0MZmPvjRQ

It is the opium of the masses.But someone should remind the first family that Kenya is a secular state and Christianity is not a national religion.And kindly keep off those Ghanian and Nigerian pastors off state house

No am the landlady.

Bwana Kigame. You are a man full of wisdom.

You are absolutely right Reuben, many of us are having the same thoughts.

Thank you for saying the truth. The religion here is just being used for political milage.

Glorified poverty with a little touch of fanatical religion, the end product is disastrous https://t.co/aDKqhgAQpo

Don’t use prayers where common sense and accountability is required. https://t.co/6lQdgrwmkt

Us the lesser children will have our day some day too. Isn’t that what Faith is all about. Blind belief. https://t.co/OeNBu5dBwV

I’m glad other Kenyans are seeing this… Kenya must stay secular we don’t want another Tanzania in East Africa. https://t.co/tUIoXg2CWe

Article 8 of the Constitution. “There shall be no State religion.” Yes, it doesn’t mean we shouldn’t profess our faiths at all, but the Presidency is a symbol of unity. No one faith should be privileged over the rest. Kenya is a secular State. https://t.co/xAfHjQvNKo

True concerns here….. They might have attracted 7.2 Million Kenyans by the Hustler vs. Dynasty themes but they might break a country with their over emphasis on christianity…. Our Muslim brothers are watching https://t.co/gPQssuAKUO

What is your exact point Reuben?
That we should not shout our testimony, that when all the mighty, wealthy and powerful teamed up and planned our funeral, God delivered us? https://t.co/BNvBKpB3d8

It’s a con game.. When Kenyan’s realize nothing has changed and it’s basically people from the previous gvt that are in this new administration the critism will begin and ya’ll president & his deputy will run to the church, kneel down and claim the devil is working against them https://t.co/KYs4yCTQI1

This needed to be said, the Office of the first lady has it’s role and it’s not preaching. Kenya has other religions and the Christian extremism in Statehouse needs to be called out. https://t.co/3rBrkJ82Eu

Overdoing is the word 🙄 https://t.co/hXuGFCkLKv

I knew it was too much when Gachagua said that a prophet from Nigeria prophesied that Ruto and Gachagua would make it in a crusade in Kenol. Too many red flags https://t.co/Ej8ds6nWmy

Both the constitution and the Bible call for the separation of church and state. Article 8 of the Kenyan constitution states that “There shall be no state religion”. The Bible states “Give what belongs to Caesar to Caesar and unto God the things that are God’s”. https://t.co/Q96Q2LrBSh

To be honest, it’s extreme and it’s not sitting right with me. https://t.co/6nf9DOKSM5

Whilst the President and the First Lady are allowed to have strong religious beliefs, they must balance it with the fact that the President is a symbol of national unity and must conduct national events as such. https://t.co/aWYJdBw0s8

AMEN Reuben….anyone who over does religion is trying to fool people into not holding them accountable…we must disassociate mambo ya Mungu and State Affairs!!!!! https://t.co/Sr0wdygtGT

Since the day @IEBCKenya denied this dude a chance to compete with the spoilt votes, he has not been the same. Tweeting trash to clout chase, seek attention and relevance. @ReubenKigame calm down! https://t.co/k88wpS3np7

One of those who support the new government and I agree with these concerns. https://t.co/qkZBDtNAs5

This!!!!! There are numerous religions in this country we need to accept and respect that, not shove Christianity down people’s throats. I also believe that it is God who changes the hearts of men not believers so stop imposing beliefs! https://t.co/vvaSIqLaZ4

Finally someone has said it. https://t.co/dBWr3gz97y

Reuben Kigame is brave to say what most Christians, pastors and bishops don’t want to say.

What William Ruto and Rachael Ruto are doing is not good for the unity of this country.

They are overdoing religion. Kenya has no STATE RELIGION. We are a secular state!

Raila Odinga Shames The Supreme Court < Previous
Gang Carjacks Ex-Governor’s Aide, Uses his Land Rover in 10 Robberies in One Night Next >
Recommended stories you may like: