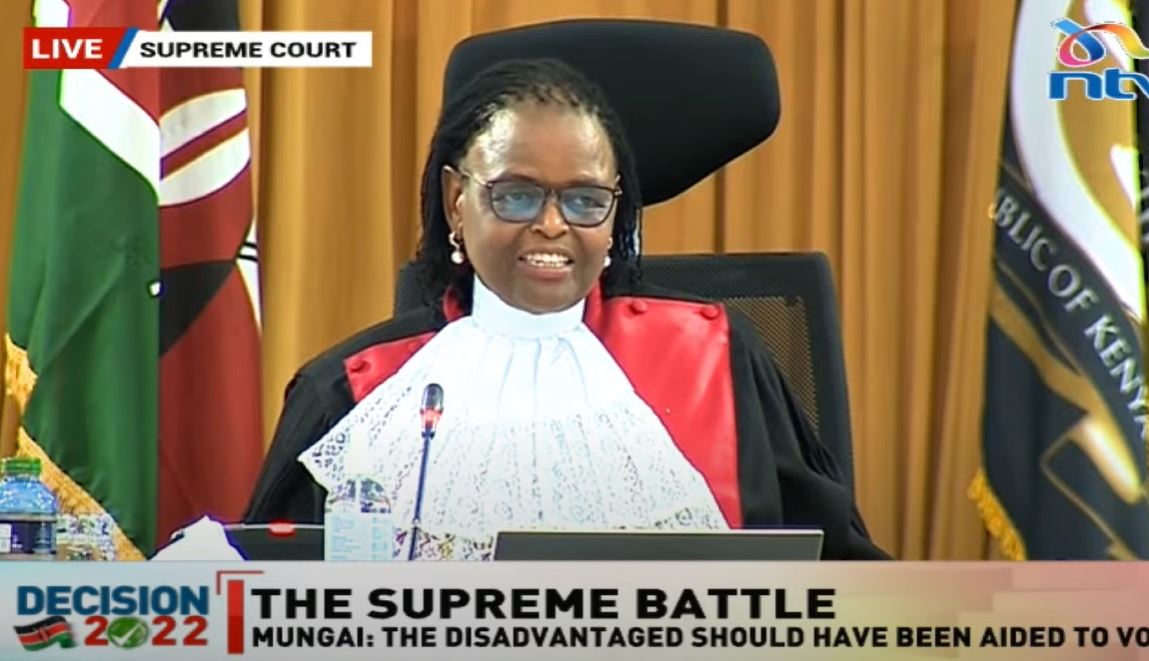 A Supreme Court ordered scrutiny and recount of ballots from select polling stations is complete.

The scrutiny, supervised by the registrar of the Supreme Court, was undertaken following a request by Azimio in the ongoing election petition.

It was part of an audit that also involved granting the petitioners supervised access to the IEBC election server.

The registrar released the final report on Thursday night, combining both the ICT scrutiny and the ballot boxes scrutiny into one document 178 pages long.

The main allegation that necessitated the ballot recount and scrutiny was Azimio’s assertion that Raila’s votes were given to Ruto, or that the Form 34As did not reflect an accurate count of the votes.

The petitioners handpicked the following polling stations/centres for the recount.

In total, there were 45 polling stations (ballot boxes) because some centres had several streams.

According to the court order, the registrar and other interested parties were to conduct an inspection, scrutiny and recount.

When it came to the recount, things did not pan out the way Azimio had said they would. It was found that in fact, the vote count was accurate and matched what was captured on Form 34As.

There was however one case where a single Raila vote was found in Ruto’s batch. Remember, votes for a candidate are rolled and sealed together in batches of 50 or lower, before being returned back into the ballot box.

The 1 wrongly batched vote was hardly the bombshell that was promised.

Despite the numbers not going their way, Azimio found a new ray of hope in the scrutiny of the ballot boxes. For instance, some boxes did not contain copies of Form 34As of Form 32As. Some copies of 34As were not stamped. Some were not sealed.

This was the registrar’s summary of observations and findings.

Presentation of Forms 32A
All the returning officers appearing before the scrutiny team indicated they did not use the manual register. They therefore had no Forms 32 A to present.

Presentation of Forms 34 A Book 2

6 polling stations did not present form 34A Book 2 at all, 26 presented intact/intact form 34A book 2s and 9 presented used form 34 A book 2s with varying numbers of carbonated copies.

The reasons given by the Returning officers is that some presiding officers mistook the two books because they did not understand the procedure.

Other returning officers had no explanation for the absence of form 34 A book 2. They indicated that they had just learnt of the anomaly together with the scrutiny. The Kiambaa constituency returning officer explained that her presiding officer used book 2 because he had spoilt book 1.

They however, they did not present the spoilt form 34A book 1 for the team’s scrutiny, and the PSD did not indicate that the form 34A book 2 had been spoilt. 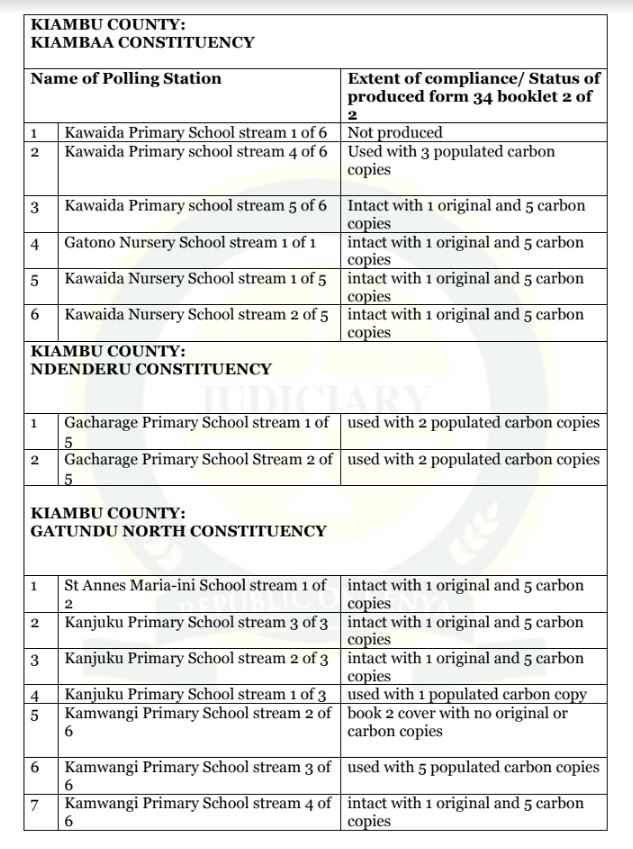 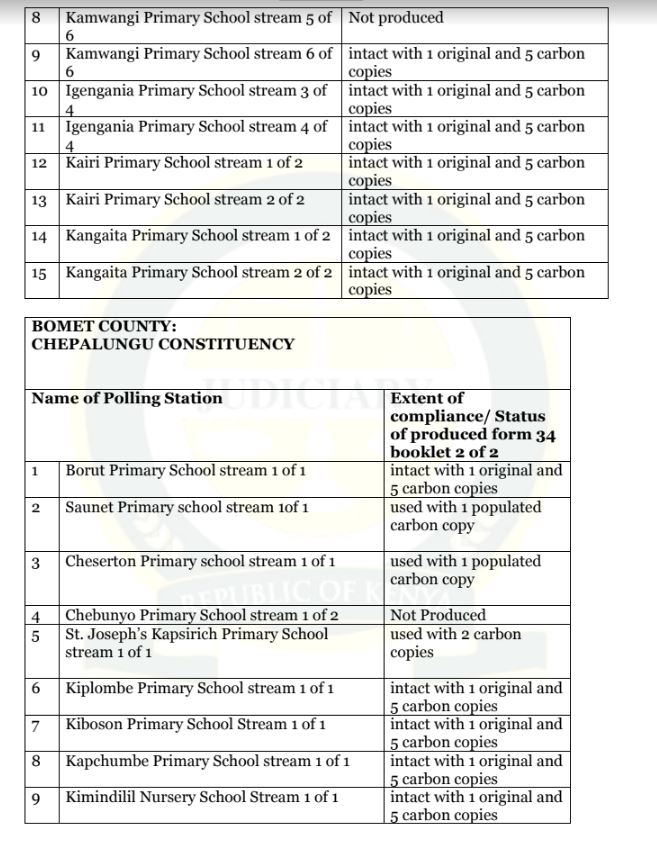 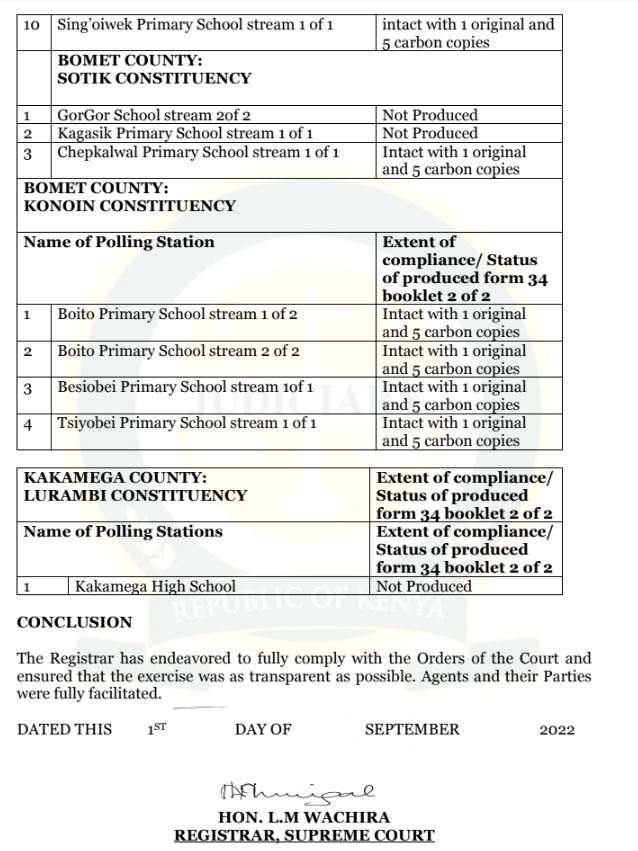 Despite ordering the recount and scrutiny, it remains to be seen how much importance the Supreme Court will put on the results of that exercise, especially because they have several other matters to determine.

It also remains to be seen whether the Supreme Court will put emphasis on the finality of numbers, or focus on the clerical errors witnessed in the ballot box scrutiny.

Below is a link to the full 178-page document.

How DJ Evolve is Doing As Babu Owino Continues to Support his Family < Previous
Benefits of Playing Direct Web Slots Next >
Recommended stories you may like:
Government To Regulate Foreign Artistes Performing in Kenya, CS Ababu