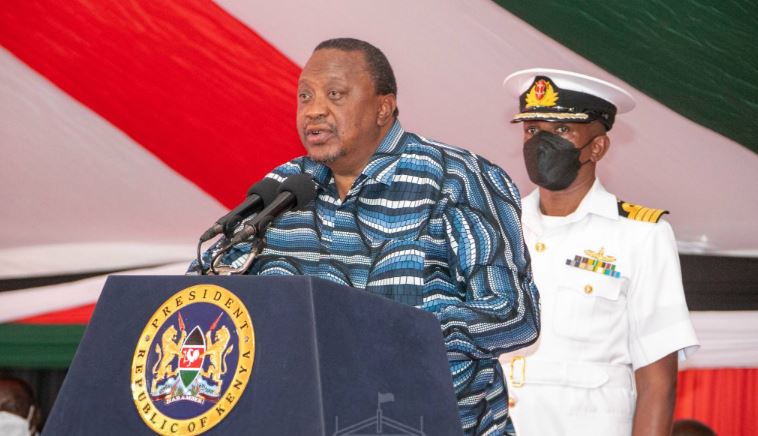 President Uhuru Kenyatta on Wednesday kicked off the latest phase of the national title deeds issuance programme that will see the immediate issuance of one million title deeds to land owners across the country.

“Today, we are launching and flagging off the issuance of 1 million out of 6 million title deeds that are ready across the registries in the various counties.

“The programme should be executed expeditiously such that before sunset on the Eighth of July, 2022 the balance of the one 1 million title deeds will have been conveyed to their holders,” President Kenyatta directed.

At the same time, the President highlighted several achievements under the reforms in the land sector, noting that the National Titling program, which his administration introduced in 2013, has helped in processing and issuing title deeds to many citizens.

“As part of this programme, we established the National Titling Centre, the Rapid Titling Initiative, Land Clinics and formed links with both land buying companies and County Governments. These progressive measures were buttressed by enhanced recruitment of technical staff and the deployment of other critical resources including motor vehicles and survey equipment,” he said. 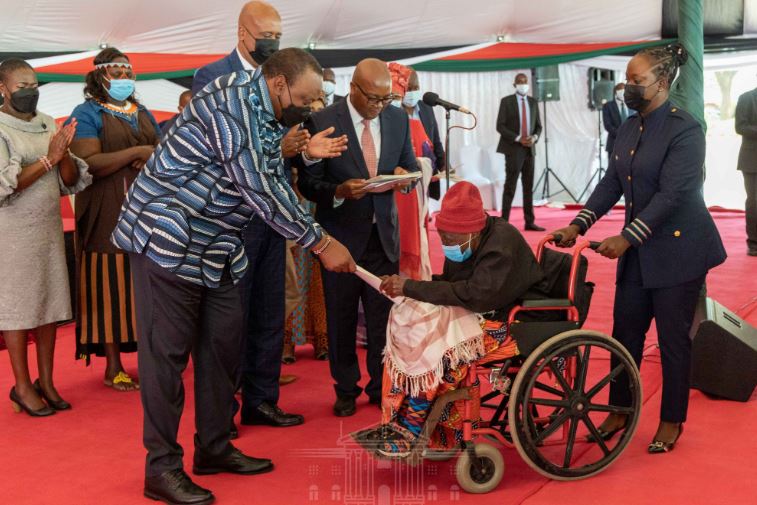 The Head of State noted that the national title deeds issuance programme has made it possible for Kenyans living in the marginalized areas such as Samburu, Isiolo and Marsabit counties to legally own land thereby empowering them to develop economically.

“I am honoured to have been the President who handed over a title deed to the first woman land owner in Marsabit; a feat that was unthinkable a decade ago when it was culturally held that women could not hold a title in land,” the President said.

President Kenyatta also pointed out that under the National Titling Programme, all beneficiaries living in the former colonial villages such as those in Nyandarua were issued with title deeds while the problem of long and protracted land cases in group ranches across the country was addressed.

“This programme has brought hope to where there was fear and despair; we have healed wounds and resolved the phenomena of protracted and acrimonious land disputes across the country; in places such as Kihiu Mwiri in Murang’a, Nyakinyua in Trans Nzoia, Mikanjuni in Kilifi, group ranches in Kajiado, Narok and Samburu, among others,” said President Kenyatta. 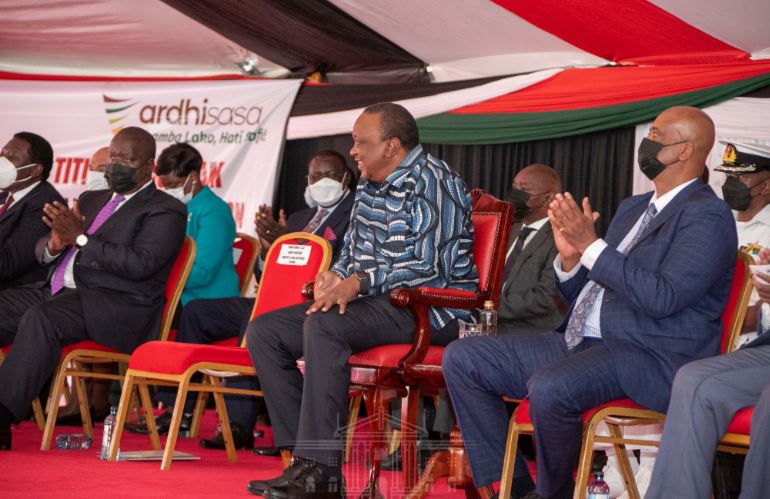 The President added that, through the programme, the Government has been able to secure the country’s natural resources and heritage sites which were under the threat of being grabbed.

“In addition, we have secured our natural resources and heritage sites like the Mau Forest, the Nairobi National Park, City Park and the Maasai Mara Game Reserve among others through the issuance of title deeds,” he added.

The Government is also documenting land belonging to public institutions while the Ministry of Lands and Physical Planning, working with partners in the education sector, has succeeded in titling parcels of land belonging to 20,000 schools and the surveying of 32,000 public schools.

President Kenyatta said his commitment to establishing an efficient, transparent and accountable land administration and management system saw the development and launch of the National Land Information Management System (NLIMS) commonly referred to as “Ardhisasa”, which has streamlined electronic land transactions.

He cited the example of the drastic reduction in the time taken to conduct land transactions from a minimum of six months per a transaction to 48 hours through the Ardhisasa as some of the achievements of the new system.

“Similarly, instead of taking between one and three months to conduct a land search, the system gives you a land search results in 3 to 5 minutes,” he said. 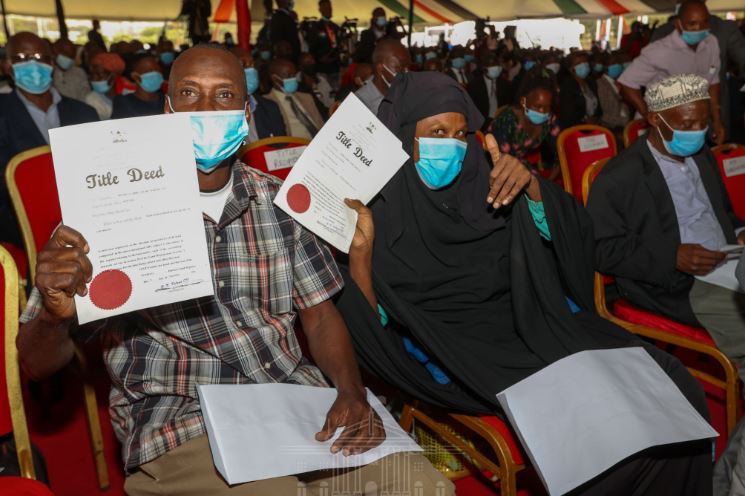 The Head of State also pointed out that the 2016 Community Land Act which he signed is a progressive law as it enables local communities to legally register and own communal lands.

He said previously an estimated 3.5 million people had been unable to register their communal lands covering roughly 150,000 square miles or 67% of Kenya’s landmass but with the new Act they have been able to successful legally own their land.

“Following this progressive legislation, we have been able to issue title deeds to group ranches in Laikipia, Samburu, Kajiado, West Pokot and Taita Taveta, an endevour which has uplifted over 500,000 people,” President Kenyatta said.

He disclosed that the national Government has been able to support devolved units and decentralised land administration services by gazetting additional 10 registries in Kajiado West, Kajiado South (Loitoktok), Yatta, Mutomo, Samburu, Malindi, Ruiru, Tigania West, Marimanti and Kiritiri, bringing the total number of registries across the country to an historic high of 67.

“Further, we are in the process of constructing 10 additional registries to promote efficient delivery of services in Hola, Kitui, Mbeere, Bomet, Ol Kalou, Naivasha, Nandi, Ruiru, Laikipia, and Samburu. The construction of these new registries will go a long way in facilitating the decentralization of the Ministry’s services,” the President said. 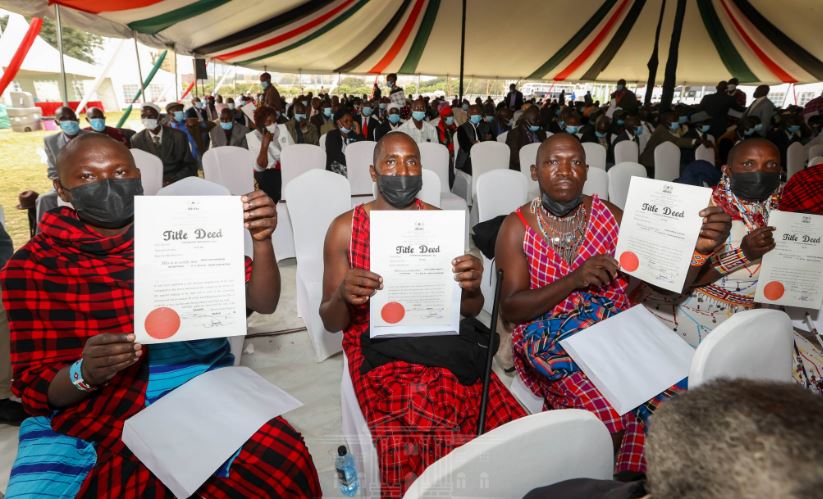 Lands CS Farida Karoney said her ministry has been able to achieve the targets set by the President through the implemented reforms that have facilitated registration of 6,1000,945 new title deeds.

“ This is a very significant number because you’ll be happy to note that the colonial government and our first three administration registered 6 million so actually it surpassed slightly the 6million registered in the past 100 years,” said the lands CS.

Susan Kihika is Not a Kenyan. She’s an American: EACC Told < Previous
Eldoret Court Sentences Man Who Beat Up Househelp For Praying For Too Long Next >
Recommended stories you may like: