My Story: I Was Raped at Gunpoint,, Turned To Alcohol to Numb the Pain 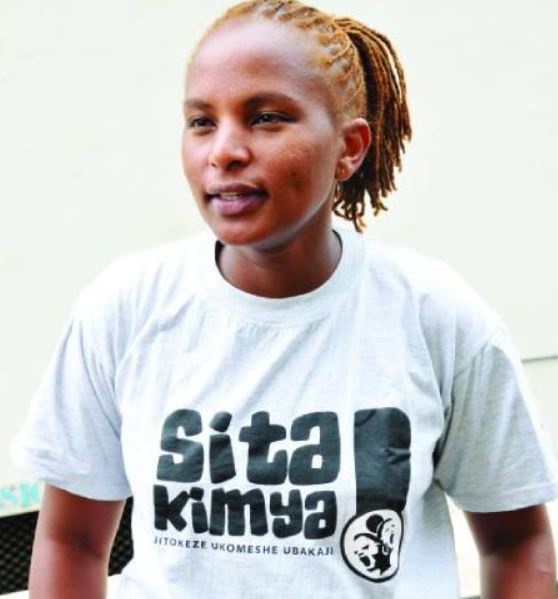 Wangu Kanja is a sexual violence survivor and an activist who set up the Wangu Kanja Foundation to support survivors of sexual and gender-based violence.

Kanja survived a brutal rape and a carjacking incident in 2002 when she was just 18 and has since dedicated her life to promoting prevention, protection and response in ending SGBV.

You run a foundation. What does it do?

Wangu Kanja Foundation focuses on sexual violence because that is what I went through. I understand what a person goes through and what kind of support one requires. We also accommodate survivors and victims of gender based violence, whether man or woman or child. I started my foundation in 2005 because my rape ordeal happened in 2002.

How did this incident affect you?

I have a background in marketing and accounting, but after my ordeal, I had to change everything and look at how best I can help my community or address some of the things in our community.

Your incident, was it someone you know?

No, it was a total stranger because it was a carjacking incident. The people who carjacked us were robbing us at gunpoint. I was raped at gunpoint. Rape is viewed as just sex but it is not, because it is a person taking you without consent.  For two and a half years, I went into depression, I had to figure out my healing journey and how I would come back to Wangu. I knew I wasn’t going to be the same Wangu but how I was going to? It is very difficult.

What did you learn about being a victim?

Our society does not talk openly about sex, so when you come out and say you are a rape survivor, they label you ‘that person that was raped’ and they actually put the burden on you because we think survivors put themselves in a position to be violated. We have women who have been raped in their houses, we should not put the burden on victims, instead, we should hold accountable the people causing these crimes.

Were the perpetrators ever brought to book?

The perpetrators were not brought to book because I could not identify them. Two, it’s a lengthy tiring frustrating process for so many people, cases take up to 10 years for one reason or another. I chose not to pursue justice, because it means a lot of waiting, needs a strong psycho-social system and also costly.

At what point did you decide to set up a foundation?

As a child, I wanted to do some charity work, but I didn’t know what exactly. After the incident, I decided to use my experience to help other people. One of my coping mechanisms during that time was alcohol. It is abnormal for anyone to want to numb their pain because it happens, some people would do it through sex, drugs, alcohol or other copying mechanisms.

I was seated in a bar, and I felt I needed to address what I was going through, it was difficult but I needed to come to terms with it. That is when I started having that conversation, I needed to find people to help me in my healing journey.

So what happened next?

The first thing I did is I joined Amani Counselling Center to do some training, I didn’t want one on one counselling. I did 30 hours of counselling and I managed to address some issues while there. In 2012, Inspired Individual programme recruited me and for two years, they focused on my rehabilitation, coaching, counselling mentorship and they walked with me.

Since establishing yourself, do you then just focus on yourself?

No, we have children and men too. Sadly, we can’t give the actual statistics because as a country, we don’t have proper mechanism to document. We need to have zero rape cases, for me, one rape case is one too many. I am hoping Kenyans would actually understand that is it more expensive to rehabilitate anyone who has gone through sexual or gender-based violence. We need to open a safe space where people can talk without fear or attracting stigma.

From the 16 days of activism that was marked last year, what came out of that?

The days are meant to address different forms of human rights violation, but it needs to be a conversation of every second. It creates a safe environment for people to feel that it is safe to talk about your experience without the fear of retaliation.

We have the Sexual Offenses Act; we have about 18 additional laws that protect or provide provisions for survivors of sexual violence. We have gaps and challenges on budget allocation, enforcement of the law and investigations.

What is your foundation doing in regards to closing those gaps?

We identified a number of gaps and we are reaching to different government institutions to have conversations with them. We are also bringing survivors to the table to have a conversation on what will and won’t work.

Which countries we can benchmark from in this case?

Rwanda and South Africa has best practices. Sexual violence should be a priority for any government for things to fall into place, we can’t leave it to civil society organizations.

Where should these conversations around sex and sexual violence be taking place?

From the home, that is where the conversation should start. Parents don’t talk to their children about anything in regards to sex or sexuality or even their bodies. Calling the right name of a private parts helps. If you go to court, it will take a long time to establish what a child says if he/she uses symbolic terms used in informal settlements. For me, we should have a candid conversation about sex. I don’t think God created sex to be a bad thing. Why are we using the tools meant for procreation and pleasure to introduce pain?

What are the primary roles of the foundation?

What is the first thing one should do in the event of rape?

Please go to a hospital, because then we are able to mitigate within 72 hours to prevent unwanted pregnancy, spread of sexually transmitted diseases and also preserve evidence. Make sure you report to the police, go with your medical report, if you don’t, the perpetrators will keep doing it to others. Most of the public healthcare facilities are offering post rape care services for free, if you go to a hospital and they charge you, please reach out to us and let us know.

Let’s call out people committing sexual violence crimes, if we don’t, we give survivors a lot of burden that it actually happened. Hold them accountable to save many lives. Walk with survivors as an individual to help them restore their dignity.