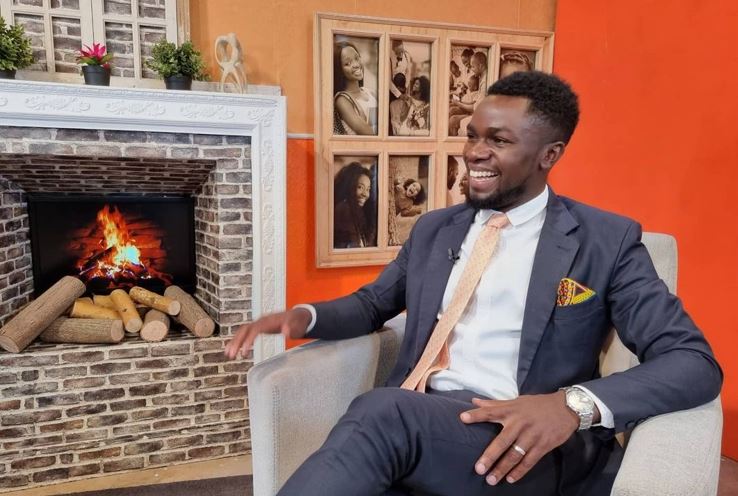 Give us a brief background of yourself and your YouTube channel.

My name is Justus Nandwa, a journalist and content creator. I’m the founder and host of “Shared Moments with Justus” YouTube channel. Through this channel, I produce inspiring stories with the aim of providing hope, shaping narratives, and encouraging people to make the best out of life. I identify people whose experiences are worth learning from and give them an opportunity to share their journey with the world through my platform. The channel started in 2020.

What inspired you to start the channel?

I have always loved listening to stories and learning from people’s experiences. The first time I did human interest stories was way back in 2009 at Langata Women’s Prison. The stories attracted millions of views. Ten years later, in 2019, I met one of the women I had done her prison story and this rekindled my passion for storytelling. I did a follow-up on her story the following year and created a YouTube channel just to share that one story. And that’s how I found myself sharing more and more.

I didn’t have much expectation from it. I was just sharing so that whoever gets a chance to watch it gets inspired. The channel didn’t have numbers, so it took quite a while before people could start watching. For a whole month, the story had less than 200 views.

When starting, did you ever feel like giving up? What kept you going?

That never crossed my mind. As I said I was not under pressure for numbers or anything. As the channel grew, I realised people were connecting with the content and that it was inspiring many. That pushed me to produce more content.

Did you ever imagine your audience would grow that fast?

No. It came as a surprise, but I immediately embraced it and built a brand around it.

How did you promote your channel when you first started?

I think the channel promoted itself. Every guest I hosted on the platform became an ambassador. The world also just connected with the stories we were sharing and inevitably all that translated to growth.

Many upcoming journalists believe one can only succeed by joining mainstream media. What’s your take?

Well, everyone has his or her space. There’s no template. So, liberate your mind and you’ll see the many opportunities around you as a journalist.

How has your recording changed since you got started?

Production needs have increased over time. We post more stories than before. This calls for a team, unlike before when I could do everything by myself.

How do you see vlogging evolving?

I think that styles will change in terms of editing and the structure of the video logs, but the core appeal is going to remain the same. I think viewers want to see people who genuinely look at the world in an original way. It’s fun to take a look at someone else’s life and see how they interpret it and deal with the consequences.

What opportunities have arisen from having a popular YouTube channel? Do you make any money from your videos?

Being able to inspire the world using my gifts and skills has been the greatest opportunity and source of fulfilment. I have seen people’s lives transformed. We’ve ignited conversations around issues that people have shied away from in the past. We have encouraged people to talk about their everyday struggles and triumphs without shame. Those are opportunities that money can’t buy. Production is a costly affair and I’m glad that the revenue we get is able to sustain the process.

How do you keep up with social media?

I’m intentional when it comes to my well-being. So, I take breaks and debrief often. I don’t allow the trends to overshadow my objective, which is to provide a safe space for my guests and inspire the world without losing myself in the process.

What makes a successful YouTube channel and what would you do differently if you were starting it today?

Growing your channel is all about creating videos viewers want to watch and sharing them with the audience. Every channel is unique and its growth is determined by different factors. But generally, one needs to know his or her audience, be consistent and pay attention to feedback. Above all, be patient. I’d not do it any different.

You’ve been nominated for this year’s YouTube Black Voices Fund class of 2022. Tell us about it and what it means to you as a content creator.

YouTube Black Voices Fund is an initiative by YouTube to directly support black creators and artists so that they can thrive on YouTube. Those who make it to the class are offered dedicated partner support, seed funding, and an opportunity to participate in an intensive development programme that focuses on training in production, community engagement and wellbeing, followed by ongoing workshops and networking programmes. I’m happy to be among the 26 African creators (four from Kenya) who made it to this year’s list.

What advice would you give to a YouTuber just getting started?

Consistency on when you post is important. Make videos about what you love. I think the most important thing I’ve learnt is to stay true to myself while at the same time adapting to what my audience responds to. Don’t just create content for the numbers but pick an area that you’re passionate about. That way, you’ll find a reason to keep doing it even when the numbers are not attractive. Eventually, the numbers will follow your content.

Atito: Meet ‘Classmates’ Actor and Umoja II MCA Aspirant Stephen Opondo < Previous
My Life in Crime: “I Stole a Bible That Changed my Life” Next >
Recommended stories you may like: