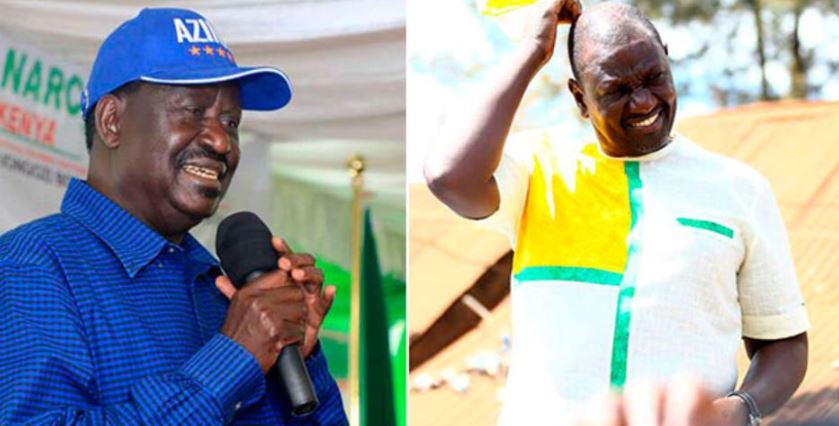 If elections were held today, Raila Odinga and Martha Karua would trounce William Ruto and Rigathi Gachagua to the presidency, a new poll shows.

Trends & Insights for Africa (TIFA) conducted the poll on May 17, one day after Odinga named Ms Karua as running mate, and two days after Ruto picked Gachagua.

The survey showed Ruto dropped to 35 percent from 39 percent recorded three weeks ago. It is also a drop from 38 percent in November 2021 and February 2022.

TIFA sampled 1,719 respondents from across the country, who were interviewed by phone.

For Wiper leader Kalonzo Musyoka, his popularity has remained largely unchanged at 2 percent, the same as his tally in February 2022 and November 2021.

According to the poll, 14 percent of those surveyed are undecided, 8 percent refused to respond to the question, while 1 percent said they would not vote.

According to #TifaElectionsBarometer Support for Ruto since TIFA’s last (late April) survey has declined in six of the nine zones, especially in his ‘home’ Central Rift and Nyanza (11% and 10%, respectively). Only in South Rift has he made a major gain (+26%). pic.twitter.com/87BqgYDUJk

For Raila Odinga, he has gained in seven of the nine zones TIFA uses for such purposes, the biggest in Coast, Nyanza and Western(13% in the first two and 12% in the latter). Only in South Rift has his support decreased (9%) #TifaElectionsBarometer

Everything Trending in Nairobi This Thursday < Previous
Auctioneers Fail in Bid To Raid Anerlisa Muigai’s Lavington Home Next >
Recommended stories you may like: