President Mwai Kibaki Has Died at 90 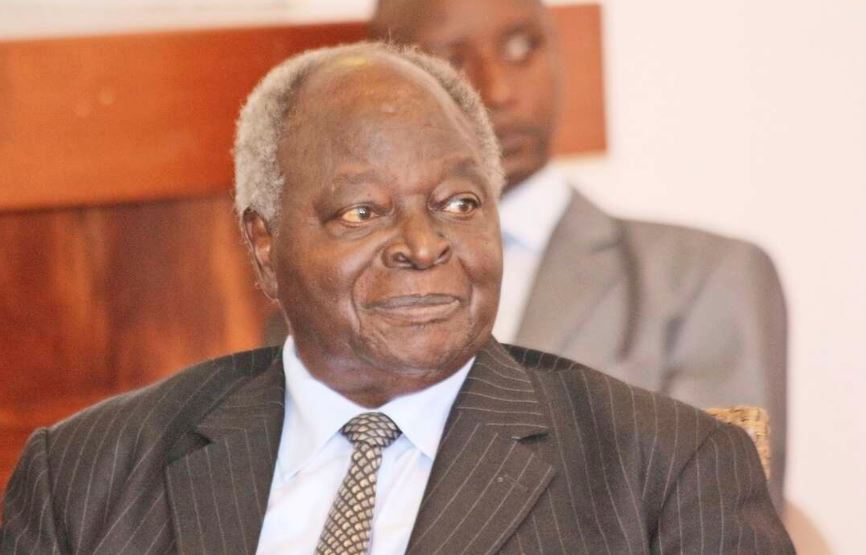 Kenya’s 3rd president Mwai Kibaki has died at the age of 90.

The announcement was made by President Uhuru Kenyatta on Friday. Uhuru lauded Kibaki as ‘a gentleman in Kenyan politics.’

Uhuru announced Kibaki’s passing at a press conference in State House some minutes past 12 noon.

Kibaki served as Kenya’s president from 2002 to 2013, presiding over a period of rapid economic growth, after 24 years of stalled growth under his predecessor. His legacy is still celebrated today, and future presidents will always be measured against it.

President Uhuru has declared a period of national mourning from today until when the late president is laid to rest. Flags will fly at half-mast. Further, the Deputy-President, Chief Justice, Cabinet Secretaries, Speaker of the National Assembly,  Speaker of the Senate, Kenya’s Diplomats abroad and anyone else authorized to fly the national flag on their cars shall not do so during this period.

By the time he left parliament in 2013, Kibaki was the longest serving MP, having served uninterrupted from 1963.

While the cause of death was not provided, Kibaki has been suffering declining health over many years, first after his 2002 road accident, and then due to old age. 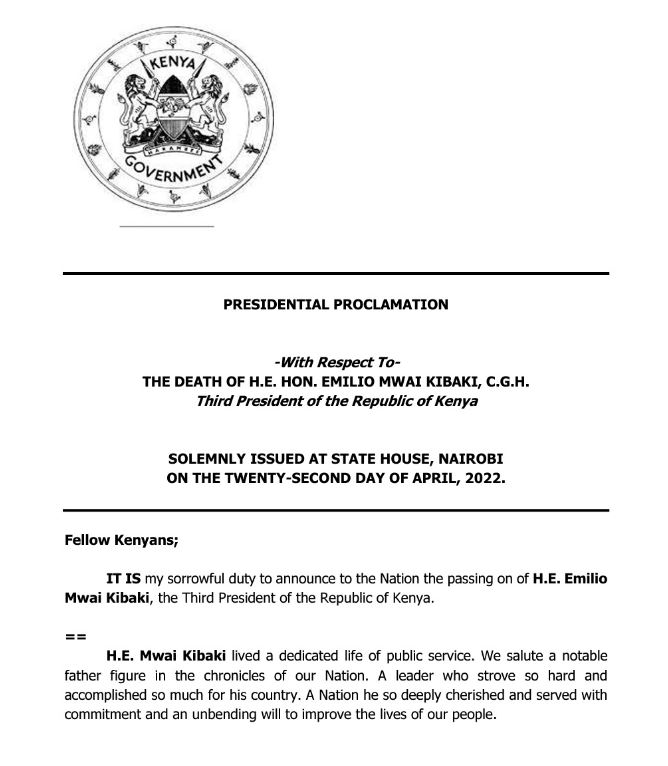 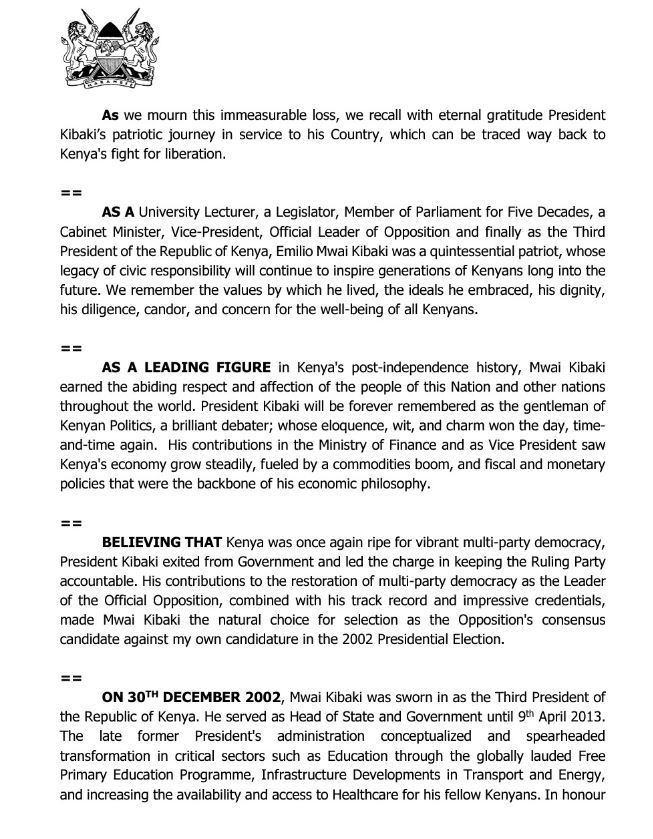 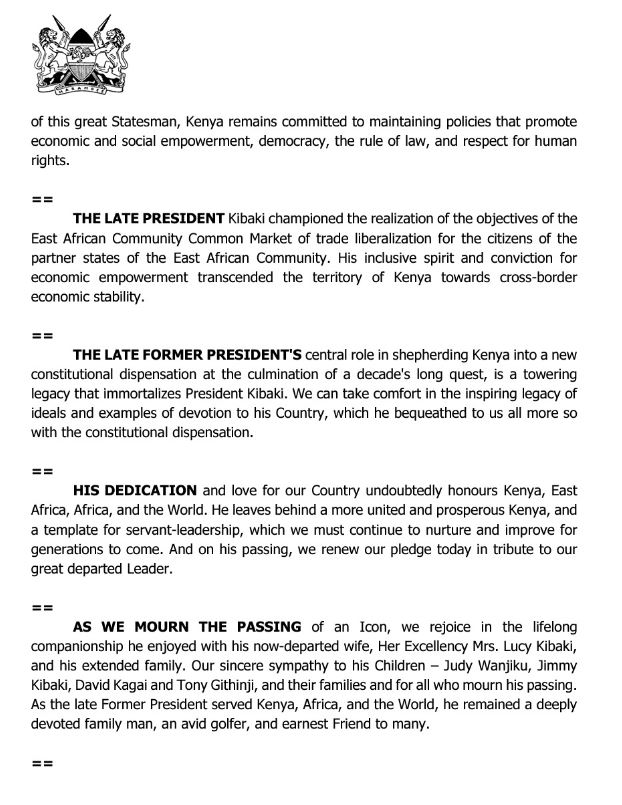 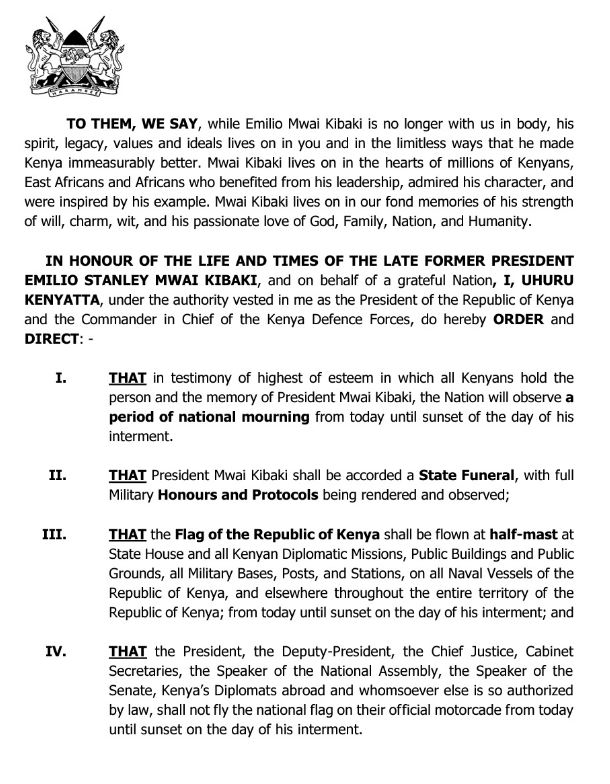 Here are some of the reactions from notable people on social media.

I join my fellow countrymen & women in celebrating the life of the 3rd President of our Republic.We thank you for everything you did for our Nation. Rest in Peace Your Excellency President Emilio Mwai Kibaki. May God comfort the family of our late President & the people of Kenya.

He has left a legacy that will stay with generations.

He has the best interest of Kenyans at heart.

My condolences to the family and friends of the Retired President Mwai Kibaki. He was a true leader, a game changer in politics and we will remember him for the great development he accomplished as a President.
Rest in peace. pic.twitter.com/xrTIGuFk8B

From Allah We Come. To Allah We Surely Return. RIP President Kibaki pic.twitter.com/Hzo5dBFMlX

Arguably the best President Kenya ever had. Cool, humorous, hardworking and focused. Pres. Mwai Kibaki will be remembered for initiating economic and infrastructural transformation and ensuring the completion of the constitution reforms process. Go well Kiongozi #RIPMzeeKibaki

President Kibaki was a GREAT President

Such excellent LEGACIES do not die..

Kibaki with no Airport or Park to his name lives on…

Kibaki with admirable Economic management to his name, LIVES on..

His legacy was not written on roads and buildings, but in our hearts!#Kenya

His Excellency the former President Mwai Kibaki has rested. He was a great visionary leader who spearheaded the economic recovery of this country. It was an honor to serve in his govt as an Ass Minister for Housing.

May GOD console his family, friends & the Nation. #RIPMzee pic.twitter.com/Aov9DblDF8

Tank you for everything, Mr. President. Kenya is grateful for your service, Hon. Mwai Kibaki.#RIP #RIPMwaiKibaki #Kenya pic.twitter.com/K0gBL3nkJj

The best that Kenya ever had. Rest in peace Mzee Mwai Kibaki pic.twitter.com/bxZnQnUrhd

Prisons Cleaner on Ksh20k Salary Spent Ksh257m Loot on Cars, Houses and Land < Previous
Pastor Tumaini: I Heard a Voice When I Was About to Hang Myself Next >
Recommended stories you may like: