President Uhuru Kenyatta on Thursday inspected the ongoing construction of the Shs 40 billion offshore Kipevu Oil Terminal, the largest of its kind in Africa.

The construction of the 770-meter long jetty, currently at 96% complete, is wholly funded by the Kenya Ports Authority (KPA) and implemented by China Communications Construction Company.

When complete in April this year, the offshore facility will be able to load and offload very large sea tankers of up to 200,000 DWT carrying all categories of petroleum products including crude oil, white oils and LPG.

Speaking during the inspection, President Kenyatta, who was accompanied by visiting Chinese Foreign Affairs Minister Mr Wang Yi, said the new jetty will enhance the supply and ensure price stability of petroleum products in Kenya and the region by replacing the 50-year old onshore Kipevu Oil Terminal (KOT).

When operational, President Kenyatta noted that the new offshore jetty will save the country in excess of Shs 2 billion annually in demurrage costs incurred by oil shippers thereby contributing to a significant reduction in fuel pump prices.

“Once complete the new facility will be able to reduce not only the cost of fuel but also to ensure that Kenya is able to consistently have an adequate supply of fuel for our needs and development needs that of our people.

“This terminal once commissioned in a few weeks time will result in the saving of almost Shs 2 billion that we are currently paying every year because of demurrage occasioned by the long queues of vessels parked outside our harbour waiting to discharge their product,” he said.

“Our partnership with China is not a partnership based on China telling us what to do. It is a partnership of friends, working together to meet Kenya’s socio-economic agenda.

“We needed this facility to be able to cater for those demands and China was there when we asked for partnership in developing it,” the President said.

He added: “They were there ready to work and walk with us hand-in-hand and that indeed is what we call a friend. We do not need lectures about what we need, we need partners to help us achieve what we require”.

On his way from inspecting the Kipevu Oil Terminal, President Kenyatta made a brief stopover at the Standard Gauge Railway (SGR) Container Terminal at the Port of Mombasa to assess the facility’s operations.

The Head of State said the various infrastructural projects implemented with the support of China had strengthened Kenya’s economy.

He noted that the Standard Gauge Railway (SGR) had kept the Kenyan economy ticking during the slowdown occasioned by the global Coronavirus pandemic.

The President noted that SGR had significantly lowered the cost of cargo freight saying the price of transporting a container of tea from Nairobi to Mombasa had reduced from Shs 60,000 by road to Shs 17,000 on the modern railway line.

“Many said there was no need to improve the railway linking Mombasa to Nairobi and ultimate to Kisumu, Malaba and our neighbouring countries. Today millions and millions of Kenyans have benefited through the reduction in cost of travel between Nairobi and Mombasa.

“During this Covid-19 period thousands of Kenyans were able to take advantage of the SGR to travel to Mombasa and to ensure that atleast our hotels down here were not closed and our people were kept in employment,” President Kenyatta said.

The photos are below. 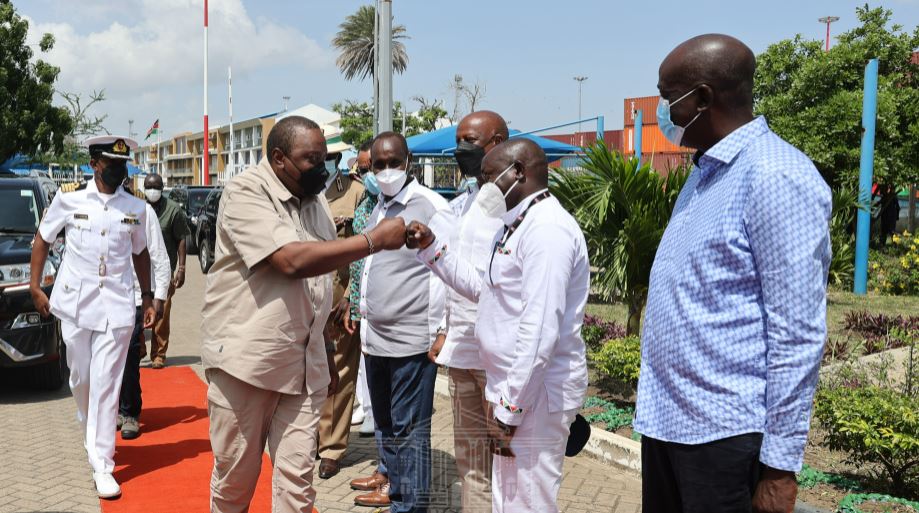 Prev1 of 17Next
Use your ← → (arrow) keys to browse
Mombasa Raha! Someone Bought a Blow J*b at Sonko’s Club and Netizens Can’t Cope < Previous
14 Things to Know About Twitter Influencer Msupa M aka Mollage Next >
Recommended stories you may like: