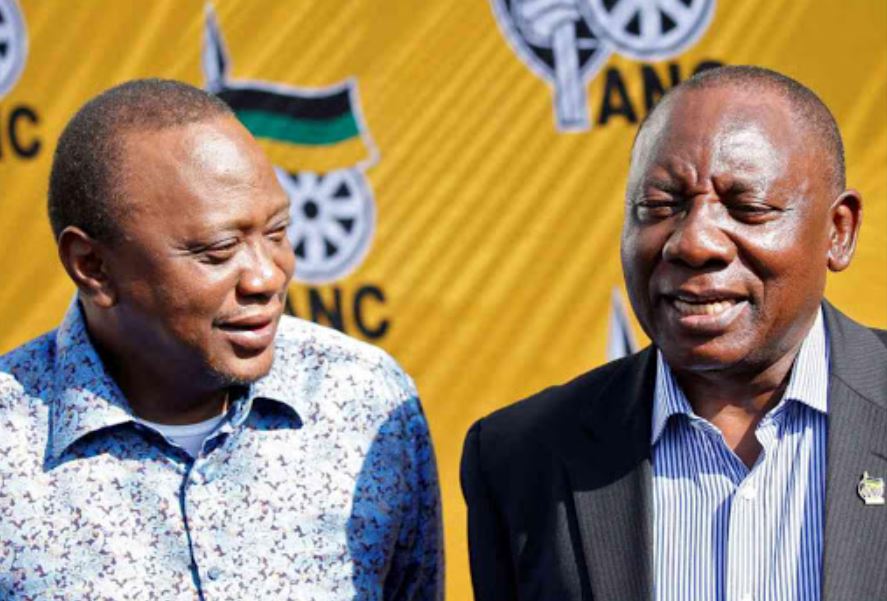 The President’s State Visit, at the invitation of his host President Cyril Ramaphosa, is geared towards deepening the existing mutually beneficial ties between Kenya and South Africa.

On Tuesday, November 23, President Kenyatta will be hosted at a formal welcome ceremony by President Ramaphosa at the Union Buildings in Pretoria, the official seat of the South African Government.

Briefing the press in her office in Pretoria ahead of President Kenyatta’s arrival, Ambassador Catherine Muigai Mwangi said the highlight of the visit will be a bilateral meeting at the Union Buildings where some memoranda of understanding (MOUs) will be signed to anchor the engagement of the two countries in a number of areas.

“It is indeed an exciting visit for both Kenya and South Africa. We have an excellent programme for His Excellency, the President.

“Of course the highlight of the visit will be his meeting with the President of South Africa, His Excellency President Ramaphosa, at a bilateral meeting which will be attended by both principals and their delegations,” Amb Mwangi said.

Amb Mwangi pointed out that MOUs on migration matters, tourism and diplomatic consultations are some of the key diplomatic instruments that are expected to be signed at the Tuesday high-level bilateral meeting.

“The MOUs form the framework within which Kenya and South Africa will work together in some of these areas,” the Kenyan High Commissioner to South Africa said.

Amb Mwangi explained that the MOU on migration will be a precursor to establishing a visa-free regime for Kenyans travelling to South Africa, adding that this is a reciprocal move because South Africans already enter Kenya without visas.

On the MOU on tourism, Amb Mwangi said the agreement will look at all elements of tourism including opportunities for investment to grow the sector in the two countries as well as providing a platform to exchange experiences and lessons learnt.

“Because tourism is such an important sector for Kenya, it is essential that we look at every opportunity to increase tourist numbers and improve on our products,” she said.

Besides the bilateral meeting, President Kenyatta and his host will also preside over a joint Kenya-South Africa Business Forum to further explore new areas of economic, trade and investment cooperation.

“This is a big opportunity because trade and trade-related matters as well as investment are of great importance to both countries. This is an area that we are looking forward to strengthening, deepening and indeed cementing,” Amb Mwangi said.

President Kenyatta’s programme in South Africa also includes a visit to the Aspen Pharmacare, the South African-based subsidiary of Aspen, a global multinational pharmaceutical company that manufactures and distributes the Johnson and Johnson Covid-19 vaccines.

The strategic partnership between the two nations is underpinned by common values and principles.

Both nations are committed to democracy, good governance and respect for human rights including the emancipation of women and the full realisation of gender equality.

South Africa established diplomatic relations with Kenya in 1992, with a Joint Commission for Cooperation Agreement enabling the highest form of bilateral engagements conducted at the Ministerial level.

Another Petition Filed to Remove DPP Haji From Office < Previous
The Trending Pics and Tweets This Tuesday Next >
Recommended stories you may like: