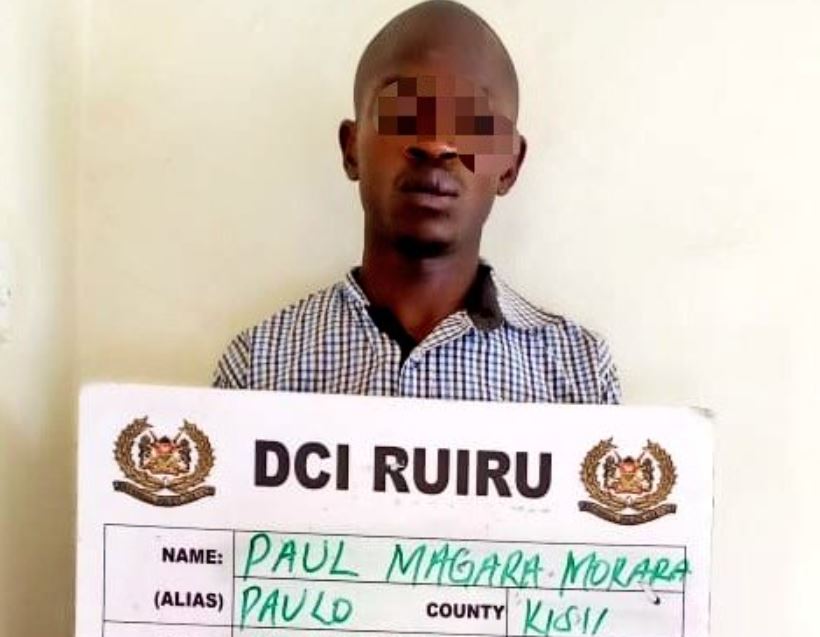 Detectives in Ruiru have finally arrested a serial rapist and killer who has been on their wanted list since 2020.

Paul Magara Morara, 29, who was only known as ‘Mkisii’ before his arrest, has reportedly been terrorising residents of Ruiru in Kiambu county.

According to DCI Ruiru profiling, the masked Magara occasionally struck ladies in the hours of darkness, killing and seriously injuring some before escaping with their panties.

The suspect is believed to be behind a shocking incident in 2020 at Kiunguru area around Ruiru Bypass when a woman was found dead in her room, with one of her breasts chopped off.

Detectives pursued the anonymous perpetrator for months but in vain.

Then in January 2021, Magara is said to have been seen with a woman who was later found murdered at a local lodging in a similar style.

After months of receiving several attempted murder incidents all reported by female victims, another lady was found murdered in her rental house at Magorofani area of Wataalam.

“The mysterious agent of death had caused untold panic and terror in the area, with word having it that a vampire was roaming in the dark hunting down women,” the DCI said in a statement. 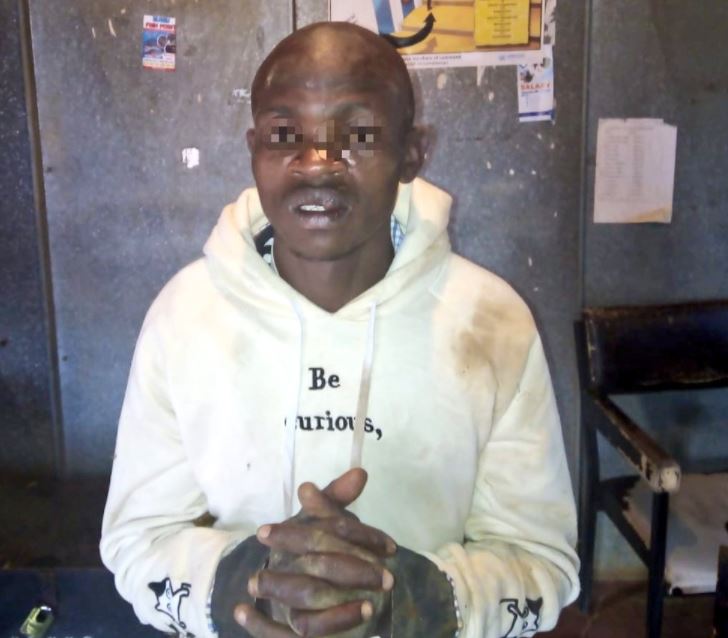 The Ruiru ‘vampire’ is said to have been back in the action for the last four months during which time he killed three women and seriously injured four.

Paul Magara Morara reportedly struck again on September 7, by breaking into the house of two sisters aged 18 and 19, where he stabbed and left them for the dead.

One of them is still admitted at Kenyatta National Hospital’s Intensive Care Unit.

Magara was back at it again on Wednesday, October 13, breaking into the house of a couple when they were dead asleep at Wataalam village in Ruiru.

According to reports, Magara used a master key to access the couple’s single-roomed house and attacked 21-year-old Grace Gitonga at around 3 AM.

Ms Gitonga said the masked criminal brandished a knife and stabbed her after she refused to surrender her suckling baby to him.

As this was happening, Gitonga’s husband Collins Otieno was dead asleep and only woke up after the wife started screaming.

“The man was fully covered on the head and was unrecognisable since it was still dark,” Gitonga said.

Otieno, who thought the wife was dreaming, woke up to find Gitonga profusely bleeding before the criminal left the house. She had been stabbed in the neck.

He rushed her to Ruiru District Hospital where she was treated and discharged.

Believing that the attacker was still around Wataalam at that early hour, police in Ruiru launched a thorough comb of the area, and nabbed four suspects.

They also recovered a mobile phone that belonged to one of the sisters that were attacked on September 7.

“Hours of interrogations on the four revealed that one of them, 25-year-old Moses Moogi Okemwa was an accomplice of the prime suspect, who jointly executed some of the attacks,” said DCI. 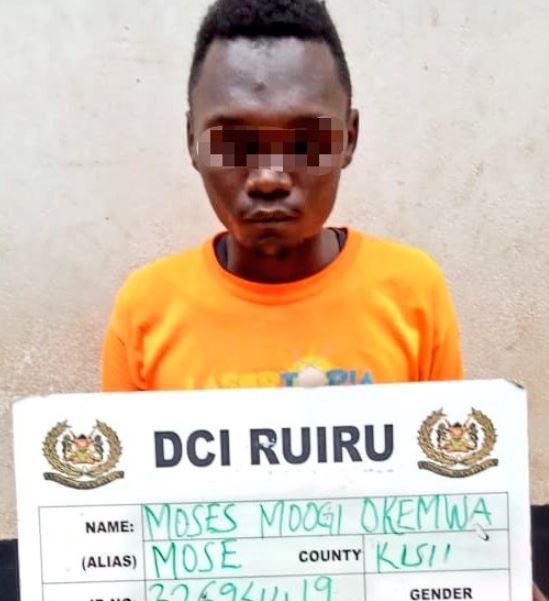 At the crack of dawn Thursday, Ruiru detectives who had camped metres from the house of Magara’s brother ambushed the prime suspect as he headed to have breakfast at his kin’s place.

“As early as 6 am, the dusty 29-year-old had a backpack containing a hammer, 7 female panties, and an electrical bulb holder,” added the detectives.

Further investigations revealed that Magara joined a cult back in 2013, which promised to be paying him for every woman he killed.

“Strangely, showing a woman’s pants would confirm that he indeed deserved a pay. He had however been double-crossed after a Sh30,000 down-payment, but continued with the monstrous attacks,” the DCI concluded.

Raila’s Message to Doubters of his Sh6k Monthly Pledge for Poor Kenyans < Previous
Woman Locked Inside Pepino’s Pizza’s Washroom on Kimathi Street After Curfew Next >
Recommended stories you may like: