Billboards Launched to Show Quality of Air in Nairobi 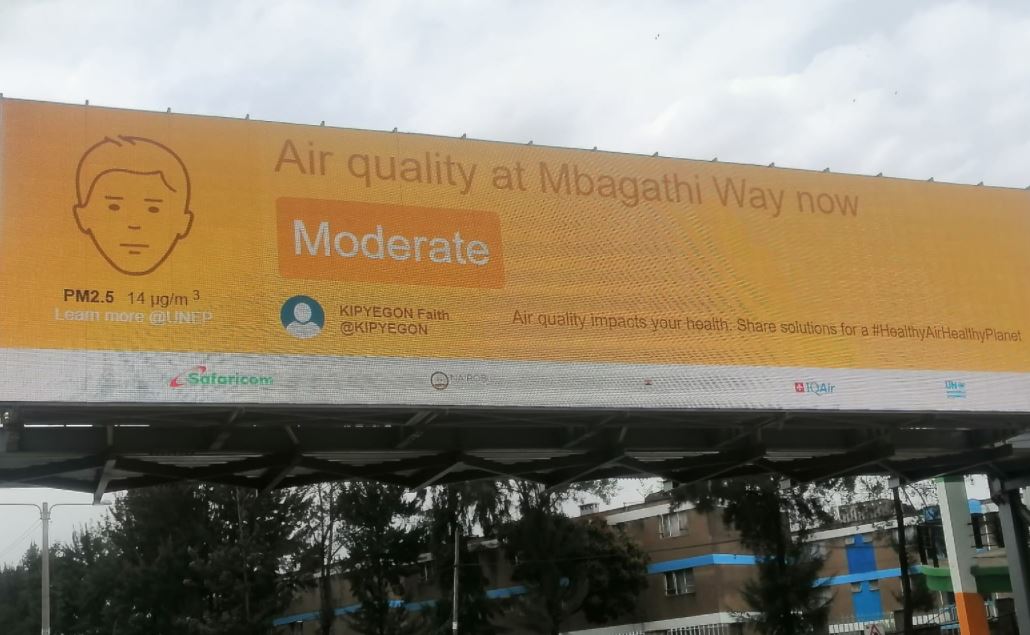 Nairobi city dwellers will now be able to know in real-time the quality of the air they are breathing following the launch of digital billboards.

The four billboards were installed across the city and began live-streaming on Wednesday, September 8.

“Real time air quality monitoring will help us with the issuance of health advisories as well as formulation of smart traffic controls that minimize congestion,” said Lawrence Mwangi, Assistant Director of Environment (pollution control) at the Nairobi County government.

According to Mwangi, the advisories will “help people limit their exposure to harmful pollutants” considering most residents do not have access to real-time air quality data and consequently, are often unaware of the harmful levels they breathe.

“Action on air pollution, which is responsible for millions of premature deaths a year, is critical – efforts should focus on high-risk communities, such as people living in informal urban settlements,” said Inger Andersen, Executive Director of UNEP.

“Some of the world’s most vulnerable communities are disproportionately affected by poor air quality,” said IQAir CEO Frank Hammes.  “The real-time visibility of the impact of air pollution can help governments and communities take actions that lead to cleaner, healthier air.”

Peter Ndegwa, CEO, Safaricom says the company will use “our digital platforms and expansive network infrastructure to support the air quality monitoring project to expand across more urban areas in Kenya”.

The project comes as the world celebrated the second International Day for Clean Air and blue skies on September 7 under the theme, Healthy Air, Healthy Planet.

Nick Ruto Responds to Gay Rumours After Birthday Party Video Goes Viral < Previous
This is What’s Trending This Tuesday Next >
Recommended stories you may like: