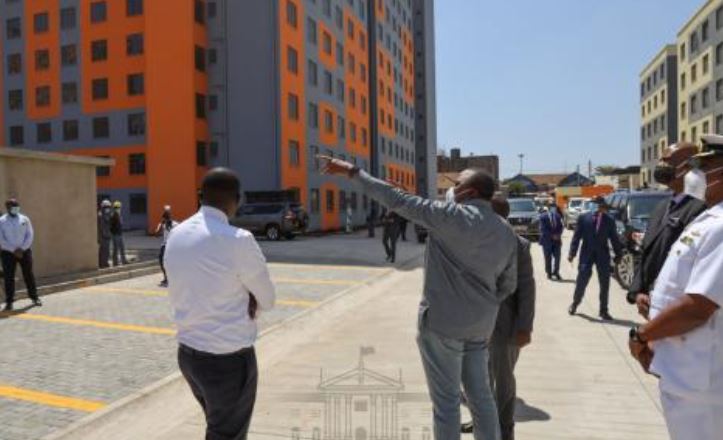 The govt expects to handover the first block of 160 units in Pangani, Nairobi in February 2021, nine months after the president commissioned the project.

“The original 48 tenants of the Old Pangani Estate will be part of the group that will take ownership of the new units,” said Kerich.

The first 48 owners were evicted in June 2019 and given Sh600,000 to facilitate their rent in areas of their own choice. Each will be required to pay a minimum of Sh8,000 per month (depending on size) for 30 years to fully own the unit occupied.

“So far, the foundation for blocks two, three, four and five is complete,” Kerich said. The same is the case for the foundation of blocks six, seven, and eight.

The eight blocks will have 1,562 apartments standing on 5.2 acres. The units will comprise 128 one-bedroom, 248 two-bedroom, and 576 three-bedroom houses.

About 610 three-bedroom units will be available at market rates. Sixty percent of the affordable units will cost between Sh1 million and Sh3 million.

Prospective tenants can register for the affordable housing scheme for free via Boma Yangu online platform. A lottery will then be used to pick the new house owners as each project is completed.

The Pangani Affordable Housing Project is expected to be completed in December 2021.

Martha Karua Awarded Sh2.8 Million Over Election Petition Against Waiguru < Previous
The Trending Pics This Wednesday Next >
Recommended stories you may like: