My Hustle – How I Run Mixed Livestock Farm 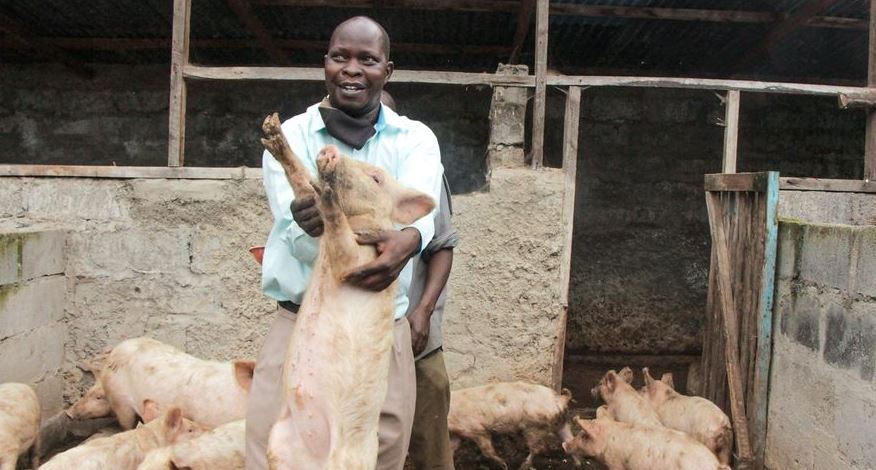 Maurice Mugo is a mixed livestock farmer who keeps pigs, chickens, sheep, and goats in Lanet, Nakuru. He spoke to Seeds of Gold about how he has made the venture a success.

Yours is a mixed livestock farm, what exactly do you keep?

Many forces are against a farmer, from the weather, market prices and diseases, thus diversification is necessary.

You have been farming for about 15 years, what has been the experience?

I began my farming journey soon after graduating from Kenyatta University with a Bachelor of Education (Arts) degree.

I used my Sh16,000 savings to acquire four pigs each at Sh4,000 after noticing demand for pork was high in my area.

But before starting to keep the animals, a local farmer taught me how to feed the animals, carrying out market research and controlling diseases and pests.

I built a four-by-six-metre structure to host the four pigs, and since 2015, I have been averaging 100 pigs.

How do you take care of the pigs?

I keep my Landrace and Large white pigs according to their stages of development namely piglets, growers and pregnant mothers.

I now have 25 cubicles, which normally host an average of four pigs each. The pigsty floors are cemented, while the sleeping areas are bedded, and the structures have a good drainage system.

Proper hygiene and feeding are key in good pig farming. I feed the animals cabbages from my farm, crushed maize cobs and commercial feeds, including weaners and finishers.

Good diet helps the animals gain weight in a short period. It takes between 16 and 18 weeks for the pigs to be fully mature and can weigh up to 117 kilos. The pigs also need plenty of water and must be dewormed.

Experts warn against mixed livestock farming since some animals share pest and diseases, what can be disastrous. How do prevent such challenges?

Roundworms are the most common parasites that affect pigs. This may affect chickens as well or fleas may be shed off from the body of the pigs or goats.

I have completely separated the flocks.  I have built a perimeter wall to separate the animals and avoid having the birds – which free-range – from coming into contact with the pigs.

Hygiene is also key. I have employed four youths who ensure the pens are clean and take care of the animals while I am away since I own  St Monica Secondary School in Lanet, where I also teach Georgraphy and Agriculture.

My love for birds drove me to rear guinea fowls and chickens, which I sell each at Sh2,500 and Sh800 respectively.

Mixed farming is generally pocket-friendly, as soil fertility is maintained at all times, whereby the supply of nutrients is kept constant by recycling soil nutrients.

Where do you sell the pigs?

Most of the buyers are owners of restaurants, hotels, pork shops and farmers seeking to keep them. They come from Nakuru, Naivasha, Limuru and Nyandarua.

What precautions should one take with mixed livestock farming?

Jeffrey Musau, a veterinary extension officer in Makueni: Unless the farmer is careless, there is no harm in raising farm animals alongside birds such as chickens on the same farm.

Before adding other farm animals such as sheep, goat and cows, ensure there is proper zoning and you have capabilities of housing them. Birds such as chickens and guinea fowls add stability to the farm.

Chickens get along with most herbivores, except the pigs, which are omnivores. Pigs may at times injure or eat your chickens and that’s why zoning is significant.

“With diseases, the risk arises when the farmer crowds the animals affected by similar diseases at the same place.”

Passion Seedlings Prove Fruitful Business Venture For Job Hunters < Previous
In Conversation With Evelyn Wanjiru Next >
Recommended stories you may like: