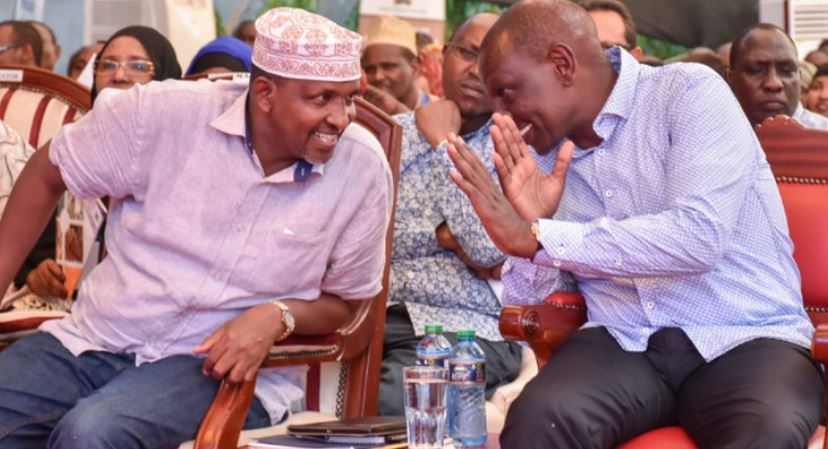 Deputy President William Ruto was among the first leaders to console Garissa Township MP Aden Duale after he was ousted as the National Assembly Majority Leader on Monday.

Ruto praised Duale for his passionate service and further assured him of a chapter when parliamentary history is written.

“My brother Aden Duale, you are a great leader. For the last 8 years, you discharged your responsibilities as our party’s 1st majority leader with style, precision, passion and loyalty,” the DP tweeted.

“My friend, when parliamentary history is written you will have a chapter. Mbele iko sawa na Mungu,” he added.

During the Jubilee PG meeting held on Monday at the KICC, Duale was removed from his powerful position in Parliament and replaced by Kipipiri MP Amos Kimunya.

Duale spoke shortly after saying he leaves the coveted seat with his head held high.

“I came, I saw and I conquered. Today marks the end of my seven years of service to the great people of Kenya as the Leader of Majority of the National Assembly. I was the first occupant of the seat under article 108 of the Constitution,” he said in a tweet.

“I am particularly proud that during my service, I was also able to ensure that all the Bills for implementation of the Constitution, financial legislation to implement devolution and provide services to the people of Kenya and Bills to implement the Big Four Agenda were enacted.

“I equally thank the Deputy President, the entire Jubilee members of Parliament and my family for their support during this period,” he added.

“But like I have said before, public positions are not to be personalized. When you are given a position you do your best and when the time comes for you to leave, you leave with a smile.”

Duale at the same time congratulated his successor.

“I am glad that today, I leave with a smile, being proud of what I was able to achieve. Finally, to my brother Hon. Kimunya, permit me to congratulate you for your new appointment,” he said.

The Trending Pics and Memes in Nairobi Today < Previous
Butere Teenager Beats Younger Brother to Death Over Maize Next >
Recommended stories you may like: