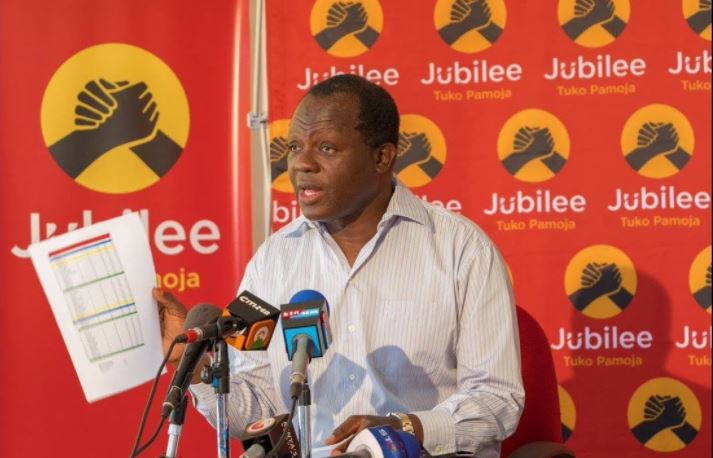 Kenya’s political history since 2002 has shown that the ruling party’s’ lifetime is short as they disintegrate upon the end of tenure of the sitting president. Going by that, and the current turmoil in Jubilee Party, where do you see Jubilee come 2022? What is your promise and advice to potential candidates for various seats on Jubilee party come 2022? Bernard Chetambe Lipesa, Nairobi

The ideals that informed the formation of the Jubilee Party remain true today as they were in 2016. We have witnessed such moments in the past like in 2002 and in 1963 when many in the country dreamed that the time had come to make the transition from the ethnic driven politics and into an era of issue driven politics. We have failed and succeeded in varying degrees. I cannot blame those of us who have dreamed and failed. I personally would rather dream and work towards making those dreams come true than to simply give up.

As to what may happen in 2022, all I can say is that I cannot even tell what is likely to happen next week.

From its founding, Jubilee Party has sought to associate itself with the Communist Party of China including inviting the Chinese party officials to Jubilee events pre-2017 General Election. Even the Jubilee Party campaign merchandise came from China. Do you think the Chinese Communist Party’s model of running party affairs can work in Kenya where there are many parties to choose from and one’s belonging to a party is not based on any ideology? Maurice Mudeheri

The Chinese Communist Party is the biggest political party in the whole world. Its grassroots organisation is second to none. Jubilee Party can only aspire, and where possible learn some lessons. It is unlikely that in our lifetime, Jubilee Party can get anywhere close to the organisational levels of the Communist Party of China. In any case the cultural contexts are very different. But once again what is wrong from learning from the most successful and the best run?

Your party has subjected nominated senators Naomi Waqo, Victor Prengei, Falhada Iman, Mary Seneta and Millicent Omanga to disciplinary measures. Why didn’t you do the same to Kipchumba Murkomen, Susan Kihika and Kindiki Kithure before subjecting them to the kind of humiliations they received by being removed from their Senate offices? Michael Ngunjiri, Mukurweini Nyeri

The act of campaigning for another party where the two party leaders have entered into an era of some collaboration cannot be compared to the gross insubordination where a Senator fails to turn up for a meeting convened by the party leader. More so when there is suspicion that they were not acting in good faith because they may have been lobbied not to attend.

Sir, would you from the bottom of your heart tell Kenyans that things are quite okay in Jubilee Party and that all members are comfortable and satisfied with what is going on? Do you believe the party is imploding slowly and that it is no longer the dynamic party that has won Presidential elections in Kenya two times with a huge following? David M. Kigo, Nairobi

It would be dishonest to say from the bottom of my heart that everything is okay in Jubilee Party, that all members are comfortable with what is going on. If you find such a party within our borders where everything is fine, please show me because I would like to join such a perfect organisation. In short, we have our challenges and shortcomings. But there is nothing we cannot work on and correct.

Among the youth there are genuine concern that Jubilee used them to get to power but has now side-lined them in favour of the old guard. What are you doing to ensure inclusion and that the government reserves a percentage of all appointments, including the positions of principal secretaries and heads of departments, for qualified youths with the capacity and passion to serve our country?  Raphael Obonyo, Nairobi

We are generally a young nation. More than 70 per cent of our population is below 35 years. So being youth alone is not a sufficient criteria to qualify for a job like a consultant surgeon or PS. I am probably being too simplistic here. But I need to stretch it here so that we all acknowledge that addressing the youth population bulge as we have in our country today is not just about denying the older population food so that the younger population may eat. We need short, medium and long term strategies and programmes that can address the problems in holistic and sustainable ways. Fortunately this is not rocket science. Other countries faced by similar challenges have successfully dealt with the problems. Denying older people the opportunity to make a living has never been in the toolkit for success.

With everything thrown into disarray by Covid-19, when are Jubilee Party delegates expected to meet to elect new party leaders?  Githuku Mungai, Nairobi

What is the correct position regarding Mr David Murathe? He announced that he had resigned as Jubilee vice-chairman but after almost a year of silence he says he is going nowhere. Please clarify.  Githuku Mungai, Nairobi

There has been expressed a desire to have at least two or three strong, policy and ideology driven political parties in Kenya as is the case in the United Kingdom, United States, France and South Africa. The reasoning is that this will entrench issue-based politics that will translate into good governance in our country devoid of tribalism, hatred and bloodshed every election cycle.

What is your take in this matter given the fact Jubilee was formed to unite all Kenyans by collapsing 12 tribal and regional parties into one party?  Dan Murugu, Nakuru

Actually the countries you have mentioned all have many parties. What has happened over the years as the democracies have matured is that some of the parties have died, others have emerged while others remain moribund and that is why you may not have heard about them outside those countries. It takes time to build parties. We may have to be patient before we witness non-tribal, issue-based parties. What is ironical is that many of the purely ethnic based parties are the first to argue that they are issue-based.

CRAZY: Funny Pics/Memes Going Viral on Kenyan Social Media < Previous
All The Trending Images This Monday Next >
Recommended stories you may like: