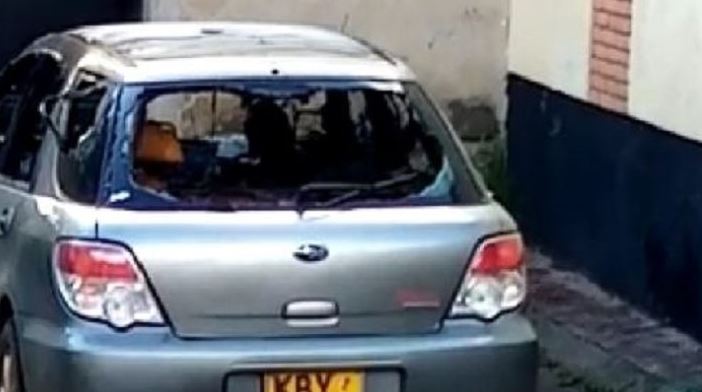 Investigations are ongoing into the mysterious death of a man whose car burst into flames on Wednesday morning in Nairobi’s Buruburu Estate.

Terance Korir, 36, was burnt beyond recognition outside his home in Buruburu Phase V, Maimahiu Court, with the cause of the fire yet to be established.

Witnesses said the car, a Subaru Impreza, exploded after the man ignited the engine as he was heading to work at around 8.30 am.

Cyrus Chege, the Chairman of Mai Mahiu Court, Katulo Road, said he was alerted by security guards that there was a car on fire at the parking yard.

Neighbours tried to put out the fire but their efforts were in vain. It took the intervention of Nairobi County firefighters to contain the inferno.

Buruburu police boss Adamson Bungei said that while investigations are ongoing, it was strange that only the car’s interior was destroyed by the fire.

“When he ignited the vehicle’s engine, the car burst into flames at the bonnet section. The cause of the fire is yet to be known. It is strange how the vehicle’s interior was the only part that was destroyed by the explosion.

“The engine and rear part of the car is intact and the fire concentrated inside. We don’t know what happened but experts are on the case for now,” said Bungei.

The OCPD also noted that witness accounts indicated that there was an explosion right before the car caught on fire.

“We have since towed the damaged car to Buruburu Police Station for analysis,” said Bungei.

Korir who worked at a bank in Nairobi is survived by his 29-year-old wife and two children.

Phyllis Ngirita Dealt Blow as Court Dismisses Bid to Withdraw Sh700,000 from KCB Account < Previous
The Trending Pics This Labour Weekend Next >
Recommended stories you may like: