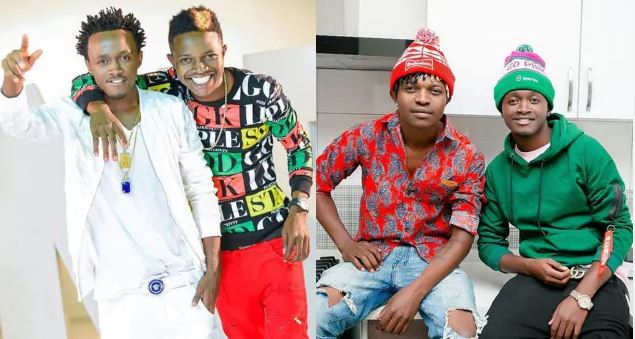 The rivalry between former best friends Bahati and Mr Seed has been revived following the former’s remarks about their fallout.

In a television interview, Bahati called out his two former signees, Mr Seed and David Wonder, for alleging that the EMB founder owes them Sh6 million.

Bahati said the two gospel singers fabricated stories in order to trend, but “time will tell”. “Sijawahi ongea hii kitu somewhere else but nadai hawa vijana more than Sh6 million. That’s why they created a story to trend, but time will tell. Where are they?” posed Bahati.

In response, Mr Seed blasted Bahati on Instagram accusing him of spreading lies.

“Bahati is so contemptuous, why is he referring to us as ‘those boys’? He thinks we became useless after we left EMB,” said Mr Seed.

He wrote, “I have achieved so much in three months I give God all the glory. But my brother, I love you and because of the love I have for you I forgave you for everything you did to me and my family .. but I wonder why you should go n lie live on national TV?? Anyways God bless you for everything no hard feelings though.”

Mr Seed further said, “If I owe him money let him report to the authorities rather than spreading lies all over TV stations.

“I have been silent and moving on well and I just wonder why he has revived the beef,” he said as quoted by Word Is.

The young father of one maintained he is not in the music industry to trend but to minister to people.

“If he still wants to trend, let him do, but he should not use my name,” Mr Seed said, urging Bahati to “focus on doing music like I am doing”.

The Top Stories on the Internet Today (Tuesday June 11) < Previous
AFCON 2019: Michael Olunga Looking to ‘Make Kenyans Proud’ in Egypt Next >
Recommended stories you may like: