Tanasha Rules Out Joining Wasafi Unless Diamond Does One Thing 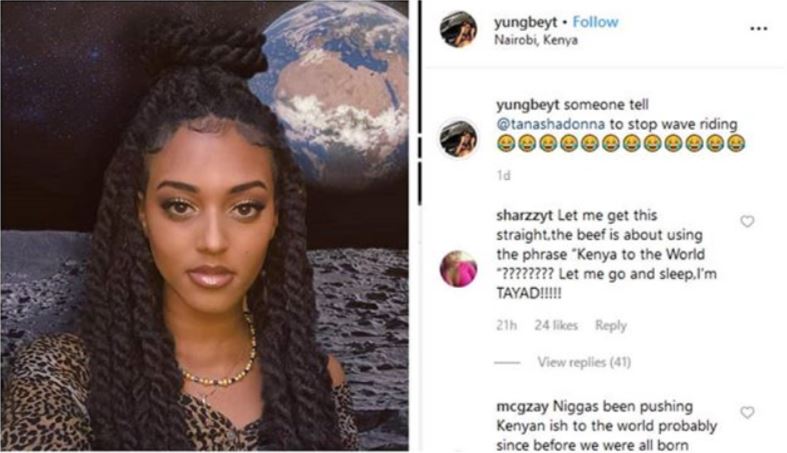 The Kenyan model who doubles as a radio presenter at NRG radio has been doing well since she released her debut track ‘Radio less than two weeks ago. The track which features Kenyan-US rapper Barak Jacuzzi is almost hitting 1 million views and Tanasha says the Wasafi crew approved it.

“They are fully supportive and I make sure I go through everything with them as well so that they confirm if it is good or not. I appreciate their honesty,” Tanasha said.

And as she prepares to shoot the video for her second track, Tanasha has ruled out joining her bae and his crew.

According to Tanasha, Wasafi’s style, which is predominantly Bongo, is different from hers.

She, however, revealed that she would consider joining Wasafi is Diamond did one thing.

“I think that the type of genre that I do compared to Wasafi is totally different. Unless he (Diamond) starts like a Wasafi Caribbean/Hip-hop type thing maybe, but as for now not really,” said Tanasha on Switch TV.

Tanasha is set to release her follow up single in about one month’s time. It will be part of an E.P she is working on

“I’m currently working on an EP, I don´t have a specific date yet, but I´m looking towards, honestly, realistically speaking, towards October, end of this year. But then I will be releasing my second song in about a month or so. I´m actually shooting the video in the next 2 weeks. Look out for that, it´s gonna be lit!” she said.

? HOLD UP SHE'S BACK THIS TIME… SHE'S BACK WITH A GAME PLAN…. ? #NAHEASY DROPPING SOON….AS FOR NOW KEEP STREAMING RADIO LINK ON BIO. Art: @justelsie_artpage

Jimmy Gait Claims He’s Being Stalked by Twin Sisters Who Want to Marry Him < Previous
Hamisa Mobetto Defends Diamond Against Zari’s ‘Deadbeat Dad’ Allegations Next >
Recommended stories you may like: