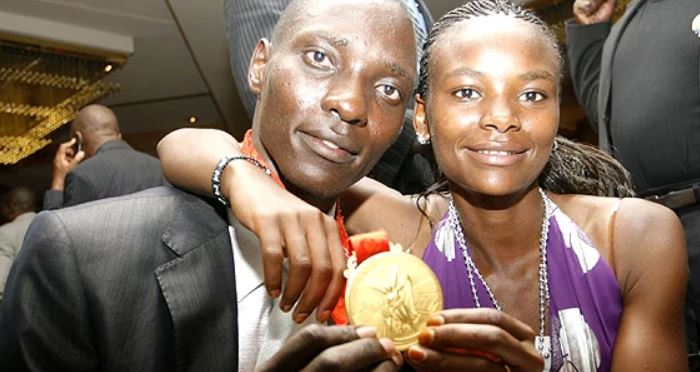 The athlete’s marriage hit rock bottom after he released a damning video – showing him canoodling with his friend’s wife in a car.

Kiprop now wants forgiveness from his wife, Sammary Cherotich, for the illicit affair with Nancy Rotich that had been going on for two years.

Speaking during a recent interview with Nick Mudimba on Switch TV, Kiprop explained that he leaked the video after learning that Nancy was cheating on her with other men.

He said that releasing the video was his way of coming out clean to his wife and the public.

According to the 29-year-old athlete, his wife of six years walked out of their matrimonial home in Eldoret after the video and has not returned since.

“At the moment the woman is in good terms with the husband but I have a problem because my wife has run away but I want to bring her back. I told her that I was confessing to something that she didn’t know for two years,” said Kiprop.

In the interview, he revealed details of how the woman used to lure him to sneak out of training camp to spend time with her. Apparently, the steamy affair and frequent distractions resulted in a dip in his form on the track.

“She was also cheating on me I am sorry to say, so (by shooting the video) I was confessing to the man (my best friend) and the society of my wrongdoings.” Kiprop.

“The bible says confess your sins so you shall be forgiven. I saw the tribulations that I was undergoing and I thought maybe there is a sin that I committed. I remember in 2015 I had a very good season (on the track).”

Woman Sentenced for Defiling Minor and Infecting him with Syphilis < Previous
Woman in Court for Dumping 3-Week-Old Baby in Pit latrine Next >
Recommended stories you may like: