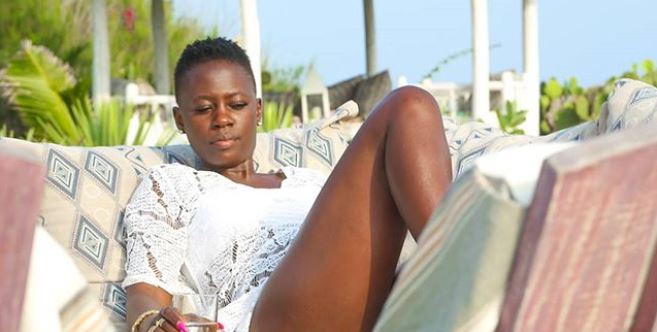 Esther Akoth alias Akothee has opened up about her rollercoaster of a life in great detail and revealed little-known facts about her.

In an interview with Sunday Standard, Akothee revealed that one of her most defining moments was two years ago in a hospital bed in Geneva. She had just had a miscarriage and was distraught.

“I got more than 10 messages saying they wished I would also die in that bed. That I had faked a pregnancy. I have five children, so clearly I am not infertile. I am a moving scandal, so why would I try to create a scandal like that one? That is when I decided that if people did not care, then I do not care either for their opinions,” she said.

The ‘Lotto’ singer further talked about her childhood, getting pregnant at the tender age of 14, a son who died because she could not afford to take him to a hospital, and much more.

Here are the excerpts:

Let‘s start with an easy one. Who do you look up to?

Myself.  I am my number one fan. Oh….and Tina Turner. I used to perform her song ‘Simply the Best’ at karaokes when I started out. Now she is my neighbour in Zurich. We met once in a club. We have similar backgrounds. I think she cleaned houses for a living before she made it in music.

So, you own a house in Switzerland? What else do you own?
Yes, in Zurich. I own another in Lugano, a city in southern Switzerland, another in France, my ‘White House’ in Mombasa and Rongospar, what will be my retirement home in Rongo. I also have a stake in the horticulture sector and I am a farmer. I have 40,000 Eucalyptus Grandis that are ready for harvest as we speak. I am also putting up the Rongo Spa Hotel, which is my retirement plan.

Sounds like a full schedule. What does your day to day life entail?

Well, let’s see. I have concerts to prepare for, I maintain five homes in different countries and a number of businesses. I am a mother of five. I have to make time for my relationship. I am learning Italian because most of my clients are Italian and I also have to engage my fans on social media. You could say that I have a full life. Oh, I also direct and edit my own music videos. I just need somebody behind the camera and I can do the rest.  I know how I want it to look in the end, so I do it myself.

Some say that you are arrogant… and a man hater…

Men think I hate them but I do not.  We cannot do without men, but women should also learn how to say NO. I cannot let any man make plans for me and if they try to I will be out of there so fast they will be dizzy. I am in a relationship, but I will not discuss it.

I come from a polygamous family. My father had two wives and 21 children. Growing up, my family was well-known. My father then was an administrator for the government while my mother was a teacher. I went to school in Turkana and West Pokot, where my father was based. I went to boarding school from the age of seven. But my first child came when I was still very young.

I was 14 and in Form 2. My parents were very angry but I decided to drop out and become a wife to the love of my life and raise my child. I lived with my mother-in-law and I would work in her house in exchange of food and accommodation.

How did that work out?

Well, I had two more children by the time I was 16. Unfortunately, the second child contracted pneumonia and died because I could not afford to take him to the hospital.

I am so sorry about that. How did the marriage fare?

Not too well. The ‘love of my life’ kicked me out. The husband I had sacrificed everything for. He got a job and fell in love with another woman and kicked me out. That was when I realised I had no one; that no one would be there for me, not even my husband. I was a church choir member and I thought I had a home and friends there. I wrong. The minute they realised I had been kicked out, everyone disappeared.

Still go to Church after that?

I realised that the church was full of hypocrites. So I got out, became a dancer and a party animal. Not that I dropped my faith…No. I am a staunch Christian but I do not accommodate hypocrites.

How did you pick up the pieces?

I do not give myself even one second to feel sorry for myself. As a woman, I realised that I had no choice other than to be strong. I was responsible for the four children I had brought into the world, so it was do or die for me. And I got a job as a matatu driver plying the Gachie route, then later a taxi driver before starting my own taxi business in Mombasa.

Did you ever go back to school?

I went back to finish high school at 24. And I am currently trying to finish my degree in Business Management. You are already running businesses. Why get that degree to learn what you already know? Did I really need it? No. I had already employed myself. Furthermore, failure in education is not failure in life. Lack of education did not prevent me from getting to where I got to in any way. But I am gaining a lot of knowledge with this degree and I hope to graduate soon.

Your new song Lotto is about a young woman flush with cash. Would you say that you are frugal or a spendthrift?

I am not extravagant. Not at all. I can wear the same dress for a week if I need to and I will not care who says what about it. Instead of buying a pricey handbag, I take that money and invest it. I do not hang around social groups and I hate people who brag, especially about having spent money in clubs. That is not an investment.  My child may need the money later on, so I am not going to waste it. When I got pregnant, my second husband gave me money to cater for the child and I came back here and invested it.

What have you learnt about love from your romantic relationships?

Would you add more children to your brood of five?

Yes. I plan on getting another child in four years. By the time I am 40.

What do you think of how Kenyans receive your music?

Kenyans are pretty hard to please. This is one of the first tracks I have done that has been received so positively, I feel really good about it, and about the concept of the song. It is about a house help who wins the lottery and goes on to spend it with her love. The message is that everyone, even ‘lowly’ employees, deserve to be loved.

What do your parents think of your career in music?

At first, my parents were not happy about me getting into music and my mother still does not like my way of dressing, but they are happy with my success. My music career has taken me places. Like the first time I tried getting a visa to America, I was denied twice despite having good bank balances, but I eventually got a visa to attend the All Africa Music Awards.

What can we expect from you in the future?

I will be dropping an album next year in March. I am also mentoring two girls I selected during my Safaricom Twaweza concert in Kisumu. In November, I will be performing at the One Africa concert as the only Kenyan artiste, and it will be my first time in Dubai. I also have plans to start Madam Boss Institute of House Management to train home managers. Sometimes, I struggle to get people to take care of my pools, and others are struggling to get employees to do different things. You can tell someone to make beds, yet they do not even have beds where they come from. So we are going to train people to be nannies, chefs, housemaids, cleaners at a professional level.

Do you have any life regrets?

None at all.  If I wished I did not give birth when I did, then I would not have my daughter who is the new face of Nivea right now. Or the director of Akothee Safaris. So there is nothing that I wish I had done differently.

Last one, how do you keep so trim? Are you a fitness freak?

I eat anything, but I take very good care of myself. I avoid negative energy, and I do sports and rope-jumping. To keep stress at bay, I avoid gossip and WhatsApp groups, because if I feel low, how can I take care of myself?

Get your copy on Sunday standard , I had no body as a role model but my mother , I hardly knew any celeb apart from MUSA JUMA & yondo sister , I blame no one for the mistakes and choices I made in life, I AM WHOM I AM TODAY BECAUAE THAT’S THE PERSON I HAVE ALWAYS WANTED TO BE . I DONT COPY NOR ADMIRE PEOPLES LIFESTYLES , BUT YES I MISS SEING MY CHILDREN HAPPY WITH THEIR BIOLOGICAL FATHERS . But hey it’s not the end of the road . Life must continue

All The Trending Images in Nairobi This Monday < Previous
China Has No Colonial Experience to Take Over Kenya- Tuju Next >
Recommended stories you may like: