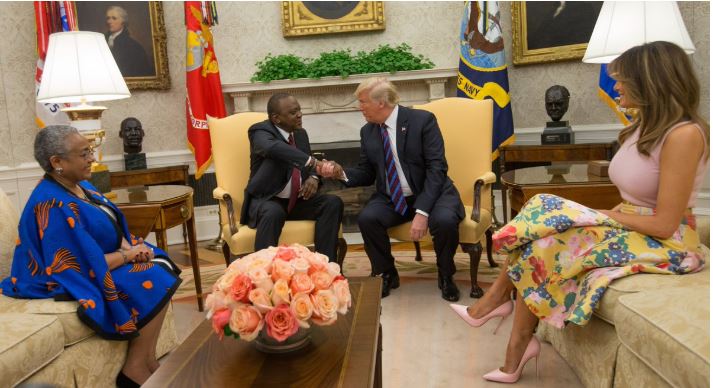 President Uhuru Kenyatta wrapped up his official visit to the US with a message that Africa is open to mutually beneficial trade and investments with the world.

Speaking to the BBC just after his meeting with President Donald Trump, President Kenyatta observed that Africa has come of age and does not look to the world for aid but how to foster win-win partnerships that benefit all parties involved.

“There has been dramatic change across the African continent where people are beginning to get a better understanding of themselves, who they are and where they want to be,” said Kenyatta.

The Head of State added: “And we are looking at how we can partner with countries across the globe in partnerships that are not patronising but those that are anchored on win-win positions.”

Uhuru Kenyatta spoke shortly before he departed Washington DC on Monday evening after a busy day that saw him hold bilateral talks with President Donald Trump as well as meet business executives of leading US companies- during which he witnessed investment deals worth USD 238 million signed between Kenyan and US companies.

President Kenyatta termed his meeting with President Trump a big success, saying it cemented a relationship that was already strong between Kenya and the US.

“The meeting with President Trump was fruitful. We discussed security, especially the fight against terrorism. We also discussed how to increase trade and investments between our two countries and how US companies can help create jobs for our youth,” he concluded.

The successful US visit by President Kenyatta is a major boost for his administration’s Big 4 development agenda especially since it comes just weeks before the much anticipated direct flights between Nairobi and the US.

Uhuru was accompanied on the visit to the US by First Lady Margaret Kenyatta as well as Cabinet Secretaries Monica Juma (Foreign Affairs) and Henry Rotich (National Treasury) among other senior ranking government officials.

The Trending Pics in Nairobi Today < Previous
DPP: DCJ Mwilu Arrest Not Influenced by President Uhuru’s “We Shall Revisit” Next >
Recommended stories you may like: