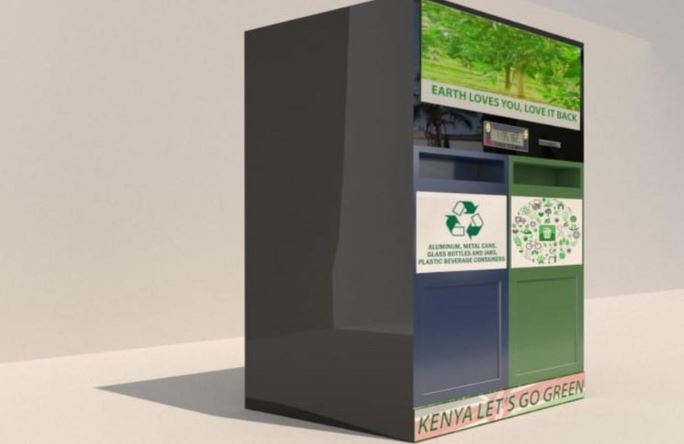 Nairobi’s waste management challenges could soon be a thing of the past if plans to install garbage ATMs in the CBD are successful.

The high-tech garbage bin is the brainchild of Kenyan innovator, Lulu Ahmed of Next Level Escalating Enterprise, who said at least 40 of the machines will be installed in the city centre.

According to Lulu, street children will be involved in the collection of the garbage from residents. No fees will be charged.

The machine, which is shaped like a refrigerator, reportedly weighs and classifies garbage and issues a prize voucher.

It features two bowls on both ends- one for organic waste while the other bowl will be for recyclable waste like plastics.

The machine has a sensor to identify the kind of waste deposited. When waste is deposited on the wrong bowl, it will be rejected and a pointer will direct the client to the right bowl, the Star reports.

It also has a screen for corporate adverts as one way of generating income for the project’s sustainability.

“At least this(screen) can provide entertainment to the street families or even news,” Lulu told the Star on Wednesday.

The innovator noted that the machines will not only improve waste recycling but also create jobs for the street families.

She said she developed the concept but the machine was built in Turkey.

“I went to China, sold my concept but they asked me to wait for at least six months. It is until I consulted further that I got a company that understood my invention at Izmir in Turkey and the engineers agreed to work on my idea,” she said.

“We are identifying supermarkets where the vouchers can be redeemed in kind. The waste will be recycled and sold to make the programme sustainable.”

“We welcome its use as long as the actual operation and installation meet legal requirements, especially those set by Kenya Bureau of standard (KEBS) and NEMA.”

The Trending Images This Furahiday < Previous
David Ndii: I Smoked A lot of Marijuana in My Youth…Legalize It Next >
Recommended stories you may like: