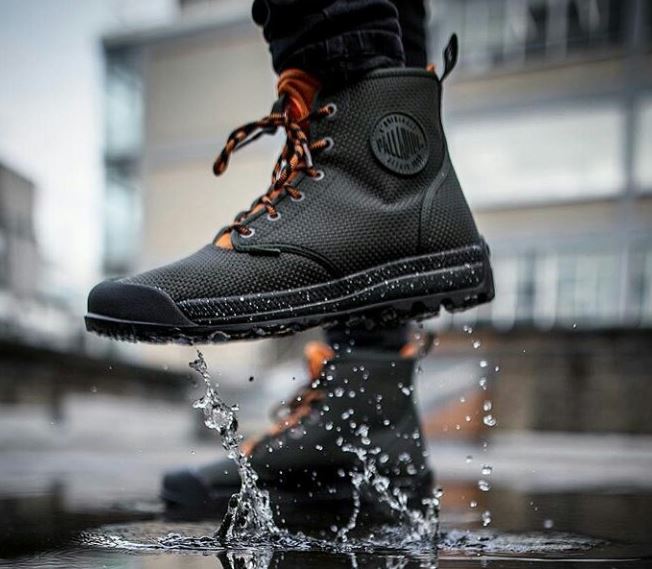 Over 90 years of authenticity and heritage. That’s the hallmark of Palladium, a timeless shoe brand that launched in Kenyan stores on 6th July 2018.

Founded in 1920 in Lyon France, the company had its roots first in the aviation industry. They were well known experts of making airplane tyres and after World War II, yet another chapter of their excellence was conceived.

This was the birth of Palladium. The expertise they had in making tyres was duplicated in making shoes that were both comfortable and durable. They were so functional that they were picked up by the then legendary French Foreign Legion and have since become the shoe of choice for all open minded and audacious explorers.

The brand still continues to be relevant to a new global generation of creative explorers often copied but never equaled.

This worldwide gem is now in the country ready to take on style conscious individuals between the ages of 15-36 across the various cities looking forward to dare the urban jungle.

It was received with great excitement with a set of creatives and fashionistas taking time to sample and interact with the brand through the #DareTheUnknown which became an instant online sensation just like in many other parts of the world.

Keziah Kabutu Advertising Manager at Bata Kenya, “Bata is proud to have collaborated with some of Kenya’s influential and leading creative minds to showcase #Daretheunknown collection which is in select Bata stores in Nairobi. “

“This collection and marketing communication goes hand in hand with the global brand manifesto Me & Comfortable with it which Bata pays tribute to healthy self-confidence to our customers through footwear. Palladium is one of those brands enhances this communication through a customer’s shoe game.” She further added.

Have a look at some of the posts made by the select influential personalities:

So @batakenya challenged me to #DareTheUknown and this post means your challenge is accepted! My entire life is about daring the unknown! 5 years ago I moved to this city, I felt it was time that I started practicing PR among the Giants. I bet y’all didn’t know my name then…I barely knew anyone either. I trust you know my name and what I do today! Over 10 years ago, I went to Paris for the first time…armed with my map, point to shoot camera and broken French. Since then have explored the world! I am not where I want to be but every day I #daretheunknown. Yesterday I challenged you all to manifest your next destination, when we meet at the airport don’t just tell me that you follow me..tell me you manifested and you are off to #daretheunknown Tag someone and challenge them to #daretheunknown with @batakenya shoes I would like to challenge @vonetteorinda @winnie.odande @fenamenal @silvianjoki @keziah_kabutu @denim_and_cateye @brianbabu @stellahcharles @mwendemacharia @iamladymandy @archietoursandbespokesafaris @wambuimukenyi @sandramwelumutinda @katdera @muthoni.kirumba and all of you! Shoes from @batakenya

Happy feet, happy story. ? . Y’all know @batakenya has always been one of my dream brands to work with, #FenaNgomaZakoNiKali, and thanks to all the lobbying by my fans, friends and colleagues, it’s been a privilege to work with Bata Kenya as an influencer. Here’s hoping that someday I make brand ambassador ? . But until then, let me strap up my new Palladium boots and keep blazing my trail, #DareTheUnknown. Wish me well just as much as I wish you well in your endeavors ❤

They say all you need is 20seconds of insane courage and everything could change. May you get it when you need it. #daretheunknown #doitdifferent #doitscared #styleoftheday #dandestyles

Over the years I have learnt not to let the fear of the unknown keep me from achieving my dreams. I’ve once been bold enough to fly out of the country for a job interview that I ended up not getting and I don’t regret at all, in fact I would do it all over again if I had the chance. The experience that came with that bold move was worth it. Don’t think of the unknown as a dark and scary place, what if it held the future you dream of? Ankle boots @batakenya #daretheunknown #comfortablewithit#bata #ootd #inspiration #boots #fashion #realstyle #fashionblogger #batakenya