REVEALED: The Staggering Amount of Money Stashed By Kenyans in Swiss Banks 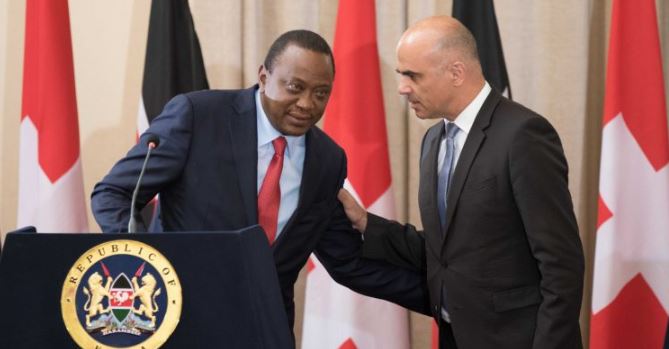 The Swiss National Bank (SNB) data has revealed the whopping amounts of money stashed by Kenyans in Switzerland.

According to data by the bank, the amount deposited by Kenyans by the end of year 2017 stood at a staggering Sh96 billion (950 million Swiss Francs).

The funds include deposits and fiduciary liabilities(money held by Swiss Banks in trust on behalf of clients).

Last week, President Uhuru Kenyatta and his Swiss counterpart Alain Berset signed a key agreement that clears the way for the recovery of assets acquired through corruption in Kenya and stashed in foreign countries.

The agreement dubbed Framework for the Return of Assets from Corruption and Crime in Kenya(FRACCK) will create a mechanism for Kenya to recover money stolen by corrupt individuals and hidden in the three countries- Switzerland, the United Kingdom, and Jersey Island.

The first assets to be targeted by the new framework will be monies stolen through the Anglo-Leasing scandal.

Treasury Cabinet Secretary Henry Rotich also announced that Kenyans with wealth abroad have one year to repatriate it.

EACC Raids Home of Businessman at Centre of Ruaraka Land Saga < Previous
Prison Warder Who Ran Over KU Student Pleads Guilty to One Charge, Denies Two Others Next >
Recommended stories you may like: