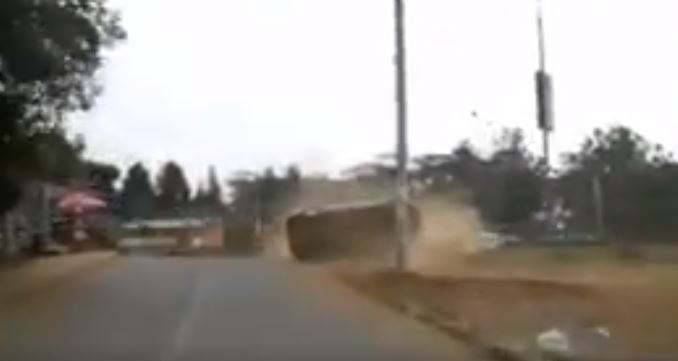 A dashboard camera video has been shared online showing the moment an erratic driver lost control of their vehicle while overspeeding on a sharp curve in Nairobi’s Kasarani area.

The video, which was shared on Twitter by @tyrus_, shows a motorist cruising smoothly along the Neema Section of the Kasarani-Mwiki Road before a black Toyota Allion came barreling down as it approached a bend.

As the driver of the Toyota approaches the Thika Superhighway after the curve, they appear to lose control and overcorrect a drift by abruptly turning the steering wheel in the opposite direction from where the car is going.

Being one of the most common driving mistakes, the driver’s overcorrection led to a vehicular rollover and landed on its passenger side just metres away from the busy Thika road service lane.

The lucky driver was then assisted by a group of passersby who turned the vehicle up in a matter of seconds.

Somewhere in Kasarani this moron thought he had the same cornering abilities as those of a Bimmer. Hope he learned his lesson. ?? pic.twitter.com/dbY2Hqy6KX

Hilarious Meme Compilation (Thursday July 26) < Previous
All The Images Trending This Thursday Next >
Recommended stories you may like: