Apologise to Kenyans or Get the Sack, Ekuru Aukot to Eric Kiraithe 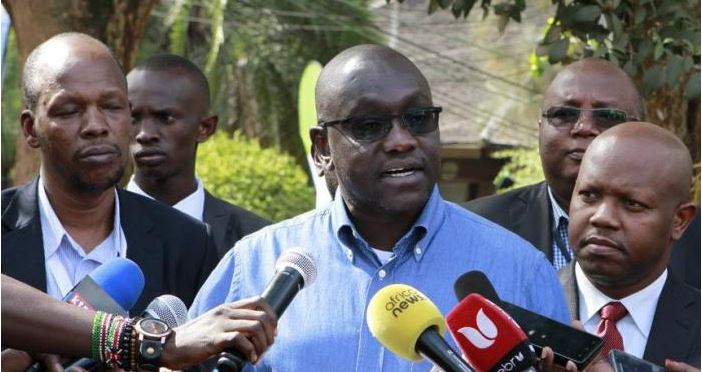 Thirdway Alliance leader Ekuru Aukot has asked the Government Spokesman Eric Kiraithe to apologise to Kenyans over his response to alleged discrimination of SGR workers or face sacking.

In a statement, the Thirdway Alliance party termed Kiraithe’s statement as ‘ridiculous and careless’.

Aukot said, “Our party is appalled and utterly disgusted by the statement issued by Mr. Erick Kiraithe for clearly supporting the mistreatment of Kenyans by illegal and criminals immigrants from China masquerading as experts on the SGR project.”

The self-proclaimed Opposition leader added that Kiraithe’s remarks normalized the killing and torture experienced by Kenyans in foreign countries like Saudi Arabia, South Sudan and Ethiopia.

“What is more insulting is that Kenyans are being humiliated and toured by foreign nationals on our own soil and in the capital city of Kenya,” Ekuro said.

The former presidential candidate also challenged the government to ensure that the Chinese crew found guilty of mistreating Kenyans face the full force of the law.

Aukot further demanded the sacking of all Chinese engineers in the SGR project claiming that Kenya has enough engineers to run the SGR locomotives.

He said the party leadership will be going for a fact-finding mission at the SGR station in Syokimau today.

Senator Omanga: My World Cup Trip to Russia is Self-Sponsored < Previous
The Hottest Stories on the Internet Today (Monday July 16) Next >
Recommended stories you may like: