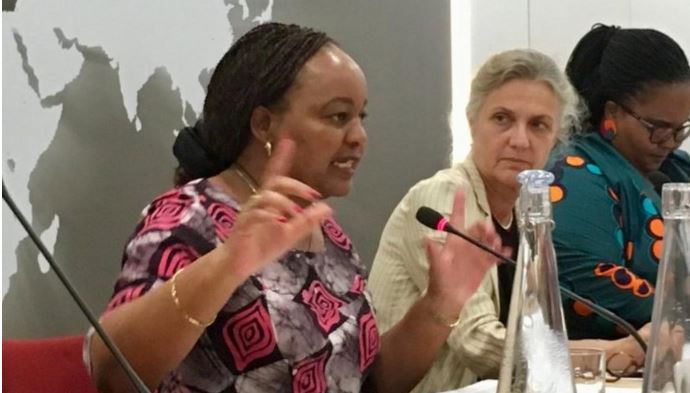 A section of Kenyans online are in a state of bewilderment after Kirinyaga County governor Anne Waiguru gave a lecture on corruption.

Speaking at London-based think-tank Chatham House, Waiguru welcomed the lifestyle audit by President Uhuru Kenyatta saying politics and weak structures are the greatest hindrances to the fight against graft in Kenya.

“It’s (lifestyle audit) a big step forward. A huge problem in Kenyan politics is the pressure from families that want to benefit from their relative’s time in office. This is why the president has rightly opted for the audit,” Waiguru said.

Waiguru, who was invited to give a talk as the vice chair of the Council of Governors, said she is not surprised that another scandal has rocked the National Youth Service.

Recounting how she invited investigators to probe the Sh791 million NYS scandal during her tenure as Devolution CS, Waiguru said that, through her lawyers, she had written to the Ethics and Anti-Corruption Commission (EACC) at least six times between 2016 and January 2018 of this year asking them to make public their findings.

She said she had suggested that a public inquiry be set up so that the truth could be made public.

“It is, therefore, no wonder that three years after I left the ministry, the same NYS department is engulfed in another major scandal of Sh10 billion, 10 times larger than the initial one,” said Waiguru.

The governor observed that despite being the whistleblower in the Sh791 million scandal, she was vilified, and continues to be implicated in sensational affidavits despite being cleared.

“What I did not know was that I had attracted the ire of faceless individuals that were behind the scam which led to a political rebuttal,” said Waiguru.

She said the fight against corruption could not be won without evaluating the forces involved.

“Transitional economies like Kenya exhibit the identical challenges of weak accountability structures and ineffective institutions resulting in waste and loss of public funds and resources.”

“Regarding accountability, a danger is that the fight against corruption becomes politicised and used by individuals to harm their enemies. Social media can be a key tool in the fight for greater transparency,” Waiguru said.

In the Wednesday talk titled “Five Years of Devolution in Kenya: Towards Inclusion, Gender Equality and Accountable Governance”, Waiguru also lauded devolution on its inclusivity towards equality and gender.

As expected, Waiguru’s talk has surprised some Kenyans who see it as laughable and ironic.

A third Kenyan added: “Sasa ni mambo na kujisafisha. I now see the reason why she demanded Moha Jijcho Pevu to publicly apologize to her 2 weeks ago. It is because she already had this invite by Chatham House and what Moha had said on TV would have killed this cleansing opportunity for her.”

Another wondered, “Surprise, can Waiguru for sure account for her wealth? When did she learn about the structural weaknesses of our institutions? Did she exploit the weaknesses to enrich herself? Does the lifestyle audit cover her too? How far back in a person’s life does it go back?”

A fifth commenter wrote: “Mastermind of Kabura season 1 lecturing on corruption and she had to resign because of theft of taxpayers money go tell it to the birds.”

While another exclaimed: “The face of corruption in Kenya, speaking against corruption. ONLY IN KENYA!”

Huduma Centre ICT-Services Restored After Nationwide Shut-Down < Previous
All The Trending Images in Nairobi This Friday Next >
Recommended stories you may like: