We Were So Broke We Couldn’t Afford Meals and Rent, Amos & Josh Explain Hiatus 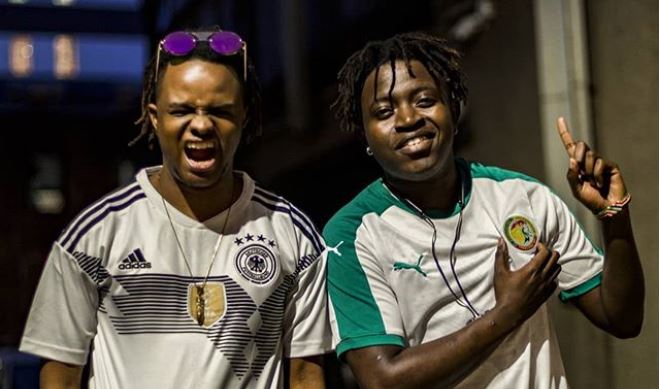 Former Tusker Project Fame contestants Amos & Josh have finally addressed their absence from the music scene for over a year.

According to the duo, 2017 was a crazy year for them both musically and on a personal level.

“It was very dark in every aspect, financially, mentally, spiritually,” said A&J.

“There was a lot of pressure around us to change our course of music to fit with what was heavily on the airwaves at that time. We also had problems with our production deal to the point we didn’t go to the studio for months, maybe like half the year.”

The ‘Moto Moto’ hitmakers further revealed that they were not getting any shows and were so broke they could not afford to pay for meals and rent.

“We would be at events and hear people talking smack about us, telling our management how we are waste of time to them. At the same time, no shows were coming through and we were so broke to the point of missing meals and lacking rent and other basics.”

“We got to the point of questioning whether we are really doing what we were meant to do hadi tukakosana sisi wenyewe and everyone wanted to go their own way. Maybe AJ would have been no more,” said Amos and Josh.

However, the silver lining to that ‘crazy’ year is that Amos and Josh are back stronger and more focused.

“But here we are family, still courageous. All this made us, maturer, stronger and more focused on giving our contribution talent wise and as individuals to our society,” A&J said. 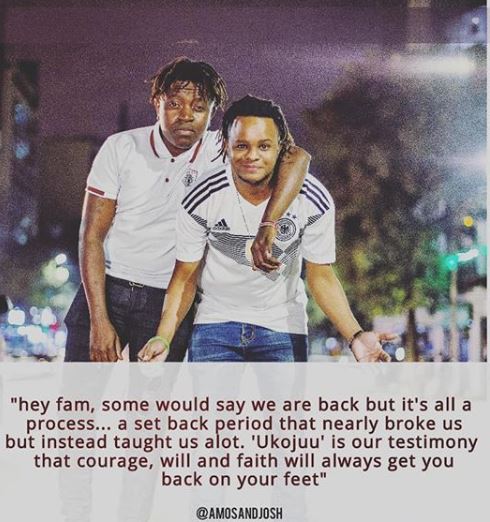 To mark their comeback, the two-man band has released a new song, Uko Juu, ahead of their expected album release in August.

“It[Uko Juu] speaks so much of us and our career, we’ve been through a lot and a lot of negative things have been said about us but we choose to still believe that the shine within us will still overpower the darkness around. This is the first single with a vintage video as we let you in on our story,” explained the TPF 2016 Runners Up.

“It was recorded early 2017 but it has never been more profound for us as now.”

The song features Abel Chungu and it is giving music lovers the feels.