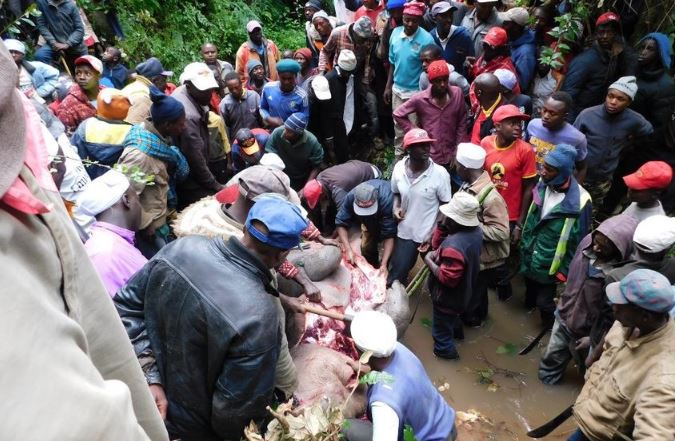 Residents of Githunguri and Mugumo villages in Ol Kalou, Nyandarau County, had a weekend to remember as they feasted on the exotic meat of a hippopotamus.

The female hippo had strayed from Lake Ol’ Bolossat before it was spotted by residents at Kiganjo dam which is at the edge of Ol Kalou town on Ol Kalou-Kipipiri road.

KWS officers from Nyahururu camped at the dam with hopes of scaring it back into the lake but it strayed further west, 5km from Ol Kalou town to Mugumo village where it was spotted by locals at 5 am Saturday.

The locals then mobilised themselves and chased it down across Mbichu’s valley that divides Mugumo and Githunguri villages as they shouted “Nyama”, and  “It’s Our Time eat”.

On the other side of the valley, along Mbichu-Rakeri road, the hippo was cornered by other residents who chased it with dogs through the farms and back to the stream at Mbichu’s valley.

The already scared and injured animal hid inside a bush in the stream before KWS officers shot it. They said it was not possible to pull the animal from the deep forested stream.

“We have done all we could. To us, the animal is now disposed of. No resident should go near or even eat its meat,” a KWS officer told hundreds of residents who thronged Mbichu’s valley.

But the villagers could hear none of it and descended on the hippo’s carcass with axes and pangas, each cutting enough for their families.

According to a report by a local daily, some of the residents fed on the hippo’s raw meat oblivious of the health dangers posed.

“The meat does not pose any health risk as the hippo feeds purely on fresh vegetation. Rift Valley Fever means nothing to us. The hippo cannot even have anthrax,” one of them is quoted as saying by the Star.

The locals thanked KWS officers for quick response upon being notified and also for killing the animal; thereby “making it possible to get free meat”.

“They killed it in the right way and left us to eat. Some of us are very excited and that is why they are eating raw meat to feel the taste,” Lucas Mbugua said

“I don’t know whether those eating raw meat are normal. But again, some of them work in slaughterhouses where they eat raw meat,” Wangari Nyoike said.

Other wildlife officers regretted the animal’s death saying the situation would have been handled better.

“Where it is now, it would be easy to trace its way to the nearby dams and eventually to Lake Ol’ Bolossat. It did not deserve to die,” an officer who requested anonymity said.

He said the residents need to be educated to care for such stray hippos instead of killing them of meat.

“If this trend continues, they will eventually finish their animals.”

Hilarious Meme Compilation (Monday June 18) < Previous
All The Trending Images This Monday Next >
Recommended stories you may like: