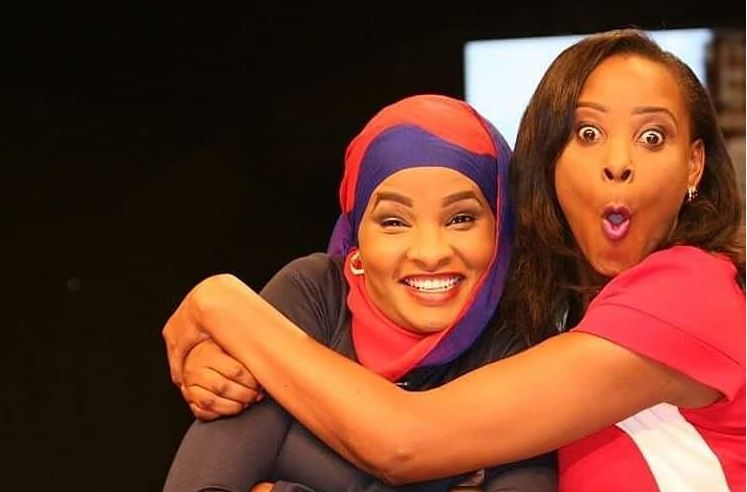 As Kenyans continue to celebrate Kanze Dena on her deserved appointment as Deputy State House Spokesperson and Deputy Head, PSCU, one person who is undoubtedly most affected by the news is Lulu Hassan.

The two Swahili news presenters have been anchoring the Citizen TV 7 PM news together for over half a decade and were the top news anchors in the country for four years in a row.

However, their formidable on-screen chemistry is no more and Lulu Hassan has paid a moving tribute to celebrate Ms Dena’s achievements leading to the State House appointment.

Read the tribute below and grab a tissue for the tears.

If you ask me about Gods ways, I will affirm that God works in mysterious ways. God favors his people. I know this to be true because I have seen it through our friendship, which, I think, was more accidental than intentional. Whichever way it came to be, I am grateful that you came along.

I remember us sitting and giggling nervously when the news was broken to us, that we were the top anchors in the country, 4 years in a row. 4 years of holding our breath, perusing through news of the day before going on air, holding frantic conversations and arguing on random things. Nobody knows what it is like to be an anchor like those who have to go through the process, driven, often by a strong desire to deliver nothing but the best. It felt, strongly so, that our audience had done an audit of our job. And they had given us another reason to rise and be the best we could ever be. It is not easy. You know. I know.

We both knew, and you said it over and over again, that it was the favorable hand of God. I cannot agree more.
Yet even with the knowledge, we never at one moment took it for granted. It was not ours to be boastful, or be comfortable. No. There is something about our profession that I cannot quite define, but I think it has to do with the fact that your real boss is the audience. And they have the final say on whether you stay. To meet their standards is hard work. But with you, the journey has been gratifying.
Then came your appointment yesterday by the President and the reaction that has followed….as we perused through the comments and congratulatory messages and the never ending calls and what was coming from your mouth was ASANTE MUNGU.

We have been friends for long for me to know what this comes down to. HUMILITY….. and never letting the “celebrity syndrome” be the driving force …See what has transpired now ?

We kept this news all under wraps for some time because our WHAT NEXT was haunting us as days passed by and yesterday it just dawned on me that woooahh this thing is real …after working together for about 5 years and a few months …I say thank you God for you know what we have been through and how our past looked like…pairing with you has been a blessing just as you always rightfully put it ..it worked both ways and I for sure knew your time is coming and that you are headed for greatness..Many would ask you ‘why aren’t you into the film industry like your friend and you would graciously tell them that that is not your calling and that God had plans for you but in different avenues….Alas!!…it came to pass

What people do not know about you is that you are a prayer worrior and that you hardly do anything without telling me ‘Lulu acha niombee hili jambo’..and you had those instincts like…’roho yangu haitaki huyu rafiki yako..there is something about this person wish I had listened earlier on but blimey shock on me (story for another day)I remember when we were all being poached from our respective companies to join another which was offering some lofty amount, we were enticed to say the least but BOOM !

In your typical kind of way you said ‘’mamaa don’t sign let me go pray for this letter and by morning I will tell you the way forward…and true to your words you dropped the bomb shell ‘MUNGU AMEKATAA LULU’ …And slowly we went back to our respective companies back in 2013. And trully God works in mysterious ways. A few days later ..I would receive a call from my mentor and boss Farida Karoney..’wewe Lulu uko wapi ?..hii ni story gani nasikia unaenda …?.tukutane hapo Nairobi West..and the next minute am with you as a colleague ..news that you did not believe until you saw me at Maalim Juma Road..at first adapting was not easy……but you made me feel welcome but at no point did any of us think that two females would be paired to do news together.. I recall vividly that election day we were thrown huko kwa deep end after realising that there were no intros on the autocue and no proper autocue…we prayed and said lets do this !!!!Good Lord for 3hrs we stood there talking to Kenyans and we personally did not know about the impact and chemistry we exhibited..but i remember Willis Raburu telling me that ..eeeh dada mmesalimiwa na watu wa Kisumu wamewapenda sana ..

It would be followed by Waruru Wachira’s strong feeling that we were a good pair on screen. And just like that, that was the birth of the dynamic duo which I will forever be grateful to the entire RMS fraternity… The journey here has not been an easy one. You and I know that. I remember us having a hard time since we use the same tailor so obviously we would have dresses that were of the same shade and we would end up being matchy matchy and stuff and bosses were not so comfortable with it.

What people did not know is that at no point would we decide what color to spot…etc but whatever we would carry from home would end up being matchy matchy… our makeup artists can attest to this… I celebrate you in so many ways. I will always remember how cautious you were about the length of your dress. How you would change many times over so that you had the right length on…’dadaa hii sitaki inanionyesha magoti…dadaa hii imenishika sana..dadaa hii nguo leo itabidi tumwambie director tukae kwa viti ‘That is Kanze for you !! She is the person who would go to great lengths to make sure that whenever am not well she is always there for me ..A case in point is when I gave birth to my second born who is 4years now she would do the daily visits.

You would bring your cousin Zakia Nzai and leave her with me for a while and you would come back and pick her up ..all this was just to make sure that I was well attended to..that’s sisterhood!!!… During Ramadhan you would fast with me na tufunguwe pamoja just when we are about to read our weekend bulletin still puzzles many….. Mine is a celebration of our friendship, urafiki wa dhati, the kind that is far beyond good chemistry on air.

But you know what as always we have each others back and we prepared well on the WHAT NEXT…And I can proudly say am in good hands.

Kitui School Head Released on 50K Bail For Raping Form Four Student < Previous
Ngirita Complains That She’s Surviving Only on Samosas in Prison Next >
Recommended stories you may like: