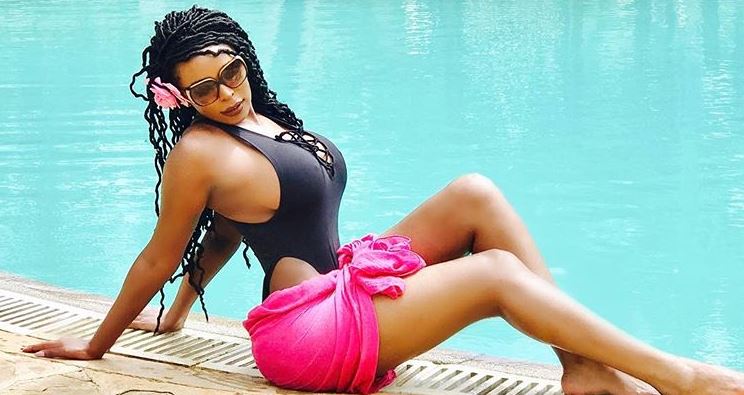 Kenya’s gospel industry has been put on the spot once more, this time by former Miss Universe Kenya Rachel Marete Mbuki.

The former beauty queen, now based in Los Angeles, on Thursday, took to her Instagram page to get some heavy matters off her chest concerning Kenya’s often controversial gospel music scene.

“The gospel industry in Kenya is a joke!!!” declared Rachel.

In a series of posts, the television presenter shared some of her “unGodly, unforeseen, encounters with some of these Kenyan gospel industry luminaries.”

In one encounter, Mbuki narrated how a certain unnamed gospel artist made unwanted advances on her. When she turned him down, the said artist turned into a stalker and even flew to America when Mbuki relocated from Nairobi.

PART 1: #storytime OK everyone. Pull up a chair and get some popcorn because it appears I’ll be the source of some messiness today. I haven’t “social media beefed” with anyone probably since, idk, Alisha Poppat back in 2012 LOL. Oh to be 25 and opinionated… Today, however, I’m gonna take this opportunity to get something off my chest. Something a lot of us feel. The gospel industry in Kenya is a joke!!! Yeah, I said what I said so nobody @ me.

For those reading but don’t know, in Kenya, the gospel music industry pops more than the secular one. Therefore, musicians hoping to make any kind of a living through music will usually have a better chance of doing so as gospel artistes than in any other genre. Everything from audio and video production quality to A&R, artist management, and gigs is better.

As a result, the industry is littered with a bunch of heathens looking to secure a bag. All they gotta do is pretend they rock with the Jesus crew. Most Kenyan Gospel music is really just a club banger with the word Jesus or God mentioned a couple of times.

Heck, Kenya is the only place I’ve been where gospel music gets played in clubs with people twerking to it! Really. It’s a thing. Heck, I once saw a girl give a sexy lap dance to a dude in a club to a popular Kenyan gospel song WHILE singing it to him! So damn awkward… but it’s a thing. No. Really. I seemed to be the only one that found it weird too. Not to mention Kenyan gospel “Kesha” concerts are pretty much every Kenyan teen’s “rave experience” since parents won’t let them go to clubs. Just smuggle in booze and get down to the beat all night and AAYEEE it’s a lituation ??????‍♀️. Sorta a right of passage, if you will.

On this post series, I’m gonna give three short story examples of some of my unGodly, unforeseen, encounters with some of these Kenyan gospel industry luminaries.

PART 2: To preface it all, let me just make it clear that I am not what one would call “religious” or a “Bible thumper” by any means. I hate discussing religion and I haven’t been to a church in ages. I try to respect everyone’s beliefs. Secondly, not all in the Kenyan Gospel Industry are bad apples so if you’re one of the few good ones, this post isn’t about you.

Nonetheless, I have had the pleasure (displeasure?) of chance meetings with some of you and here are 3 that stand out for now…

1. When I lived in Kenya over 12 years ago, I was introduced to a popular gospel artist by some mutual friends at a chance meeting. Back then I was a doe-eyed innocent little 18-year-old that had just won Miss Universe Kenya. This particular artist took, what you may call a shining to me. Only thing is I wasn’t in the least bit interested. Like, AT ALL.

He couldn’t believe it because, you see, this one is of the breed of gospel artists that aren’t at all afraid to show off material wealth and what not. I suppose I was meant to be taken by his celebrity and nice car or whatever. So what does he do? He proceeds to stalk me… HARD. I was terrified of him. He honestly made my skin crawl. I couldn’t stand the thought, let alone the very sight of him. Nonetheless, relentless was he. Every time I changed my phone number he would miraculously uncover and rain down incessant text and phone calls from different numbers, day and night, demanding I give him a chance. Now there’s admirable persistence and then there’s harassment and obsession. All his “requests” always had a creepy “or else…” tone to them. Luckily, a year later, I got the chance to move to Miami. All of it was now behind me! Boy was I wrong.

PART 3: You see, back then, in 2007, Facebook wasn’t a thing. It was just this weird boring site only used by college kids. The rest of us were rocking it out on MySpace (I still don’t get why it went away. I mean, we could put background art and music on our profiles. It was awesome!. Anyway, I had my cute little MySpace profile cluttered with my bikini modeling pics and a few thousand followers which meant a lot went down in the DMs. On one fated day, however, I check my DMs and there goes said gospel singer/ horrid stalker (!). It turns out that he is coming to America and wants to meet up.

1. America is not Nairobi. You are going go to be in Arkansas or some far off countryside state so it’s not like I can catch a 15-minute taxi ride and meet up with you at the mall. 2. Even if I could, HELL TO THE NAH I wouldn’t come meet your creepy behind anywhere! So I decided to do what I’d always done. Ignore and he will go away. After sending numerous DMs, they stop one day and I figure that’s that, he’s gone back, who cares, right? Wrong! This child of God decides to go back to Kenya and spread a rumor about me to as many people in the modeling and entertainment industry as possible.

“Rachel is living in Miami with a 90-year-old white man and she wouldn’t stop cheating on him so he kicked her whore a** out and now she is homeless and suffering in Miami”. Very Godly, right? I guess that’s what I got for having the nerve to turn him down. I guess I needed punishment!

It was the perfect rumor too because people in Kenya love to stereotype all models and beauty queens as gold digging hoes so I guess that served me right. LOL. I bet you could never tell what a stage 5 clingy, creep he is from his Good Lord worshipping music though. Encouraging people to do good deeds and love thy neighbor and what not. PS: this person is still one of Kenya’s biggest gospel artists. I’d say he’s like a Kanye of Kenyan gospel? You know, been around since the early 2000s, still releasing hits (only I don’t think his music is necessarily great), has an erroneously huge ego and is always in the news for his eccentric, flamboyant ways. CRINGE! ? part4 loading

PART 4: Never heard from him after that though, so I guess he was pretty satisfied with his little revenge plot. Until a couple of years ago, that is, when I was in Kenya and happened to meet someone he knew in common. He got my number from them and the calls started. He offered (read insisted) to have me flown from Mombasa to Nairobi in “one of” HIS choppers and generously offered me (read insisted) accommodation in one of his lavish mansions. I could have it all to myself, he said. Just me and the servants. He was to spare no expense. Same MO. Try to impress with “stuff” that I highly doubt he owns. Where’s the Christian humility he sings about though? Anyway, he wasn’t taking no for an answer until I told him that I knew about the rumor he spread all those years ago and I wasn’t interested upon which he quietly slithered away never to be heard of again. No news on whether a new rumor was started this time.

I’ll tell you about the other two encounters tomorrow.

I Miss Having Zari as My Friend, Huddah Opens Up on Fall Out < Previous
Hennessy Global Brand Ambassador Visits Kenya Next >
Recommended stories you may like: