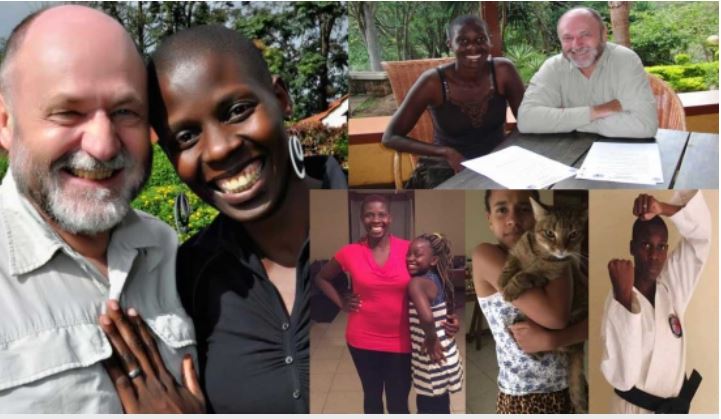 He first married at 21 years and had a very happy marriage that lasted for over 20 years, before his wife and mother of his children left him for another woman.

He eventually moved on and dated for a while before meeting the woman of his dreams here in Kenya, one Caroline Tolo, a Black Belt martial arts trainer, who gives classes in self-defense.

During a conversation with freelance journalist Yvonne Aoll, Chris Hart opened up about work, love, and the moment he almost gave up.

Has chance always played a huge role in your life?

It has. When I look back, all the key turning points of my life were influenced by chance.

Do you think everyone gets to experience this, chance?

Certainly, I think chance strikes in everyone’s life. They call it “serendipity.” The difference is that some people take note of it and some don’t. If you’re always walking while looking down at your feet, you won’t notice it. And even if you do, you won’t make the most of it. However, there are those that pay attention, take note of what’s happening and make something out of it. That’s the difference.

Is that how you met your wife, by chance?

Yes. (Laughs) We met via the internet.

You met via the internet? In those days?

Yes, (laughs again), in those days! I was writing for the Nation. She wrote to me about an article I’d written. I wrote back to her. Somehow the conversation stuck. And this is strange, because many people write to me, very many people. I reply, and we converse a little, but it hardly ever goes any further than that. With my now wife, the conversation just kept going.

Well, she’s Luo, she was in Kisumu at the time. I started finding excuses to make trips to Kisumu to meet her.  I remember one time we were sitting across each other at a bar, and something happened,  We both just knew this was it.

Do you still go to Kisumu often?

No, not often. My work is always around Nairobi now, so not often.

Where were you at 25 years old?

At 25, (thinks)…I was working as an industrial chemist. It was a job that allowed me to travel and work around the world.

In your travels, what country did you find to be your favourite?

Well, I didn’t have a favourite at the time, as I enjoyed working in different places, but if I had to choose…this not including England, I’d have to say Germany. I worked there and in Austria a lot, learnt the language, made connections, adopted their way of life, I became a part of it.

How did you get into psychology?

Well, I worked in industrial chemistry for a while. And then at about 35, I began to realise I didn’t quite enjoy the job. Something was missing. The company’s values and mine were progressively drifting apart, so I had to reevaluate. I had increasingly had this need to understand why people did the things they did, as opposed to focusing on products. That’s how I ended up taking psychology as my second degree.

Do you enjoy being a psychologist?

Thoroughly. I love my job.

What’s the hardest part of the job?

Oh, I don’t think there’s really a hard thing about it, mainly because I enjoy it greatly. However, I think sometimes, one of the saddest things is when you’re not able to fix a client’s problem. That’s sad. For example, when they have a personality disorder. People with personality disorders almost never accept treatment.

Do you find Kenyans to be aware of personality disorders and mental illnesses in general?

Well, not just Kenyans, but the world in general, most people aren’t aware of them. Personality disorders are a complex thing.  Mental illness was often referred to as a medical issue treatable by drugs, but it’s now regarded as extreme versions of normal behaviour.

This is the case with personality disorders, there’s this spectrum we’re in, this general spectrum in the middle where most of us operate in, and then on the edges are the outliers, those with the disorders, who are often termed as “weird.”

However, the interesting thing is, as you leave the center, where most people fall, heading towards the outliers, you find a group in between to whom the disorders are a great advantage.

For example, people who are hypomanic tend to become very good entrepreneurs, and you almost can’t be a successful entrepreneur unless you are (hypomanic). But then go even further out of the spectrum toward the edges, and the personality disorders become a problem, one can’t cope with society.

So how do you counsel one who’s dating someone with a personality disorder?

My advice would be not to stick around.  In general, people should date backwards, which means once they’ve started dating and are noticing strange behaviour, they should find reasons to leave rather than stay.

There are tens of thousands of people out there who would match them, their job while dating, is to find those that match them.  As soon as they find out a person they are dating is “weird,” and this should ideally be in a matter of days, they’d better cut their losses and leave. Don’t spend four years with them before making a decision. Just leave.

I know it sounds terrible, but that’s just the truth.  Look, how do I put this, it’s a dog-eat-dog world. I think, if you’re one of the good guys, you deserve everything that life can give. Kind people, for example, should find and date and be with equally kind people.

So what happens to the ones with disorders?

Okay, but aren’t people with disorders victims of a circumstance they cannot necessarily control?

Yes, that’s broadly true.  At least for those who have full blown personality disorders. But there are also many people who lead weird lives who choose to live the way they do.

Yes, some have chosen to do what they’re doing. I see an awful lot of people who are dating someone whose life is a total nightmare in all sorts of different ways, and they inflict that nightmare on their partner. And their partner is left trying to sort it out and make sense of it and it’s impossible. So, if you want to make a good life of your own, choose someone who’s also trying to make a good life of their own.

What advice would you then give to someone who’s already married to a partner with a disorder?

I don’t know if there’s much advice I can give, except to suggest they get a good lawyer.

Again, it sounds terrible, but in the end, it really can’t be fixed.

Psychology in Kenya, are people receiving it well?

Now, yes. People are increasingly seeing the need to see a psychologist. They are open enough to ask for help where need be. I’ve been here for a quite while now, and when I first started, it was a completely different story; I went out looking for fellow psychologists and I only found 12.

12 in Kenya! And most of them were foreigners. There were more psychiatrists, all employed by the government, and almost no psychologists. We really weren’t many, and people hadn’t really heard about psychology, so my diary wasn’t often full; now it is.

People are very much aware of psychology now, and they see the need for it, even though the industry hasn’t fully gotten itself in gear yet. I should also mention that the psychology courses offered in the education institutions here, unfortunately,  still have a very long way to go.

You went from being an industrial chemist to a psychologist, does this presuppose it’s okay not to have life figured out by 25?

Oh, it’s not only okay, but I think it’s becoming increasingly difficult to have it figured out by 25. After all, people change. So who they were at 25 isn’t who they want to be at 35 or 40. I would highly recommend not making crucial life decisions at such a young age.

Like getting married. I first got married at 21. It was what people did then. You met someone, liked them and got married. We divorced 20 years later. We were too young to have gotten married.

In hindsight, knowing what you know now, what would you tell your 30-year-old self?

My 30-year-old self, (thinks with a long pause), I suppose I’d tell him to do what I did. “Evaluate where you are, seek something that aligns with your values, and then change course.”

Seeing as life is a journey, have you ever felt like giving up?

(Pauses and smiles in silence) Yes, when I got divorced. That was hard. It took a great toll on me.

How did you get through it?

I got up, and I put one foot in front of the other, and I continued doing what I was doing. I worked, I met people, I dated, and then I eventually found someone else. But it was hard.

What would you say to anyone hoping to work from home like you are?

Find a decent apartment, one with great space, and do it. A number of things happen when you do, you: save yourself lengthy commutes,  work all kinds of crazy hours and it doesn’t matter, limit overheads, don’t rent office space, it’s wonderful.

What do you think about millenials?

I don’t know if it’s millenials particularly, or the youth in general; I think they get discouraged very easily. They have great ideas, fantastic even, but when nobody buys, they don’t understand why and they get frustrated. They don’t realize yet that being fantastic, having incredible ideas, and trying to re-invent the wheel, doesn’t always result in the world rewarding you as you hoped. It doesn’t work that way.

It is. And it’s okay to be optimistic, but one also has to be in touch with reality. One of the things young people haven’t discovered is just how hard you have to work to make things happen. You can’t be easily discouraged. You have to keep trying.

Would that be your advice to the youth?

To keep trying? Yes. It’s okay to try and to fail. You just have to try and fail again until you get it right. Think Bill Gates and Steve Jobs…you have to keep trying.

Any last words or thoughts?