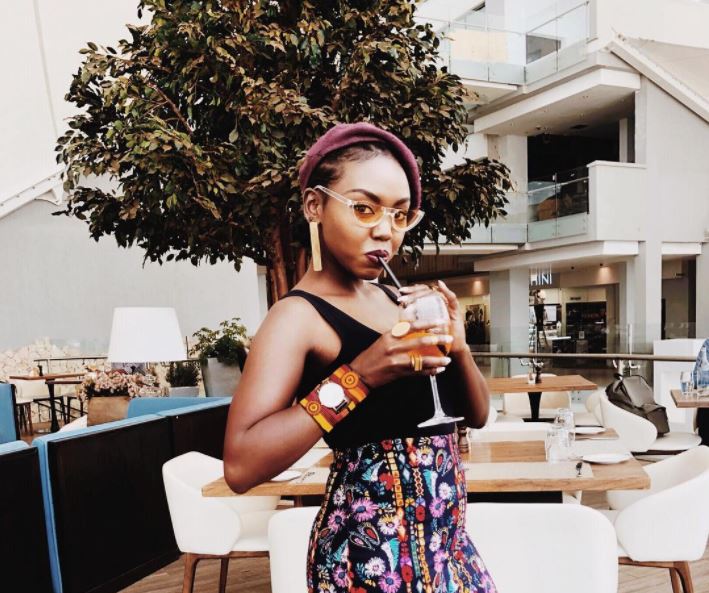 Patricia Kihoro first rose into public recognition through the reality-TV music talent show ‘Tusker Project Fame.’ Since then, she boasts a multi-faceted career as a singer, songwriter, actress, radio presenter, and emcee.

She is also a vlogger and through her YouTube channel, Patricia with her viewers some of her real-life experiences, including travel adventures and make-up routines.

While she has since responded to the claims, Patricia opened up about the rumor recently in an interview with freelance journalist Yvonne Aoll.

Patricia also talked about dating, plans to go celibate, and life in general.

Below are some excerpts from the interview.

Would you ever participate in another reality TV show?

No, I don’t think so. Not a housemate’s kind of set up. Unless it was special, something like The Amazing Race, that I would do. Especially because there’s a lot of travel involved, that, oh, that’s my kind of thing.

Are you and Ng’ang’alito still friends?

We are, but we don’t see each other much. The last time I saw him I was on a Bodaboda, he was too, and we were waving at each other and taking Snap-chats. (Laughs)

It’s been ages since the drama, but, do you and Debarl talk?

We do. I mean, we were never that close even from the beginning in the Tusker Project Fame house, but we were cordial acquaintances. And we still are. I see him sometimes and we acknowledge each other, exchange greetings, that kind of thing.

You’ve gone into YouTubing now, what do you think sets your channel apart from the rest?

(Thinks) The fact that it’s me. It’s my channel. I’m not trying to be like anyone else. It’s just me. I hope viewers come to watch it because they want to see Patricia.

The digital world is now super inundated with fashion bloggers, make-up content creators and general YouTubers, do we need any more of these? Do we need new people getting into it?

You know, that’s one of the things that made me procrastinate for so long before fully committing to YouTube. I used to sit and think people would judge me for being yet another celebrity going on YouTube, but I had to stop looking at what everyone else was doing and just offer what I have.

So, yes. We can have as many people as are willing. There’s room for everyone. With the internet, there’s room for anyone who’s willing to put in the work to shine. There’s no reason not to.

You sing, act, emcee and work as a radio presenter, which of these incredible talents you’ve been gifted with, truly personifies Patricia Kihoro?

(Smiles) Hmmm, none. They are all parts of who I am as a creative. And when I’m doing one, I focus on it completely, and give it my all. I never want to be put in a box, I was blessed with all of them, and I always want to know that in the end, I used everything I was given.

You work at Homeboyz Radio, what’s your advice to those who are looking to get into radio or the media industry in general?

Start with your own platform. Instead of radio, people are listening to Podcasts now. Start with that, then you have something to show for your talent, passion and persistence when you get a chance to meet a radio executive.

But also, radio is not what it used to be, everything is digitised now, a lot of advertising goes to digital platforms, you might not even need radio in the end. Start with your own thing and grow from there.

And to those who want to be famous?

Do you know who started the rumour? How did it start?

I first saw the story on some blog, when someone sent me a link. And then a few other blogs, blogs that I would never take my time out to follow or read.

The details of the rumour appeared to be quite detailed, do you see how your fans could have easily believed it?

When I first read about the rumour, I didn’t think there was a lot of detail to it. However, that notwithstanding, it was unfortunate when people started believing the rumour. That was really unfortunate.

So the rumour was completely false, no truth to it?

None. No truth to it whatsoever.

Why you? Why would someone choose to start such a rumour on you based on nothing?

I ask myself that question every day. But I think there are people, some men, who find it threatening to see young, successful, women, who are supportive of each other, and who continue to rise.

I’ve never met some of these people, I’ve never been in a room with them, and for them to go out and create such false narratives is disappointing to say the least.

Was your family affected by the rumour?

My family, bless them, they know me for who I am. I was never worried about them or my closest friends, because I knew they would completely dismiss such falsehoods. Although my dad did reach out to me when someone from Tanzania sent him a link to the story.

Imagine that. But we just laughed it off. I told him such things, rumours, come with the territory, with fame. That was it.

(Shakes head) I don’t know. But misery loves company. Sometimes we just want to see people in pain or hear terrible things about others, to make ourselves feel better.

What do you struggle with the most, when it comes to dating?

Losing myself. When I love someone, I completely lose myself to them and to the relationship. I even schedule my plans around them. It’s a dangerous thing to do. But I’m working on it.

I heard the story of you literally running after a guy, who had jumped onto the boot of a moving vehicle, taking off from you – did this really happen?

(Laughs heartily) It did. We were at a party and I was looking for this guy I was with, the next thing I know, I’m seeing him on the boot and the car is taking off. And yes, I ran after him. (Giggles)

While he was on a moving car? Patricia?

You must have really been in love, were you in love? Or was that just the folly of youth?

Both! Oh, I was in love (reminisces), and yes, I was young too. (Shakes head)

Do you look back and think, “Ah, the things we do in our youth?”

Yes, some of the things people do can only be explained by youth. But the important thing is to maximise on such experiences by always learning and remembering the lessons they come with.

What was the lesson for you in that situation?

That if a man wants to go, let him.

And in your case, that lesson was literal?

(Laughs some more) But yes, let him go, literally or figuratively speaking. Just let him go.

Are you dating now?

No. I decided I won’t date this year, I plan to be celibate. I just want this year to be about me, to find myself again, to understand what I’m about, and to travel. I really want to travel. This is my year of saying say yes to all things travel.

Why is dating out of the picture?

My last relationship did quite a number on me. It was deep, and beautiful, and almost everything I’d wanted a relationship to be, and when it ended, I was devastated, even though I had seen the end coming in some ways.

How do you mean?

He was 29 years old, which meant younger than me, but that wasn’t really the issue, because age really is just a number.

Sometimes people go through stuff when they are at that age, and then he was going through other things on top of that as well, so he just told me we needed to break it off, in order for him to get himself together. It was hard, but I respected the decision.

What advice would you give to someone in their 20s, who is struggling with love?

And for someone who is struggling to deal with an ex either at work, school, church, or neighbourhood, an ex they have to see every so often, what’s your advice to them?

Reclaim your space. I’ve had to learn this lesson myself, don’t stop going to places you like or enjoy because of an ex. You can give yourself a break, but don’t let them stop you. Go back, if not to gain closure, to reclaim your space.

With everything you’ve accomplished so far, when it comes to friendships, do you sometimes feel the need to dull your shine, in order to accommodate your friends? So that they don’t feel too intimidated or threatened?

My closest friends are very ambitious people, they’re always dreaming and striving and kicking it. I love them because we get to challenge each other like that.

If I get a feeling that I have to make myself small for you to feel big, then you’re not a true friend, and I have no business being around you.

Do you cut people off?

(Nods quickly) I do, and I have. And some people can come back after two or so years, when they have themselves figured out, and that’s okay, we can be friends again then. But I don’t force things.

What do you consider to be the biggest mistake you’ve made in life so far?

Procrastination. I’m sure I’ve made many other mistakes, but I think this is the biggest I can think of right now. I procrastinate a lot, but I’m really trying not to be a procrastinator anymore.

You are in your 30s now, do you feel any different?

In some ways, yes. In your 20s, you’re constantly worrying about every little thing. And then you hit 30 and everything changes. You stop worrying about things that don’t matter, and only give your energy to those that do. I now care less a lot.

Funny Posts by Kenyans on Social Media to Take Away Those Monday Blues < Previous
Meet The Badass Female Bodyguard With a Black Belt in Kick-boxing Next >
Recommended stories you may like: