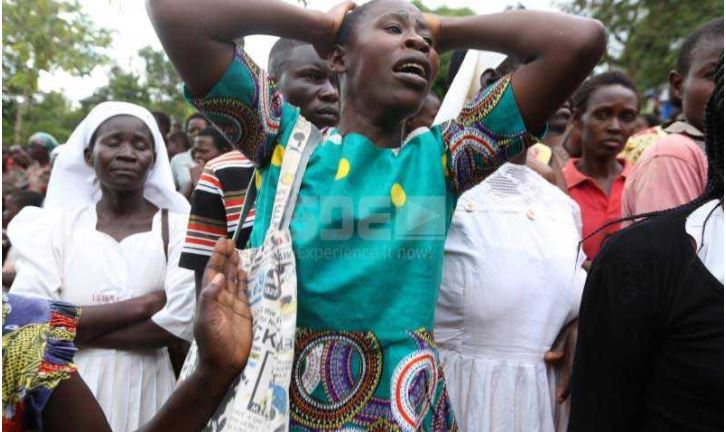 Residents of Masara village in Vihiga County were left shocked Sunday after a woman hacked her co-wife’s three children to death before committing suicide.

The body of Jacinta Adhiambo was found hanging from a rope tied to the ceiling while the bodies of the three children were found lying on the floor. They had deep machete cuts on the necks.

The woman is said to have lured the children aged seven, four and two years, with porridge after a domestic wrangle with her co-wife Hellen Atieno.

Atieno’s oldest child aged nine escaped the woman’s trap by a whisker. He said when he and his siblings got to Adhiambo’s house, she tried to pull the door closed but he became suspicious and stepped outside and ran away.

According to witnesses, after Atieno had left for church, Adhiambo went for the children and offered them porridge for lunch.

The three were then given porridge suspected to have been laced with poison before they were hacked to death.

A neighbor who had seen the children enter the house informed their mother, who headed for her co-wife’s house only to find it locked from inside.

Villagers broke into the house and found the four bodies.

Adhiambo, who was the second wife of Festus Ogonda, was married a year ago and had been living with her husband in Nairobi.

“Jacinta and my husband came home last week to attend my brother-in-law’s graduation ceremony. That was when our differences began,” said Atieno.

“She sent my second daughter on an errand in the rain. My daughter had been sickly and I was worried that she was walking in the rain, so I asked Jacinta about it,” she added.

After an altercation, Jacinta reportedly tried to commit suicide by burning herself in the house but she was rescued. Two days later, she attempted suicide again by ingesting poison but was rescued again. She was admitted in hospital for four days.

Barely a week after the second suicide attempt, she succeeded in taking her life together with the lives of her co-wife’s children.

“This is very sad; the woman should have been sent away after the first suicide attempt,” said Naftal Orwa, chairman of the village peace initiative.

Nameless Reveals the Three Secrets Behind Successful Music Journey < Previous
This is What Has Happened to “Ikamba” Musician After Court Appearance Next >
Recommended stories you may like: