Diamond: I Approached Several International Artistes For Album Launch But They Declined 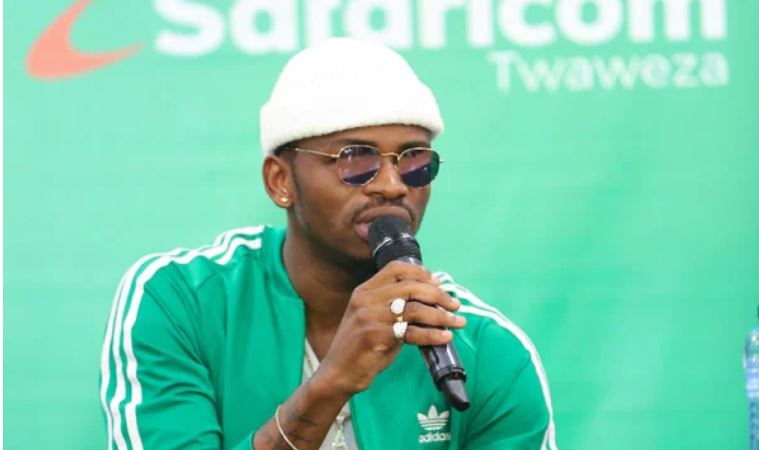 Surprisingly the launch was in Nairobi and not in his hometown Tanzania as many would have expected. The launch was also graced by American R&B superstar Omarion, the only international act who showed up.

According to Diamond, he had invited several artists but they were not willing to.

He sat down for a one on one chat about the album and more.

When is the last time you released an album?
That should be four or five years ago when I dropped my first album Lala Salama.

That’s such a long time considering the fact that you release songs every other day?
Yeah, I know man but it’s because back then we never had proper systems of how we could distribute our albums like we have right now where God has blessed me with Universal Music Group who will be helping me do exactly that.

Why did you decide to do it in Kenya away from home Tanzania?
I came to launch the album here in Kenya because I hate it when people picture me as a Tanzanian musician. My goal has been to prove to people that I’m an African entertainer.

I could have launched it anywhere: Uganda, Nigeria or wherever as long as I’m representing Africa because we have always wanted to have that vision of One Africa.

And that vision is about pushing the African vibe to the rest of the World and not only the Tanzanian one where I come from. Apart from that, Kenyans have been supporting my music ever since I started out and I wanted to thank them for that by launching my album here.

Sometime back, you said the launch would be graced with several international stars but we only saw American rapper Omarion?
Omarion is always ready to work with me. He is always there for me, we have a great connection and you can see that has brought him here.

There are other several artistes that I approached to grace my launch as well but they were not willing to. In fact, one of the songs we’ve collaborated on features in the album.

Just few weeks ago,  two of your songs “Waka” and “Hallellujah” were banned from airplay by the Tanzanian Government through its music regulatory agency BASATA that termed the songs as ‘dirty and raunchy’. Could you comment on that?

To date, I ’m yet to receive official communication from BASATA as to why the songs were banned because that is the standard procedure before such an action is taken. I pay taxes to the government and if they are to ban my source of income then they have to at least explain to me why.

What is the difference between Lala Salama  and A Boy From Tandale ?
The latest one is what I can consider as a proper album from me because the experience I have had right now is very different from what I had with the previous album. You can see how big it is from the way it’s being marketed, the launching plans put in place and things like that which never happened previously.

A Boy From Tandale has 20 songs and if I am to be honest it was supposed to have had even more. This is because there are songs that I did early before Universal Music Group came on board that I felt they were special too.

I requested Universal to let me include those songs as well but they advised we stick to only 20 songs.

Before you launched your label Wasafi Classic Baby, you said you can never sign to any label but today we see you on board Universal Music Group?
That still stands bro. I’m not signed to any label besides Wasafi. What you’re referring to is a a partnership between WBC and Universal. The partnership will ideally help us push Wasafi music to the rest of the World via distribution.

About Wasafi TV and Wasafi Radio fans have been waiting far too long than anticipated for its launch?
Everything has a plan and as you know this is not a small venture. It’s just the other day we received the license from the government to go on air.

Besides that, we have been going round the country to try and get presenters as well as other workforce. With all such activities going on I am not so sure when we will be going on air but my guess is it could be on 25th of this month or the next one.

How has being a father impacted your career?
Well, it doesn’t change anything because I was already Diamond Platnumz before I got the kids. I wanted to have kids early but first I had to learn how I would handle that with the pressure that comes with what I do and I can say it’s been easy for me. I try my level best to divide time for my kids and work which I think I’m handling it pretty well.

Everything You Need to Know About House Music DJ Jack Rooster < Previous
CRAZY: The Funny Pics/Memes Going Viral on Social Media Next >
Recommended stories you may like: