“Blame My Lover For My Death..” Gangster Gunned Down in Parklands Leaves Note 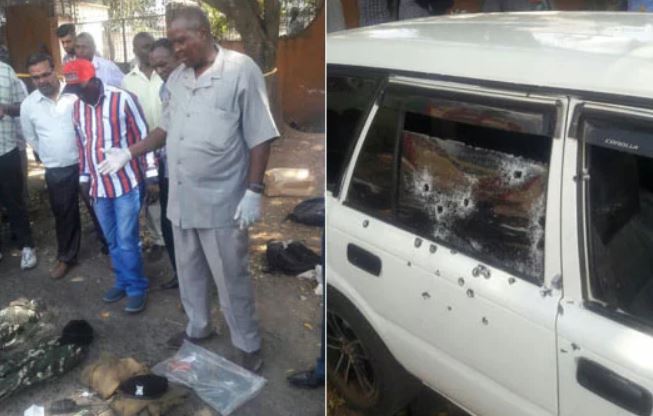 One of the four suspected gangsters shot dead by Flying Squad Officers on Wednesday in Parklands left behind a note indicating his girlfriend should be blamed if he dies.

The note was found in his back pocket moments after he was felled in a botched robbery along General Mathenge drive. It stated that suspect was robbing people in order to support the woman whom police declined to identify.

The note read: “Should I die, ***** should be blamed for my death. I will have died finding money for her.”

The four suspects were gunned down after police received a tip-off. They had reportedly attempted to carjack a customer leaving a bank in Westlands to a construction site in Parklands.

The bullet-riddled car had at least three different number plates.

One of the suspects is believed to have been an Administration Police officer. Their identities could not be established by press time as they did not have identification documents on them.

The four are believed to be part of a gang that preys on people moving into and out of banking halls and ATMs in the CBD and environs. Police are yet to solve most of the reported cases.

All The Trending Pics in Nairobi This Furahiday < Previous
Watch: Eye Witness Recounts Eric Omondi’s Naked Swim Stunt [VIDEO] Next >
Recommended stories you may like: