“She Was So Surprised She Cried,” Mr Seed Recalls Surprise Proposal 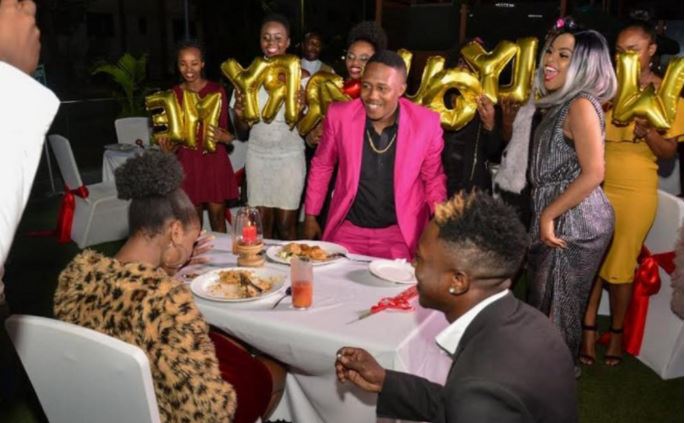 The singer was among the romantics who stole the show on Valentine’s Day after proposing to long-term girlfriend Nimo Gachuiri at a dinner organised by Bountiful Safaris for gospel artistes and their significant others.

According to Mr Seed, he sought counsel from friends before proposing with one of them being DJ Mo.

“Before proposing, I sought the counsel of my friends who are already married. DJ Mo was one of them, and even on the day before I went on one knee, he showed me what to do. This is a big step I have made, and with God, everything is possible.”

The celebrity-studded dinner was graced by the who is who in the gospel entertainment circles, including Size 8, DJ Mo, comedian Njugush, Abel Mutua, Guardian Angel, and Betty Kyallo, but the highlight of the night was the surprise proposal by Mr Seed.

“The dinner was at Azure Resort in Westlands, I planned the proposal on the day. I was so nervous and tense, my stomach had butterflies. She was so surprised. Alilia,” Mr Seed recalled.

An overwhelmed Nimo broke down in tears as the singer serenaded her with lyrics from his latest hit “Oyoyo”.

According to Mr Seed, they are yet to set the date for the wedding.

“We have not yet set the date for the wedding, but when I do, you will know,” Mr Seed said.

“She is so happy right now, her parents are also so happy.”

“Diamond Can’t Offer Zari What I Can,” Ringtone Offers to Marry Zari < Previous
Raped at 15, Married to Abusive Husband at 17… Radio Presenter Annitah Raey Story Next >
Recommended stories you may like: