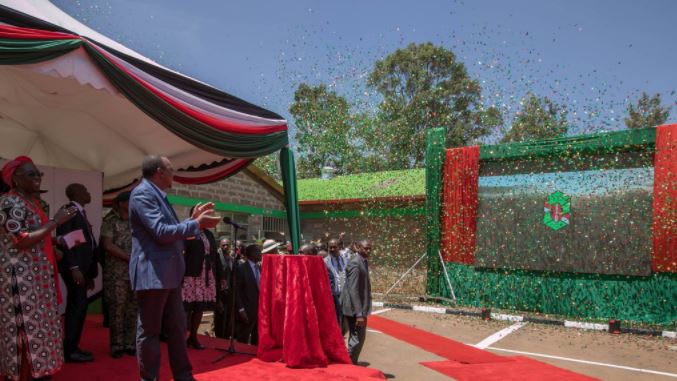 The President said part of the plan to ensure employment, housing, and food security is to ensure that the land stolen from NYS reverts back to the youth.

“We must ensure that we recover all the land that was owned by NYS and taken by people in various parts of the country,” said President Kenyatta, adding, “That land can be put to use to train those amongst you desirous to move into agriculture.”

The President was speaking at the NYS Textile and Garment Institute in Ruaraka when he launched the NYS ‘Tuko Tayari’ (We are Ready) campaign on Thursday.

The campaign is aimed at imparting the youth with skills, which will make them productive in the economy in line with the President’s Big Four Agenda.

Once recovered, the NYS land will also be used to deliver the Housing pledge.

“We will use part of the land that we will recover, to build affordable houses and the youth who work to deliver Food Security and the manufacturing promise, should be the first to benefit. Our youth should be able to own their own houses”

The President further said land in Tana River would be handed over to the NYS so that it can be put to use for commercial agricultural activities.

He also said the government would reclaim and buy other parcels of land on which to build affordable houses.

“We will ensure that you are given that opportunity to use the skills you have acquired from this institution,” said the President.

The President at the same time directed that security agencies’ uniforms be made at the National Youth Service garment factory in Ruaraka, Nairobi.

He said the move would enable the young people graduating from the service get employment when they complete their course at the institute.

“These facilities, which were built many years ago and have been lying idle have now been revamped and put to use. Many of your colleagues who have graduated before you are seeking and finding gainful employment in this facility,” said President Kenyatta.

The Head of State said the youth are the country’s greatest asset that will eliminate tribalism, adding that they will be facilitated to achieve their goals.

He assured the youth of his support and thanked them for the great service they offer to the nation.

The NYS Textile and Garment Institute employs its graduates and has so far made more than 200,000 uniforms for the youth in the service and Kenya Defence Forces.

Youth Development Principal Secretary Lillian Mbogo-Omollo, said the youth are at the centre of the President’s Big Four Agenda.

He said the NYS is well equipped for its role in training and imparting skills on the youth.

The Trending Images in Nairobi Today < Previous
“How Dare You Weep?..I am With Raila,” Moses Kuria Slates Kalonzo Musyoka Next >
Recommended stories you may like: