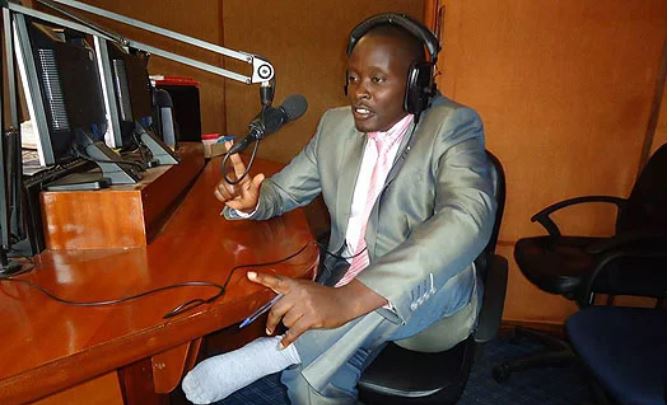 For about a week now, there have been widespread reports that radio journalist Moses Kanyira was contemplating suicide after losing his job at Kameme FM.

In a worrying Facebook post, the presenter confessed to having suicidal thoughts citing a trying period in his life. He said he would have taken his life if not for God.

He wrote: “Am passing through the most trying period in my life. If it is not my God, this can amount to commit(ing) suicide.”

While the presenter did not give an indication that he was sacked, it was Facebook blogger Wahome Thuku who broke the news. He claimed that Kanyira was sacked last Monday after he exposed the water problems in Murang’a.

Unverified reports further claim that the presenter disclosed how the Kenyatta family is diverting water from Murang’a County to their upcoming Northlands City.

Wahome wrote: “According to sources close to him, Kanyira was dismissed today [Monday] for speaking about Murang’a’s water problem on radio. Apparently, the show he aired did not go well with the Muranga county bosses and the station top management/owners.

“Kanyira sent a very emotional farewell message to his colleagues today. He says the events today almost led him to commit suicide. Losing a job when his mom is in hospital.”

This caused an uproar among listeners of the popular vernacular radio station who sympathised with Kanyira’s plight.

The presenter is said to be deep in debt in addition to taking care of an ailing parent who requires constant care, treatment and, medication.

In the latest development, Kameme FM management has finally come out to clear the air. In a statement posted on social media, the radio station denied sacking anyone saying it stands for real issues affecting people.

The statement “Let me make this clear. No one has been fired from Kameme FM. Least of all, no one will ever be fired for speaking about real issues affecting our people. It’s what Kameme actually stands for. To us it’s the people who matter. How can anyone be fired for speaking about our listeners problems? Forget anything else you read on social media. That’s the real position. Guys, only this week, social media had killed Syvelster Stallone!!! Don’t believe everything you read. Thanks. Much love.”

All The Trending Images This Wednesday < Previous
Jubilee MP Proposes Creation of Prime Minister’s Post, Seven-Year Presidential Term Next >
Recommended stories you may like: