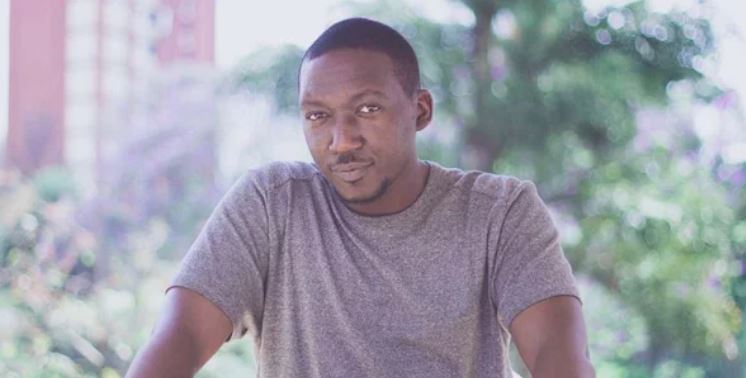 David Oyuke is the quintessential Jack of all trades. Known by his stage name, BlackSkillz, David is a poet, voice-over artist, communications professional, radio host (Hot 96) and hip-hop artist.

He also has a poetry collection, Flowers in A Broken Vase, which he began writing in 2014 and recently got it published.

I’m actually the flat cap type.  I wear a couple of hats though because I am also a voice narrator, leadership facilitator, husband and a hopeful Arsenal fan.

Well, I think I’ve come to appreciate how all these roles merge and work in unison. It is easy to have them all work together when at the core of each is an unmovable purpose. I’m passionate about people and the stories each carries with them. Everything I do is anchored on that, so it is very fulfilling to get an opportunity to maximise what I am passionate about through different fields.

I’m extremely excited. I began writing it late 2014, and completed it in 2015. It is a book about overcoming the various challenges that life throws at you, rediscovering self-worth and how much we human beings matter in a world that quickly renders people invisible. It’s a book that I hope can remind people that they matter despite everything happening around them, a book for #ThoseWhoDream (the hashtag attached to the launch and the book), thus Flowers In A Broken Vase.

Writing the book was a point of joy, but waiting that long to see it published was an emotionally bruising affair. I had to battle to still see myself as a poet after so long.

I would have published it sooner had it not been for financial constraints. Eventually, two people came through and ensured the book came into being. My wife and I chose self-publishing to be in control of the process, to be the curators of what it is and what it represents, which leaves no room for misrepresentation that would likely occur if I contracted a publishing house to do the job for me.

My life certainly influences my art. My wife’s support has been tremendous. She helped edit my book and basically worked on it as if it were her own, so she finds a sense of joy in it as well. The truth is, everything that comes from within us as creatives is viewed from different lenses. Marriage is a tremendous lens for me. Having someone you believe in and who believes in you, someone you get to build a life with, makes you see the world through more forgiving eyes, eyes that know that this world is full of possibilities if only we worked together. I get the privilege of carrying some of these things into my art and I believe it is the same with other people who take aspects of their life into their art because ultimately, our art and our life are most of the time endless reflections of each other.

It is a remarkable place to grow in. When that microphone is on, it stops being just about you, the person speaking, but about the person listening as well. I’ve grown to care for those who listen to me, they aren’t a means to an end, but amazing and unique individuals.

I’ve learned that in radio, just like any other field, you need to know who you are or you will end up reflecting everything and everyone that comes your way.

Authenticity is a currency few trade in. Know your value, and then value your value. Never lose yourself. If you end up changing, then let that change be kinder, more appreciative, more inspiring. Your talent can be remarkable, but who you are inside is the real gift that no one can duplicate.

Watch: Mr Nice Tells Off Haters in Second Music Video After Hiatus < Previous
“I Have Sh50 Million so Money is Not a Big Deal,” Papa Dennis Says as he Releases New Video with Flavour Next >
Recommended stories you may like: