Revealed: When and Where Raila, Kalonzo Will Be Sworn In 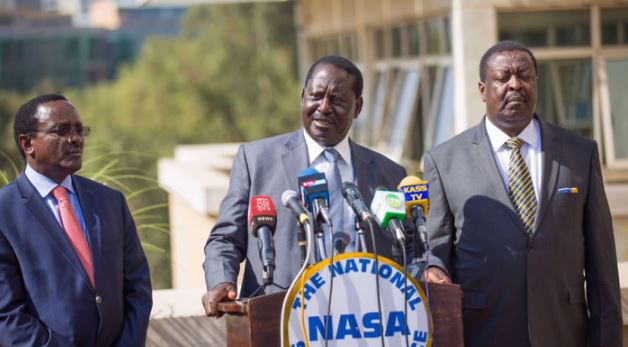 The highly anticipated swearing-in ceremony of NASA leader Raila Odinga as the People’s President has been scheduled to take place before the end of this month according to the People’s Assembly organizing committee.

The committee, chaired by economist and NASA strategist David Ndii, said the Assumption of Office team was fine-tuning the oath-taking plans.

“The swearing in of the NASA leader is well on course and the Assumption committee, to be named soon, will announce the exact details,” Ndii said in a presser on Thursday.

“We are of course alive to the fact that the public is very eager to hear about the swearing in of the People’s President and Deputy President. This is on course. It will be the biggest public event that Kenya has seen since independence.”

NairobiWire has learned that the Opposition intends to swear in their two leaders at Uhuru Park grounds in Nairobi after a series of rallies and meetings in several counties.

NASA said it will resume the campaign for electoral reforms in Kakamega County this Sunday to ensure electoral justice and self-determination in the country.

“The details of the program and nature of events to be held in Kakamega will be disclosed by the NASA leadership in Western Kenya.”

Wiper Party leader Kalonzo Musyoka is also expected to play host to his co-principals who plan to tour the Ukambani region in mid- January to launch the People’s Assembly forum in Machakos.

North-Eastern region is also on the opposition’s radar with a planned joint meeting in Garissa town, before the leaders head to Mombasa for a rally in the run-up to the swearing in.

Narok, Migori, and Kisii counties have also been scheduled to launch the people’s assemblies with Gusii stadium expected to host the last rally before the swearing in.

Donald Kipkorir Reveals Why President Uhuru Should Fire Three Ministers, Including Matiang’i < Previous
Blow for Shisha Smokers as Court Declines to Lift CS Mailu’s Ban Next >
Recommended stories you may like: