Show me someone who hasn’t received a suspicious text message from the infamous Kamiti cons and I will show you a liar. These texts range from fake MPesa messages to ones claiming that you have won a significant amount of money.

These scammers are ever changing tact and always coming up with new ways of extorting money from gullible Kenyans.

While most people ignore the messages, there are those among us who have engaged the cons, mostly for entertainment purposes on social media.

One such person, identified as Paul Jims, has shared screenshots of an interaction he had with a supposed Kamiti prisoner. The interaction was, however, different from what we are used to, as the prisoner in question had a simple request; sh200 to buy bathing soap.

Paul then responded asking the inmate for his details so he could visit him in prison instead. The inmate gave his details and advised Paul to visit on a Friday. He further requested for a toothbrush and toothpaste.

Paul posted the screenshots on a popular Facebook page, and captioned them: “I don’t know this guy but he sounds somehow genuine.” 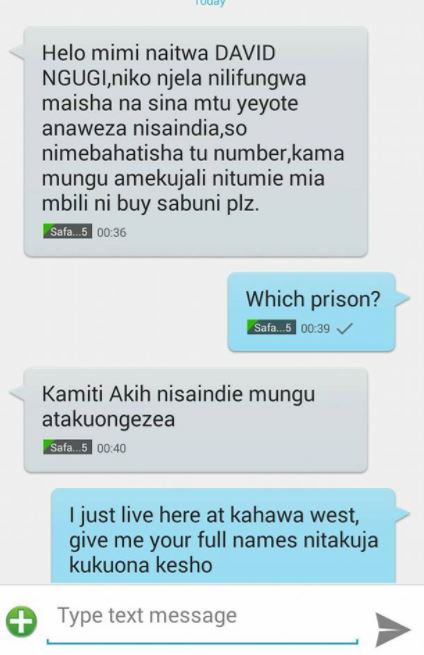 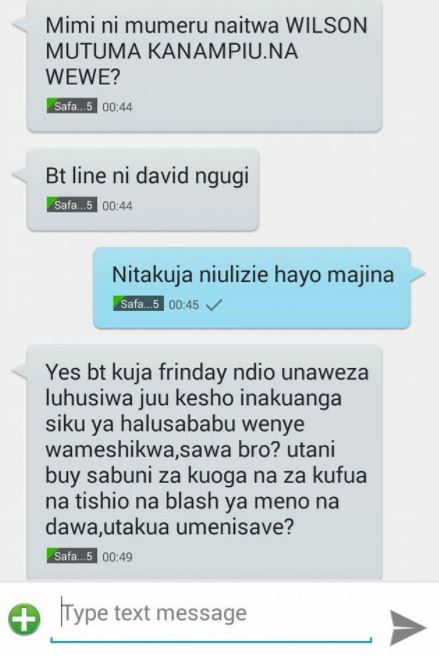 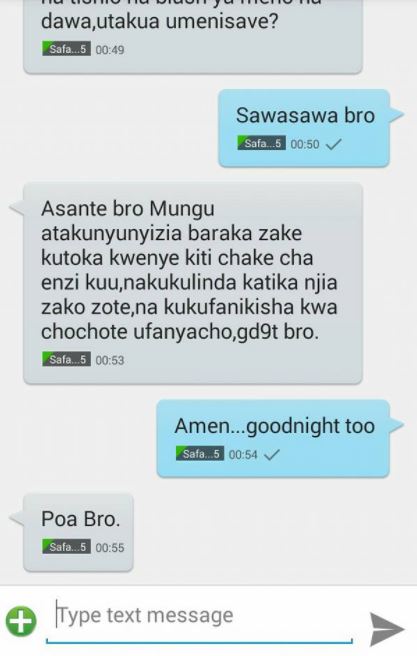 The screenshots elicited mixed reactions from netizens, with a majority believing that the guy was genuine. The sceptical ones questioned why the inmate gave different names, while others pointed out that the screenshots maybe fake. 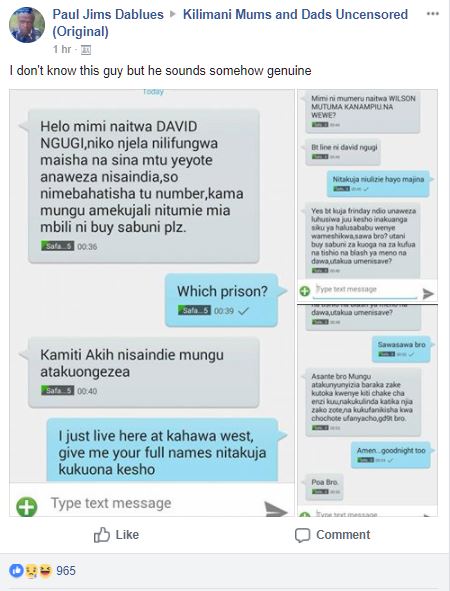 Another Facebook user, Once More, wrote: “To me the story looks genuine 100%, it happens that’s how kamiti inmates work they just call any number which comes up in to there minds. Ukimuskiza anaangukia. Just help the guy I wish ningekuwa karibu ningekupeleka that Friday.”

Stacey Simon’s added: “Buy the requirements he asked for and if you have to go don’t go on that specific day he asked you to and again get like 3 or 4 strong guys to accompany you. He is too open to be trusted. Waweza kuwa wapangiwa jama. Be on the look out. Na after umeenda please bring back the results.”

Karimi Josphine wrote: “Afadhali huyu mwenye hatumi zile message za kucon watu. He sounds genuine. Visit him but go with some other 2 or 3 friends. That’s how blessings come. Na ni verse gani ile husema “I was jailed and you didn’t come to see me?”. Go see this guy.”

Do you think he’s genuine?

Shaffie Weru Acquires Swanky New Range Rover, Brags “Njaanuary is a Myth” (PHOTOS) < Previous
Never Before Seen PHOTO of Senator Murkomen When He Was a Preacher Next >
Recommended stories you may like: