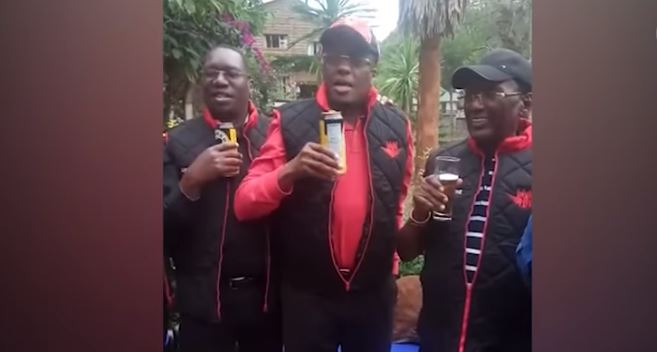 A video of the departing Nairobi County Deputy Governor Polycarp Igathe making an Australian toast in the company of friends has emerged.

Igathe, who is serving notice of resignation as Nairobi’s Deputy boss, is seen in the video using the ‘F’ word in the interesting toast. The video was recorded immediately after he was sworn in but the timing of its release has been seen by some as an indirect attack on Governor Mike Sonko.

In the jovial video, Polycarp Igathe and his friends, including city tycoon Chris Kirubi, is seen toasting to friendship over a drink of canned beer.

While cracking open a cold one, Igathe proposes a toast, which he says he learned during his days in Australia.

“Okay gentlemen, I must teach you the Australian toast. I learnt it when I got my first job in the state government of Queensland. And this is how they used to toast, they have a wonderful toast and since we are all men here and there is no lady we will do it to the letter,”Igathe says.

The one-minute clip ends with a rapturous laughter from the fellas.

This is a very good toast. Adopting it

Nigga can only speak up at the Alcohol den????

All The Trending Pics in Nairobi Today < Previous
What President Uhuru and Kenyan-born Australian Senator Gichuhi Discussed at State House Next >
Recommended stories you may like: