Projection: 5 Counties Raila Odinga Will Perform Better Than in 2013 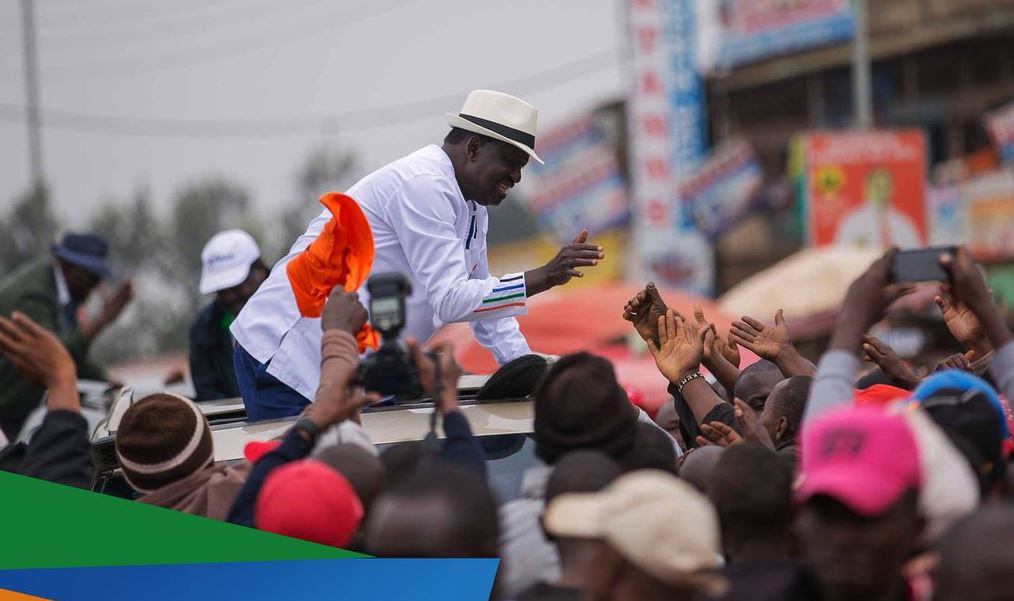 We’re counting down to Tuesday and what seemed so far is now just a matter of days. Kenya goes to the ballot next week in what has been termed ‘Raila’s last bullet’.

Technically, Raila Odinga can still vie in 2022, but by then he will be 77 years, which is not exactly a prime age in politics. There is also the small matter of an MOU with Kalonzo which states that Raila will be a one-term president. However there are those in the school of thought that power is so sweet that Raila will find it difficult to honour such a deal should he become president.

But before 2022, we have to deal with the present. What are Raila’s chances?

In theory, Raila has better chances this time round than in 2013, because he has the support of Musalia Mudavadi. Even without much thought, Mudavadi adds almost 4% to Raila’s 2013 result of 43.7%.

That’s significant but still won’t matter if Uhuru crosses the 50+1 threshold as he did in 2013.

It was therefore critical that Raila comes up with a strategy to eat into Uhuru’s base. He did this right from the word go, particularly eyeing Meru county. From the way our tribal country is set up, there are some regions you’ll never get anything unless you have the blessings of the tribal chief. The more you expand outward of these regions, the language spoken starts showing mild differences. A clever politician can exploit this, and this is what Raila did in Meru.

Even towards the 2013 election, Raila had identified Meru as a region ready for harvest. The fact that Mt. Kenya leadership seems to start and end with the Kikuyus provided him good campaign material. Showing them that they have been ignored by their ‘brothers’ and are only used to boost poll numbers.

It was not a walk in the park and to abruptly change voting patterns is very hard. Nevertheless, ODM got an MP in the region against all odds. This was a big sign to Raila that the ground there was more friendly to him now.

He may have performed dismally in 2013, but since then, he only boosted his strategy to raid the region. Raila has made countless trips to Meru and there is enough reason to believe this time round he will do commendably well.

Current governor Peter Munya is not a fan of Jubilee though his party officially supports Uhuru’s re-election. In fact, there are some moments when he has come just short of endorsing Nasa. But still, he is seen as a favorite in the battle between him and Jubilee’s Kiraitu Murungi. This is another clear sign that though the ground has not completely shifted towards Raila, it is not hostile. A few weeks ago when Munya was asked whether Meru was now a Nasa zone, he refused to confirm or deny, making it obvious that it’s not business as usual for Uhuru.

Betweeen Isaac Ruto and Joyce Laboso, who will win the race? I would say it is too close to call.

Jubilee is taking this county seriously and have been to Bomet about 3 times this campaign period. It’s probably the one county that has received the most presidential visits last 1 month. That’s because Uhuru and Ruto understand and appreciate the threat posed by Isaac Ruto.

Isaac exalted himself to national prominence through Raila’s Pentagon. I believe adding Isaac as a principal was more beneficial to Isaac than to Raila. Deputy President William Ruto’s base was not going to be shaken by a mere governor. Honestly, Ruto outsmarts Isaac in everything. From charisma, to display of power, to eloquence.

But Isaac strategy was quite good after falling out with Ruto and Jubilee. The only way he stood a chance to recapture his seat was by raising his profile greatly. Transforming himself into a national leader has helped him on the ground, and I’m sure a lot of people in Bomet will vote for him for this reason.

It goes without saying that not all of Isaac’s vote will translate into Raila’s votes. Indeed there are those who will stick with him but defy him when it comes to their presidential preference. But realistically, Raila can expect much more votes in Bomet than he did in 2013. There is no way he can go lower than 4%, especially now that he has a strong point-man on the ground.

Well, this should be pretty self explanatory. With Mudavadi now being a Nasa member with a promise to be a senior cabinet member, the Western Kenya votes are only going one way.

And also this being Western, the current (recent) unga shortage will not go down well for Jubilee. Though the Sh90 unga is now available in supermarkets, most people will probably dismiss it as an outright bribe.

Uhuru’s numbers may not change much, but Raila will see a great increase.

For some reason, Raila has been predicted to do better in Nairobi this time round. The capital is a cosmopolitan place. It also has probably the highest percentage of free thinkers. That’s why all signs show that Raila will win, though his preferred candidate Evans Kidero is not having a similarly easy ride.

In a city like Nairobi, it is easy for people to confuse county functions with national government functions. Service delivery has been non-existent for the last 4.5 years, and Uhuru will take in probably as much blame as Kidero, whether rightly or not.

The other reason why the ground may be better for Raila in Nairobi is the literacy levels in the city. The constant news about corruption during Jubilee’s term probably irritated more Nairobians than the rest of the country, simply because they have a smoother flow of information and most have the education levels needed to analyse this information and get angry.

At the end of the day, tribe will still come into play, and that’s why Nairobi cannot still be classified as an outright Raila stronghold.

There is a sense that Raila has gained more among the Maasai than Uhuru. Though there’s no supporting data, it looked likely that Raila came out the victor between him and Uhuru when showing who was Ole Ntimama’s favourite. It was indeed here in Narok that Uhuru made the now (in)famous remark, ‘Mtameza mate sisi tukikula nyama’.

Another sign that Raila may do better is the current gubernatorial race. The incumbent is Jubilee, but there are two Nasa affiliated candidates. One on an ODM ticket and another on a Chama Cha Mashinani ticket. This does not happen everywhere, but only where the ground is favourable.

His preferred governor might not win, but I believe Raila will emerge victorious again in Narok, and possibly increase on the 2013 percentage.

The above analysis is an opinion based on observation of the ‘mood’, and not supported by any scientific numbers.

Prediction: Waititu Will Beat Kabogo Again, To Be Next Kiambu Governor < Previous
The Hottest Stories on the Internet Today (Thursday August 3) Next >
Recommended stories you may like: