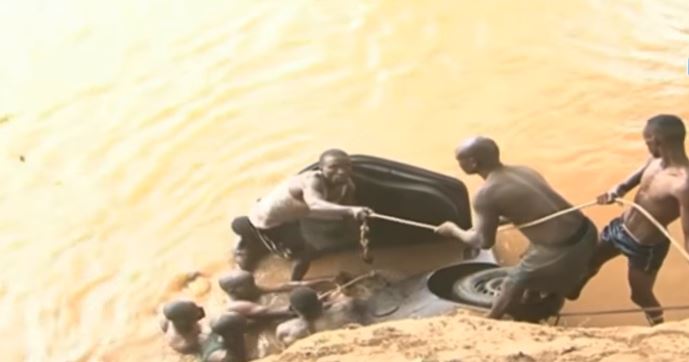 Two people are feared dead after the car they were traveling in veered off the road on Sunday and crashed into the crocodile-infested River Tana in Bura constituency.

According to Garissa police boss Aaron Moriasi, two others, the driver and codriver, managed to swim to safety.

They were treated for minor injuries and shock and later discharged.

The missing people were identified as Cyprian Ogallo, a student at NEP technical college, and George Onyango, a teacher in Garissa town.

The survivors are driver David Wendo, an NIS desk officer based in Garissa, and Beryl Atieno.

The police boss said the car was traveling from Madogo to Garissa, but the occupants diverted to a local social joint in Mororo at 9.30pm, when the driver lost control of the vehicle.

“Police officers rushed to scene immediately and cordoned off the scene. Unfortunately, the other two never surfaced,” Moriasi said.

“We shall confirm their status when we retrieve them either alive or dead from the river. At this point, we are doing everything within our powers as a police service to ensure that the vehicle and the two victims are taken out of the river.”

UPDATE: The bodies of the two men believed to be brothers have been recovered 17 hours after the vehicle plunged into the crocodile infested river.

Even Before Taking Office, Anne Waiguru Starts ‘Governor’s Duties’ in Kirinyaga < Previous
Hilarious Meme Compilation (Wednesday July 19) Next >
Recommended stories you may like: